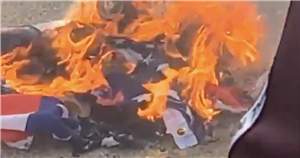 Manchester United supporters have been filmed burning an American flag outside Old Trafford as they continue to protest the Glazer ownership of the club.

Red Devils fans have lost their patience following the recent European Super League downfall, and have attended their beloved ground in large numbers on Saturday.

As well as showing off banners and lighting flares, one small group could be seen huddled around what appeared to be a flag of the United States.

Although the latest move has reignited fan fury, there has been criticism of the Glazers for many years with Avram refusing to apologise when approached by Daily Star US Editor Chris Bucktin.

The protest comes after supporters visited their Carrington training ground on Friday, with Ole Gunnar Solskjaer coming outside to speak to fans.

A statement from the club reads: "At approximately 9am this morning, a group gained access to the club training ground. The manager and others spoke to them.

“Buildings were secure and the group has now left the site."

Solskjaer said of the ESL: “First of all, I'm very happy that the fans have voiced their opinion. And that we've listened to them.

“In a strange sort of way, it's brought the football pyramid or community together.

“I think that's important and I'm very happy as I'm a supporter myself and there will be a day I come back and watch Man United and I want to watch a Man United team even with a fear of failure, you know, that's what I thought about it.

“I didn't like the concept anyway. It has to be on sporting merit. I want to earn the right to play in Europe. We know we have been pioneers and have been in Europe many, many years since the Busby Babes.

“That's one part of it and we want to be part of a successful European campaign again.

“One of my best nights has been in Europe and it's something we worked really hard towards, to get that. There's that feeling of fear of failure. You cannot just be given it because your name is such and such.

‘You have to earn the right to be there and to get the best possible performance, I've always felt and believed in stepping out of your comfort zone.

“Being afraid of failure, and living on the edge a bit, spurs you on.

“For me, this wasn't part of it and I'm very happy that all the clubs have admitted their mistakes. This was a bad idea, and the way that it came out as well.”

READ MORE: Super League survey: Tell us what you think of the Big Six punishment