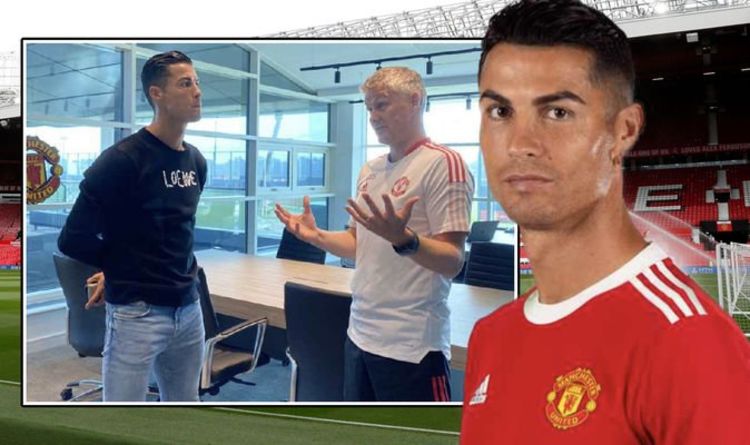 Manchester United have dropped a major hint that Cristiano Ronaldo will make his second debut for the club against Newcastle this weekend. The Portuguese megastar was pictured at Carrington with Ole Gunnar Solskjaer today, amid fears that he may have had to isolate after returning from international duty.

One of the hallmarks of a dramatic summer transfer window was Ronaldo sealing a sensational return to the club where he made his name in a £12million move.

Before linking up with his new team-mates, he first joined Portugal for international duty where he made as dramatic an impact as usual.

In Wednesday’s match against the Republic of Ireland, the 36-year-old notched two late goals to both win the game and break the all-time international scoring record.

It had previously been reported by The Sun that he could miss the tie against Newcastle, with a mandatory five-day quarantine following his return from Portugal.

However, the picture posted to the club’s social media account showed Ronaldo and Solskjaer in deep conversation at United’s training ground.

Previously, it was believed that his isolation period would only allow him one training session with the Red Devils before Saturday’s encounter with the Magpies.

This update suggests otherwise, with plenty of time for the former Real Madrid and Juventus man to get up to speed before the weekend’s action.

It will be an emotional day for the Old Trafford faithful, who bid farewell to their star back in 2009 when he joined Los Blancos in a then-world record move.

After a blockbuster summer of transfer activity, expectations will now be through the roof for the red half of Manchester, despite the fact a number of their Premier League rivals have also strengthened considerably.

Jadon Sancho has already appeared in three games this season, Raphael Varane made his United debut against Wolves, while Ronaldo is the last of the bunch to take to the pitch for his new (old) side.

Ronaldo’s availability could come as ominous news for the likes of Jesse Lingard and Mason Greenwood, however, who have both made solid starts to the season and may find it tricky to keep their respective places in the side.

Solskjaer and co. will undoubtedly be pleased at the start they have made, with a 5-1 thrashing of Leeds United getting the ball rolling followed by a draw at Southampton and a tricky victory at Wolves.

The performances in the latter two ties left much to be desired, although their ability to grind out results which put points on the board will be satisfying in itself.

Although the Portuguese is certainly towards the back end of his career, a goal-rampant stint at Juventus suggests he still has plenty to offer in the Premier League.

Last season, he left Serie A in his dust with 29 league goals, five ahead of Romelu Lukaku who was awarded the division’s Player of the Year award.

If he could get anywhere close to that in red, United fans could be in for a treat. Getting off to a scoring start on Saturday would be a fine way to set him on that path, as well as mark an emotional return to a club he left over a decade ago.