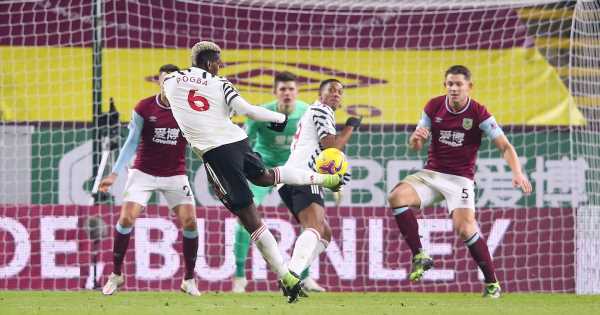 Manchester United limped to the top of the table thanks to a moment of brilliance from Paul Pogba at Turf Moor.

The French superstar struck with a sublime volley on 71 minutes to help United overcome a stubborn Burnley outfit and leapfrog Liverpool at the summit of the Premier League.

The performance will hardly send shivers down the spines of their title rivals.

But this won't bother Ole Gunnar Solskjaer, whose side are now looking down on the rest after 17 games of the season for the first time since December 2012, when Sir Alex Ferguson was boss.

Solskjaer made wholesale changes from the side that edged past Watford in the FA Cup last time out.

Eric Bailly was the sole survivor, while Cavani returned from a three-match ban along with the likes of Pogba, Bruno Fernandes and Marcus Rashford.

The Clarets, who needed extra time and penalties to overcome League One minnows MK Dons in the FA Cup last weekend, made four changes.

The Clarets had picked up points in recent weeks to climb out of the relegation zone and were looking to win three league games on home soil for the first time since 2017.

But Turf Moor had been a happy hunting ground for United of late, with them winning on their last four Premier League visits here.

Solskjaer's men also came to town unbeaten on the road and high on confidence following 10 league games without defeat, to leave them sitting on the shoulders of Liverpool at the top of the table.

Solskjaer insisted the table meant nothing to him at this stage of the season due to the topsy-turvy nature of a campaign being played out in exceptional times.

But deep down he knew overtaking his most bitter rivals ahead of a trip to Anfield on Sunday would be a huge boost to his side.

It was United who threatened first on 15 minutes when Fernandes's instant shot stung the palms of Pope, before Anthony Martial's overhead kick was blocked by Matt Lowton.

At the opposite end the Clarets nearly punished a mistake by Fernandes when Ashley Westwood and Ashley Barnes combined to set up Chris Wood, whose shot deflected inches over the top off Bailly.

The Clarets were happy to go toe-to-toe with United, but Martial wasted a chance to fire the visitors ahead when Nemanja Matic played him into space, only for the Frenchman to shoot hopelessly wide.

It might have been freezing but tempers were hotting up on the pitch.

Luke Shaw was lucky to avoid a red card after a crude challenge on Johann Gudmundsson, while Cavani was locked in a running battle with James Tarkowski and had to be told to calm down at least twice before half time.

Harry Maguire was also seething after having a goal harshly ruled out for climbing on Erik Pieters and made his feelings known to Kevin Friend, while Solskjaer was producing some industrial language from the sidelines.

Cavani's mood didn't improve when he fluffed a golden chance on 52 minutes, scuffing his shot from close range following a rapid break involving Pogba, who then showed him how it's done with a moment of magic to send United three points clear of the rest.