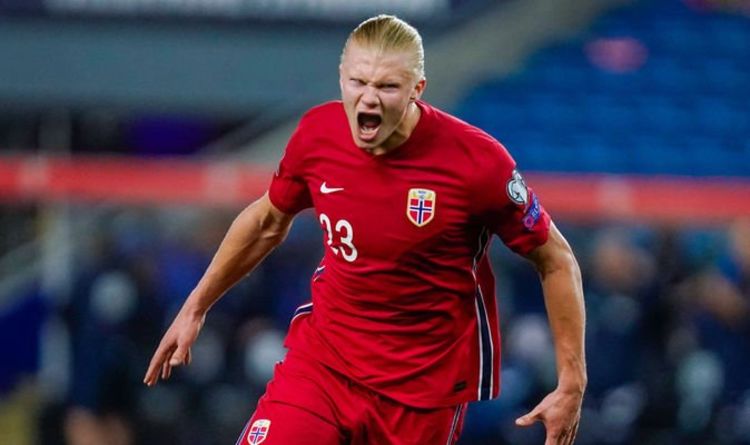 Liverpool and Manchester United have been linked with Erling Haaland ever since he burst onto the scene at Borussia Dortmund in 2019, but have been dealt a blow as Real Madrid have reportedly agreed a verbal agreement with the German side for his transfer next summer.

Haaland, 21, has been arguably the world’s best striker ever since his move to the Signal Iduna Park by tallying a superb 63 goals in 64 games under the guidance of Lucien Favre, Edin Terzic and Marco Rose.

However with Dortmund rarely threatening in the Bundesliga and very occasionally achieving European success, the time will inevitably come for Haaland to leave.

Each of England’s top four have been linked with a move for the Norwegian superstar as they look for strikers.

And with Liverpool in need of fresh talent up front and Edinson Cavani’s contract expiring next summer, they could well be the lead suitors for his signature.

Real Madrid look set to spoil the party though, if reports are to be believed.

According to Diario Madridista, Paris Saint-Germain, Manchester City, Liverpool and United had all tried to sign Haaland in the summer window yet both club and player turned them down.

Apparently Dortmund respected the advances of Madrid when they were notified Haaland was not for sale. They quickly understood the club’s stance and exited negotiations quickly – thus putting them at the forefront of Dortmund’s list.

Furthermore, the report states that Real have Haaland’s word that he will sign, alongside Kylian Mbappe who is likely to sign for the Bernabeu-based outfit on a free in 2022.

It would represent arguably the most exciting young attack ever in world football if the duo were to join Vinicius Junior in a front-three.

Haaland spoke out about interest from the Spanish giants in March, claiming he was happy at Dortmund.

But with the Spanish club making him their number one target, it may be too much to turn down for the Norwegian.

“I still have a three-year contract. I’m not unsettled by that,” Haaland said.

“The media is the ones who write about it, I don’t focus on those things.

“I want to improve every day. Ronaldo and Messi… I don’t need to talk about them, they are among the best of all time. They are still far away, so to speak.”