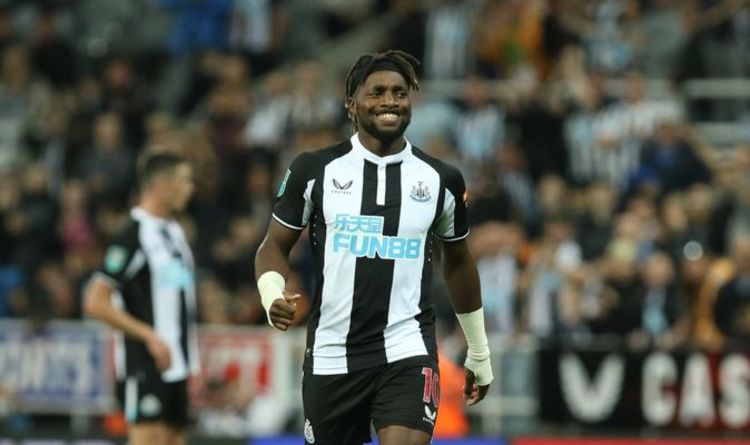 Newcastle United midfielder Allan Saint-Maximin fired a warning towards Manchester United saying “I know what I can do,” ahead of The Magpies’ visit to Old Trafford. All eyes will be on The Red Devils with Cristiano Ronaldo expected to make his second debut for the club.

The former Real Madrid and Juventus hitman returned to United 12 years after joining Real for a record breaking £80m.

However, Saint-Maximin is looking to spoil United’s Ronaldo celebrations and believes he could be the one to take centre stage.

“I will try to do my best because I’m sure the world will watch this game because of Ronaldo, but I know my quality,” Saint Maximin said to NUFC TV.

“I know what I can do on the pitch, and I know it’ll be a really hard game against Manchester United.”

“I know we have a tough game at the weekend against Manchester United.

We are working a lot in training which is why I feel a little bit tired but it’s really important, because we need a win.

We need the win to start the season and even if we play against Manchester United, we know if every player gives the best they can give, we can win this game so let’s do it.”

The Frenchman has enjoyed an impressive start to the season for Steve Bruce’s side, with a goal and one assist in their opening two games.

Unfortunately for the former Nice and Monaco forward, Newcastle are yet to register their first three points of the season, with two defeats and a defeat in their opening three matches.

However, Saint-Maximin warned they are snot to be taken lightly and they will do everything to gain a victory at Old Trafford.

“Even if it’s Manchester United it’s not like they’re invincible,” said Saint Maximin.

“We have to keep going and to try to do the best things we can do to win the game. If we can’t win then we don’t want to lose. That’s the type of mentality we have to have.

“The Premier League is really tough. I saw their game against Wolverhampton and Wolverhampton had a lot of chances to win the match.”

“Even before Ronaldo signed, they had a great team, and they win games. So, for sure, with Cristiano Ronaldo now, they look much better but we have to stay focussed.”

United overcame Bruce’s side home and away last season, following up a 4-1 away victory at St James’ Park with a 3-1 home victory at Old Trafford last February.

However, Saint-Maximin put in impressive displays against Ole Gunnar Solskjaer’s side in both fixtures, and he feels ready to cause havoc again.

“I scored there last season at Old Trafford but we didn’t win the game,” said Saint-Maximin.

“That’s what I always say – I don’t care about scoring, it’s more important that my team win.”