Carlo Ancelotti’s Real Madrid, the Bayern Munich machine, Ajax’s Total Football pioneers… only a few record-breaking teams are now left for Man City to catch after they made it 20 victories in a row – including Welsh club The New Saints!

History beckons in all directions for Manchester City. Not only could Pep Guardiola’s team finish this most unique of seasons with a trophy Quadruple, they could re-write the record books in the process.

Their 2-1 home win over West Ham on Saturday was their 20th consecutive victory in all competitions, a run dating back to their 1-0 success at Southampton back on December 19.

In that time, City have made progress towards history in all four competitions, whether it be opening up a seemingly unassailable 12-point cushion at the top of the Premier League, reaching the Carabao Cup final, the last eight of the FA Cup or placing one foot in the Champions League quarter-finals. 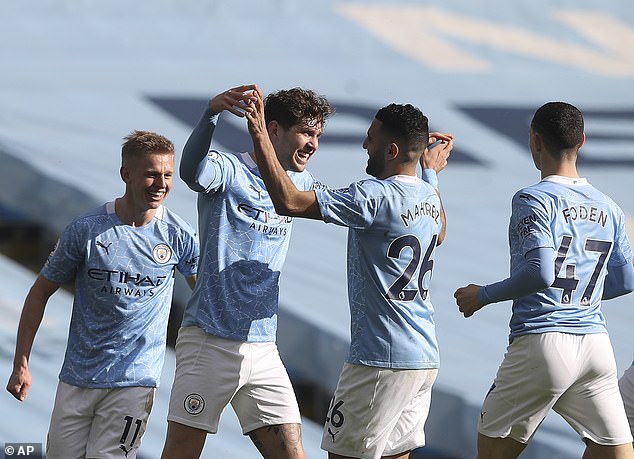 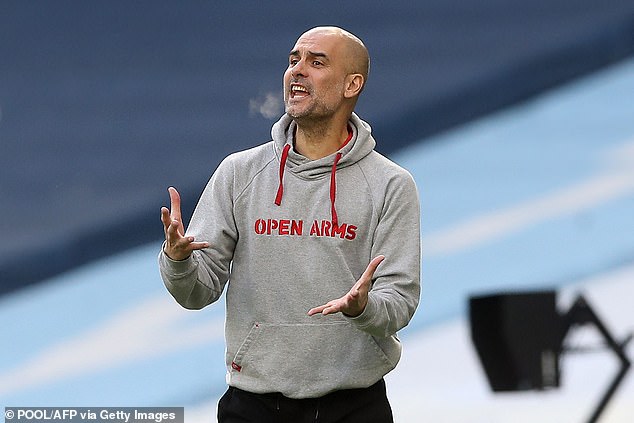 During an extraordinary 70 days of invincibility, 51 goals have been scored by 15 different players and just seven goals have been conceded, with a remarkable 13 clean sheets.

It all means that City have established a record for an English top-flight club and settles the argument as to whether an identical feat achieved by them in 2017 was valid because one win was on penalties.

However, this could be just the beginning. If City continue to win in the weeks ahead, they could surpass the record winning runs of some outstanding teams.

And if they win their next eight games – starting against Wolves at home tonight – they will establish a new record for a top-flight team anywhere in the world. Here’s the full breakdown of how they could do it.

City are next in action at home to Wolves on Tuesday night. Winning this one wouldn’t equal or surpass any records but would obviously keep the run going. Not to mention further strengthening their grip on the league title.

It’s the big one for City on Sunday as they host Manchester United. A win in the derby at the Etihad will pretty much sew up the title, baring the most dramatic of collapses in the home stretch.

It will also equal the 22 consecutive wins achieved by Carlo Ancelotti’s Real Madrid side during the 2014-15 campaign. 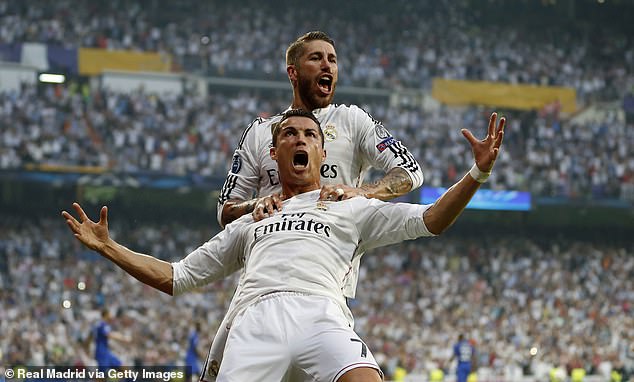 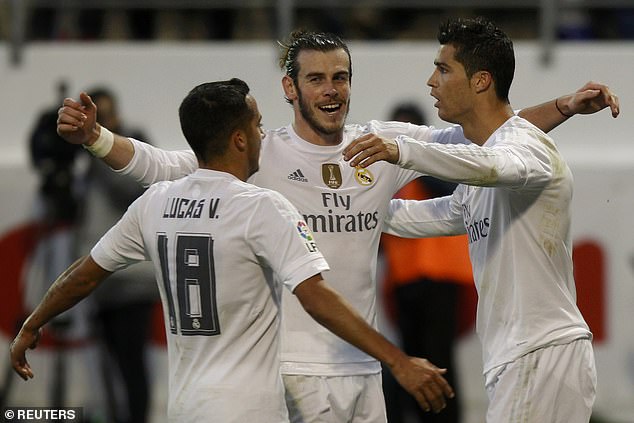 Between September 16, when they thrashed Basel 5-1 in their opening Champions League group game, and December 20, when they beat San Lorenzo 2-0 to claim the FIFA Club World Cup, Real won 22 games on the spin.

The streak was broken on their return from the tournament in Marrakech, when Valencia beat them 2-1 on January 4.

What’s eye-catching is the sheer number of goals they scored. In 13 of those games, they scored four times or more, the stand-out being an 8-2 win at Deportivo La Coruna. 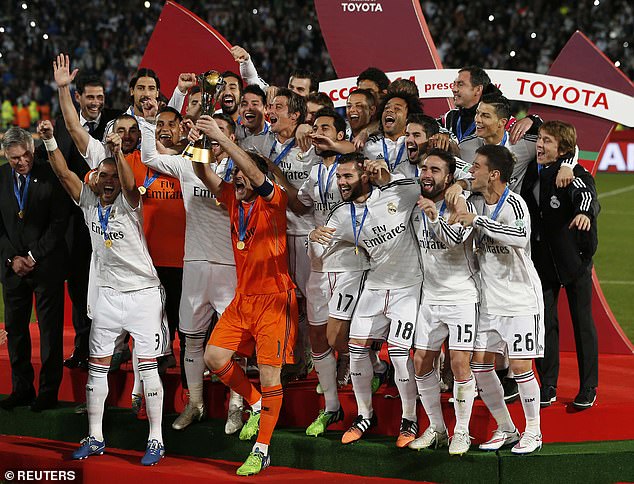 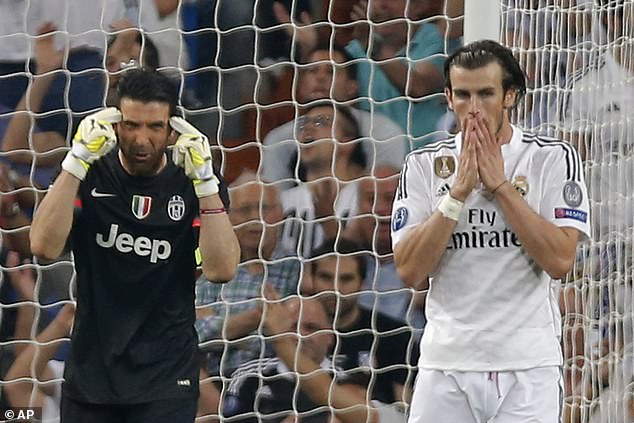 However, there is a twist. Despite all this, Real came up short in LaLiga, finishing two points behind champions Barcelona. They also lost to Juventus in the Champions League semi-finals and Atletico Madrid in the Copa del Rey last-16.

Somehow you can’t imagine City ending up empty-handed if they make it to 22.

If they beat United who are, let’s be honest, specialists in goalless draws against top calibre opposition, they face an easier proposition at home to fast-sinking Southampton the following midweek.

Should they beat the Saints, City will equal the 23 consecutive wins achieved by Bayern Munich just last year.

This is the current record for any team from Europe’s top five leagues – England, France, Germany, Italy and Spain – and remains fresh in the memory. 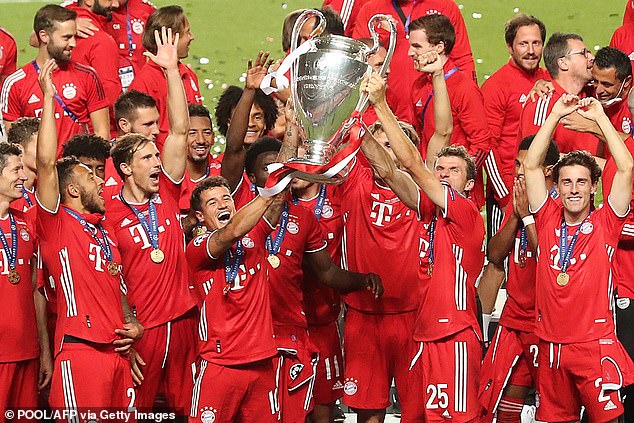 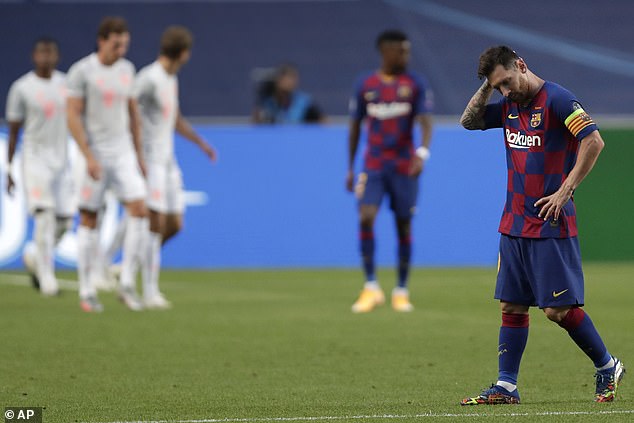 It began on February 16 with a 4-1 Bundesliga win away to Cologne, bridged the Covid-19 suspension and saw Hansi Flick’s team claim a brilliant Treble of Bundesliga, German Cup and Champions League.

They too racked up the goals (78 in all) but the undoubted highlight was that 8-2 demolition of Barcelona in the Champions League quarter-finals, a result that felt like the end of the world for Lionel Messi and Co.

Bayern won the Champions League nine days later with a 1-0 victory over Paris Saint-Germain in Lisbon. 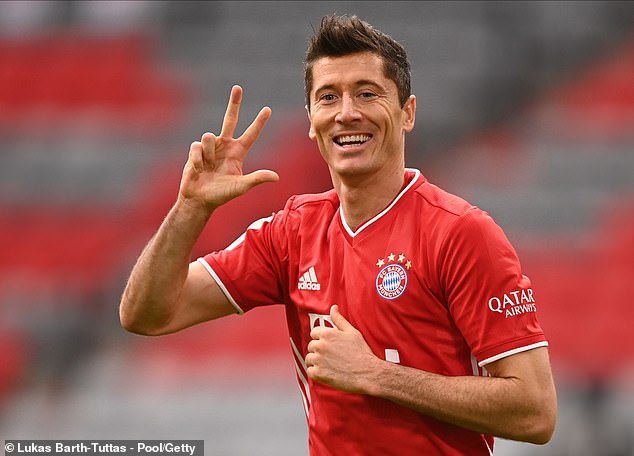 The run lasted just two games of the current season following a very brief pre-season turnaround. They battered Schalke 8-0 in their opening league fixture and then added the UEFA Super Cup to their collection with a 2-1 extra time win over Sevilla.

But they were brought well and truly down to earth in game No 24, beaten 4-1 at Hoffenheim.

It could easily be the case that City and Bayern are on a collision course as the two favourites to win Europe’s top prize this season.

After that, City face a trip to Craven Cottage to take on struggling Fulham and it could very easily by a 24th consecutive win.

In doing so, they would equal the run achieved by the Brazilian club Coritiba between February and May 2011. The club say this was certified by Guinness World Records but others would argue the toss as we’ll see.

Nonetheless, it’s a formidable achievement that started with a 5-0 drubbing if Iraty on February 3 and concluded with a 6-0 win over Palmeiras in the Copa do Brasil on May 5. 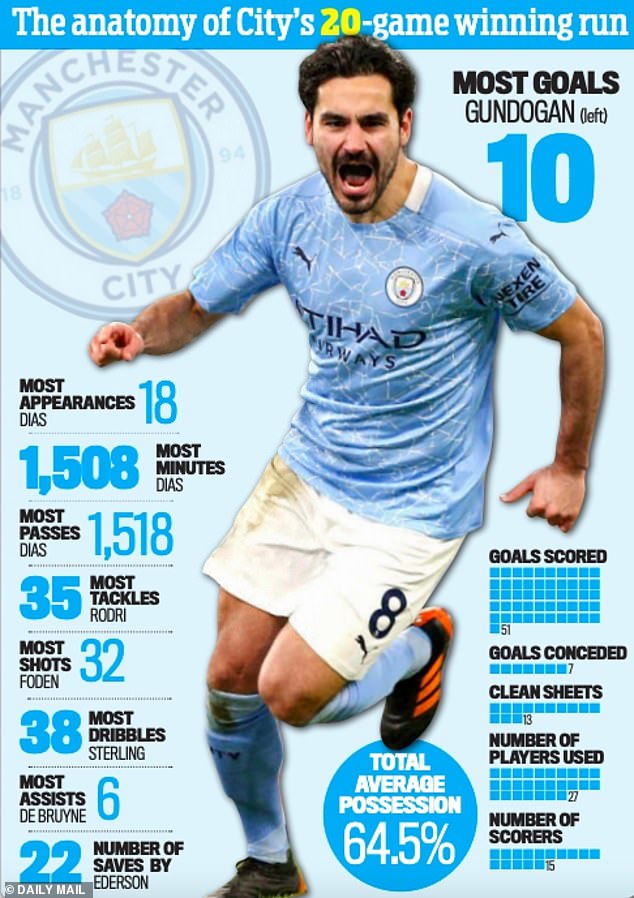 The streak included 17 matches in the Paranense State Championship, unsurprisingly enough to give Coritiba a 35th state title, and seven in the Copa do Brasil.

There was no happy ending in the Cup final, however, as Vasco da Gama defeated them on away goals after a 3-3 aggregate score.

But it certainly represented a rapid turnaround in Coritiba’s fortunes as they were relegated from the Brazilian top-flight in 2009 amid rioting from the fans.

The winning run captured the imagination, though, and crowds surged from just 2,500 per game to over 30,000 as everyone wanted to see history made.

Attention returns to the Champions League next with City the strong favourites to complete the job against Borussia Monchengladbach having won the first leg 2-0.

If they win, they’ll equal the run of 25 consecutive wins achieved by Louis van Gaal’s Ajax team in 1995. 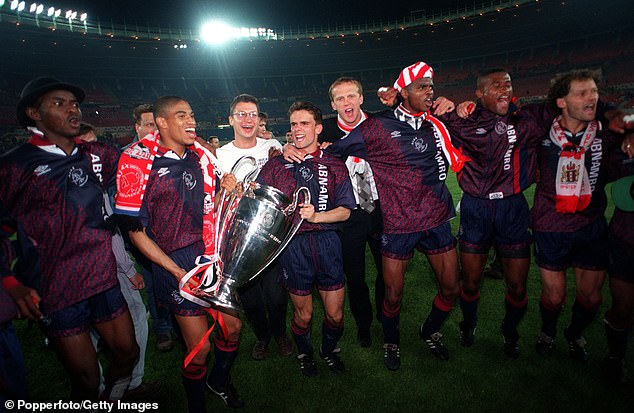 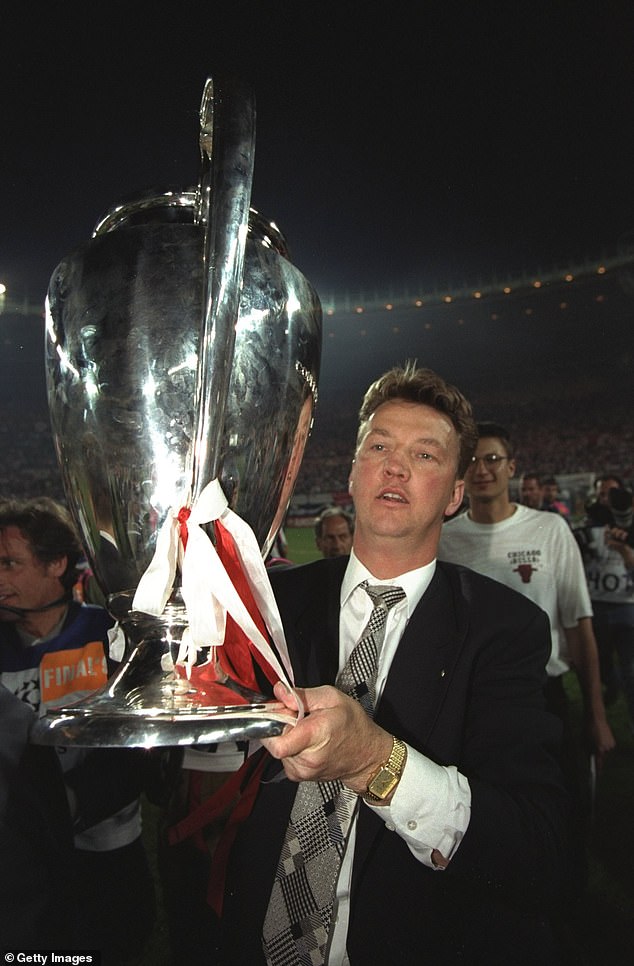 Between 1994 and 1996, they went 52 matches domestically and in Europe undefeated, including 48 games during the calendar year of 1995 and this included a streak of 25 wins.

It enabled them to win the Eredivisie and the Champions League, when they defeated AC Milan 1-0 in the final thanks to Kluivert’s late winner five minutes from time.

However, as we’re about to learn, that Ajax vintage fell one game short of the club record. 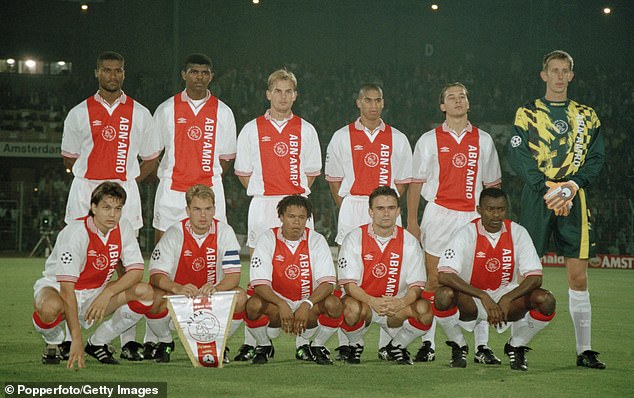 This is the final match on City’s agenda before the March internationals and it promises to be a tricky one – an away FA Cup quarter-final against Everton.

But if the winning streak continues, they will match the incredible 26 consecutive wins achieved by the 1971-72 Ajax ‘Total Football’ pioneers.

This team, including Johan Cruyff, Johan Neeskens and Piet Keizer, won all their games between October 3, 1971 and March 29, 1972. 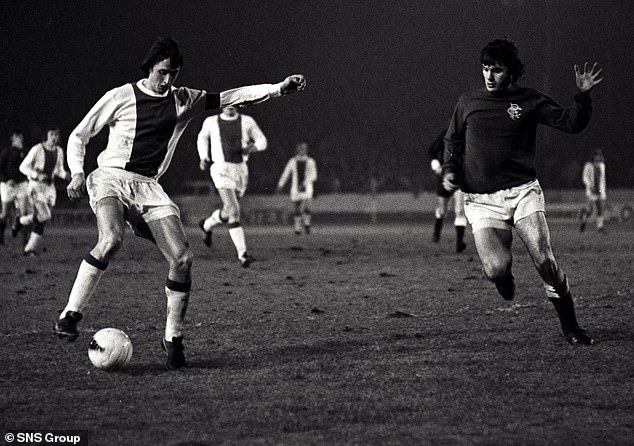 The run comprised 19 Eredivisie fixtures, three in the Dutch Cup and four in the European Cup.

Really, top marks must go to Go Ahead Eagles, who came back from 2-1 down to beat the all-conquering Ajax 3-2 on April 1, inflicting their one and only loss of the season.

Obviously so incensed by this, the Ajax team led by Stefan Kovacs battered MVV Maastricht 8-0 in their next league outing and rounded off the season with a 12-1 win over Vitesse in which Cruyff scored four.

You won’t be surprised to learn this Ajax side swept all before them, winning the league title, the Dutch Cup and the European Cup, where they defeated Inter Milan 2-0 in the final.

Given the influence of ‘Total Football’ on the world, Guardiola’s City really would be in esteemed company if they equalled Ajax’s 26 wins.

But wait, there’s more! If City want to equal the record of any top-flight team they will have to win a 27th straight game at Leicester City on April 3.

That would bring them on a par with Welsh club The New Saints, who have the world record. They ended Ajax’s 44-year hold in December 2016 when they won 2-0 at Cefn Druids in the Welsh Premier League.

Their incredible winning run included 21 league games, four in the two Welsh cup competitions and even two in the Irn-Bru Scottish Challenge Cup, which they were invited into that season. 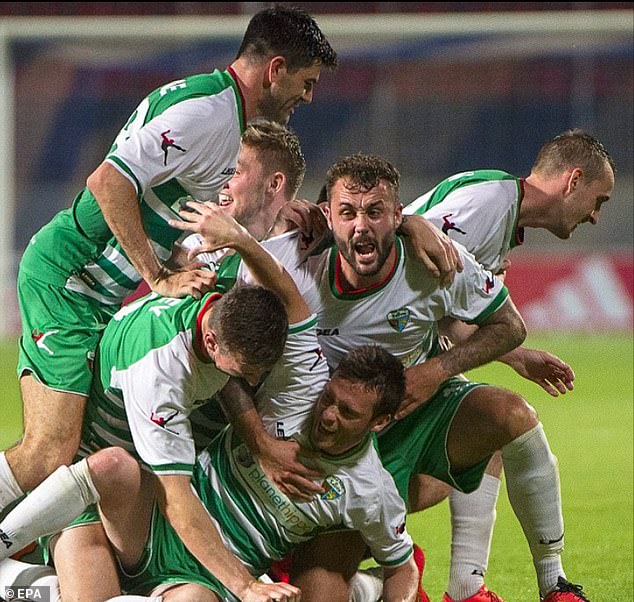 TNS had a firm grip on Welsh football at that time as the only full-time club in the league and they won eight consecutive titles between 2012 and 2019.

The run came to an end when they drew 3-3 with Newtown – having led 3-1 with just nine minutes remaining they conceded an equaliser in injury time.

So history could be made when City host Leeds United on April 10. If their winning run remains intact to a 28th game they will establish a new world record. It would be a quite magnificent achievement.

Ah, but what about East Kilbride, I hear you say… In November 2016, the fifth-tier Scottish club East Kilbride racked up their 30th consecutive victory.

When they won their 27th game in a row, surpassing the Ajax record, the Dutch club’s keeping legend turned marketing director Edwin van der Sar sent them 27 crates of Dutch beer to celebrate with and recorded a video message of congratulations.

However, the 30-game streak isn’t recognised by Guinness because the Scottish Lowland League club aren’t a top-level side.

For the sake of absolute completeness, City may need to reach 31 games.