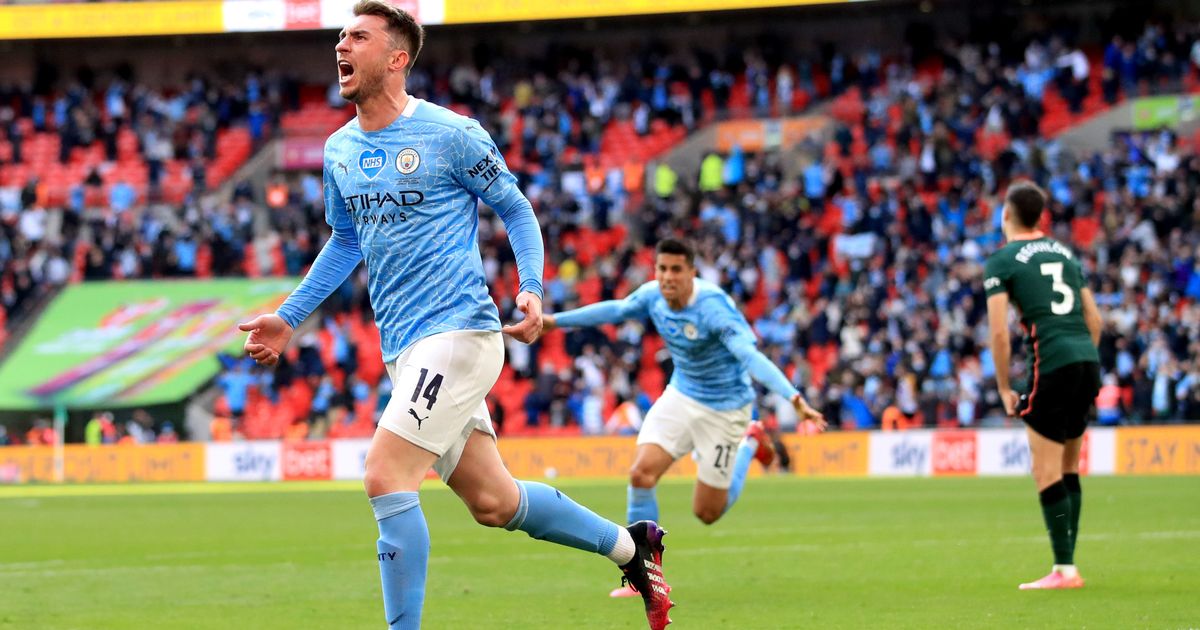 But Pep Guardiola’s men left it late to break Spurs hearts and win their fourth League Cup in a row.

Guardiola is now the first manager EVER to do that – and no team has managed it since Liverpool did in 1984.

It took a late header from unlikely hero Aymeric Laporte to finally crush a Tottenham team that had their moments but never really looked like winning.

But it’s another chance gone for Spurs, who haven’t looked the same since Liverpool beat them in the Champions League final. Harry Redknapp, Andre Villas-Boas, Tim Sherwood, Mauricio Pochettino and Mourinho have all tried and failed to end the trophy jinx, so Mason is not alone.

They had hope when Harry Kane was named in the starting line-up. But he wasn’t fit enough after an ankle injury to make a difference.

And let’s not forget, while this game was all about the return of fans, it was also a clash between two of the Dirty Half Dozen who tried to form a Super League.

This competition would not survive something like that. Maybe City have outgrown it. They haven’t lost in it for 20 matches after all – and their Treble dream lives on.

Did they care? Guardiola and his players certainly did. And so did the 2,000 City fans who celebrated another trophy in style.

But they have bigger fish to fry – and more money to make.

It was all City to begin with as Raheem Sterling headed over, and Eric Dier was forced into a goalline block.

Spurs could barely get out of their own half, with Toby Alderweireld deflecting a Phil Foden shot on to the post.

Sterling fired wide before Riyad Mahrez, who looked like he could have Sergio Reguilon on toast all afternoon, also shot wide.

And City should have scored when De Bruyne, under no pressure at all, lofted an absolutely sensational long ball over the top to Sterling, who couldn’t finish.

Joao Cancelo forced a fingertip save from Lloris with a hell of a shot just before the break as Spurs continued to stand off their opponents.

But whatever Mason said at half seemed to work as Zack Steffen was finally called into action to make an even better save, from Giovani Lo Celso.

Spurs also threatened when Kane went on a storming run through the middle but Pierre-Emile Hojbjerg ruined it all with a terrible pass to Reguilon.

Fernandinho and Gundogan both wasted decent chances too before Lloris again denied Mahrez as City stepped it up a gear.

But it wasn’t until Serge Aurier gave away a free-kick for a soft foul on Sterling in the 82nd minute that City found a breakthrough.

De Bruyne swung in another brilliant cross and this time someone got on the end of it, Laporte climbing above Moussa Sissoko to bury his header.

Mahrez then thought he had scored a second deep into stoppage time but was rightly ruled out for offside.

It didn’t matter anyway because referee Paul Tierney quickly blew his whistle – leaving Spurs players in tears and City celebrating yet another triumph.

The league is already in the bag. Can they go on and win the Champions League now too?