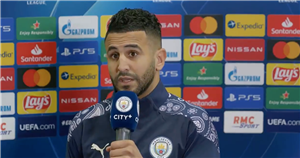 Riyad Mahrez may have scored the vital winner for Manchester City in their first leg with Paris Saint-Germain, but the winger confesses his free kick was a mishit.

Mahrez rifled in from 25 yards in the 71st minute, completing a famous comeback victory for City after Kevin De Bruyne cancelled out Marquinhos' opener.

The Algerian's set piece hands Pep Guardiola's side the aggregate advantage and two away goals to take into next week's second semi-final leg at the Etihad.

However, Mahrez admits his free kick did not travel as he intended, with replays showing the ball found a way through the PSG wall before nestling in the back of the net.

"I wanted to go around the wall to be honest and I missed it, it went between the two players and fortunately it was in," the 30-year-old told City's official website.

"I was so happy, I knew we could win here and to score to make it 2-1 for the team was amazing."

Mahrez also explained why he was confident of scoring against PSG following a prediction by teammate Benjamin Mendy.

Will City finish the job against PSG next week to reach the Champions League final? Have your say in the comments.

He added: "It's all because of Ben. He asked God and God gave me this goal."

Mahrez's strike against the Ligue 1 champions takes his tally for the season to 12 goals in 44 appearances.

He could not hide his excitement over the second leg on Tuesday, but insists City are fully focussed on their trip to Crystal Palace on Saturday in the meantime.

"We are going to enjoy it a little bit even though it’s not over," said the former Leicester ace.

"We have a big second leg but today we will drop a little bit of the pressure, enjoy it, have some food and sleep and then tomorrow we concentrate on Palace."