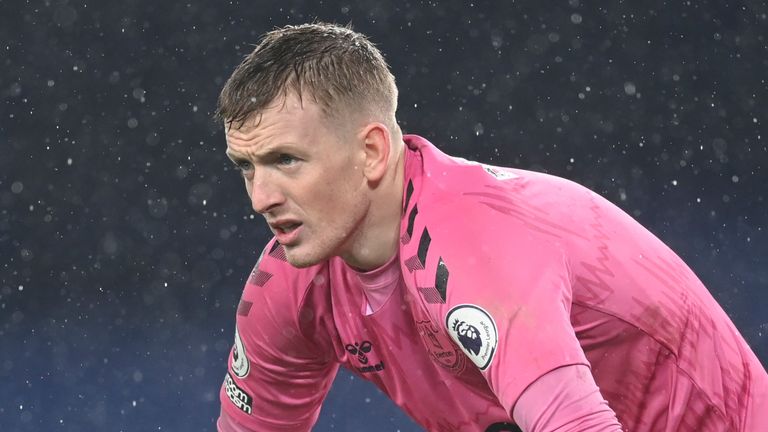 Sander Westerveld believes social media makes it harder for players to move on from mistakes in big games but has backed Everton goalkeeper Jordan Pickford to regain his confidence.

Pickford escaped censure for a poor challenge on Liverpool defender Virgil van Dijk when the sides drew 2-2 at Goodison Park in October – the Dutchman has not played since and could be out for the rest of the season as he continues his rehabilitation from a serious knee injury suffered in the collision.

The England international has struggled for form this season and was recently dropped by Everton boss Carlo Ancelotti in favour of Robin Olsen.

He was reinstated for Wednesday night’s 3-1 defeat to Manchester City and is set to feature in Saturday’s Merseyside derby – live on Sky Sports.

Westerveld – who played for both Liverpool and Everton during his career and was once sent off playing for the Reds in a Merseyside derby – says it was easier to avoid excessive criticism when he was a professional before the internet made high-profile mistakes harder to move on from.

“There’s a lot more pressure on players,” Westerveld told Sky Sports News. “In our day, we could just say ‘we don’t read the papers.’ Now, with social media and the internet, it is everywhere and everybody sees it, everybody knows [about] it.

“They will show it [the incident] a hundred times a day. I think that moment [the injury to Van Dijk] was the downfall of Liverpool, I think that’s where it started to go wrong for Liverpool.

“It’s unfortunate for Pickford. It has a massive impact on Liverpool and puts pressure on him as well with the mistakes he has made.

“It was a big season for him and a lot of pressure but hopefully he gains the confidence again and can play freely.”

Westerveld is convinced Pickford can become one of the best goalkeepers in world football, provided he can “find that switch in his head” to regain his confidence and get him back into the form that saw him play a key role as England advanced to the semi-final stage of the 2018 World Cup.

“It’s the big pressure that goalkeepers have and if you are unlucky enough to make a mistake that costs you points, then the pressure can build up,” added Westerveld.

“Every game you want to win points for the team and if that doesn’t work, you can do things you don’t normally do just to prove yourself.

“It’s a lot of pressure and it’s all about confidence. He just has to find that switch in his head but I think he is playing really well the last few matches.

“He just needs to find that switch to get a lot of confidence and play the way he can. He can be one of the best goalkeepers in the world because he is very complete.

“If he can get a couple of clean sheets and make some match-winning saves, then he is back.” 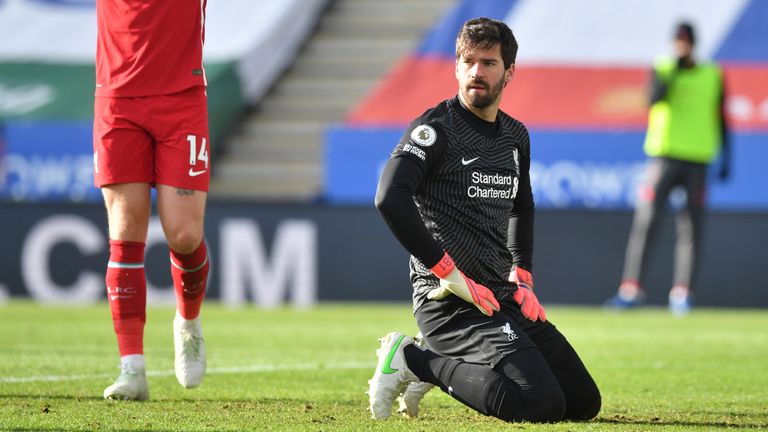 Alisson, Pickford’s opposite number at Liverpool, has also struggled for form of late in the Premier League, with two errors of judgement proving costly in their recent 4-1 defeat at home to Manchester City.

Another crucial mistake from the Brazilian helped Jamie Vardy to slip in and score Leicester’s second goal in a 3-1 win at the King Power Stadium on Saturday before Alisson turned in a more assured performance as they beat RB Leipzig in the Champions League.

Despite his recent aberrations, Westerveld believes Alisson remains one of the leading goalkeepers in the world, playing in what he feels is the toughest position on the pitch.

Westerveld said: “It’s the most important position in the team because it’s the one with the most pressure. The striker can miss all the chances then score a little tap-in at the end and he is still the hero.

“We can stop two penalties and make great saves but make a big mistake at the end and it’s you that’s lost the game.

“Alisson is the best goalkeeper at Liverpool still. He has made some amazing saves and wins a lot of points. Unfortunately, the timing of the mistakes [are unfortunate.]

“Sometimes, if you make big mistake and the team wins, nobody talks about it. But if you lose a big game because of a mistake, then you get criticised.

“He is still one of the best goalkeepers in the world and he will save us a lot in the future.”