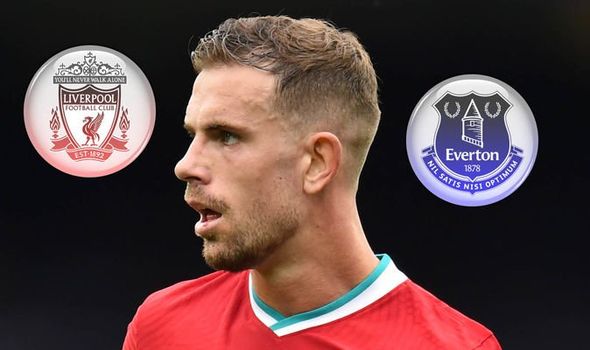 Liverpool star Jordan Henderson has slammed VAR after his side’s 2-2 draw with Everton on Saturday. Jurgen Klopp’s side looked to have snatched a late winner when the England international found the net. But the goal was chalked off for offside, leaving the Reds to settle for a point.

Liverpool took an early lead against Everton through Sadio Mane, with the Senegal international firing home from close range after good work from Andy Robertson.

The Toffees then levelled through Michael Keane, who equalised after Virgil van Dijk had gone off injured following a collision with Jordan Pickford.

Liverpool restored their lead through Mohamed Salah before Dominic Calvert-Lewis struck to earn a point.

In the closing stages, however, the Reds saw a late goal chalked off for the narrowest of offsides. Henderson’s strike beat Pickford but Mane was adjudged to have started the move from an offside position.

And Henderson has claimed VAR ‘bends the lines’ when speaking after the match.

“It must be offside with VAR, it’s what everyone wants,” Henderson told Sky Sports after his injury-time effort was ruled out.

“I think they bend the lines sometimes to make it offside.

“I’m not sure how they do it, I’ve seen it before.

“It’s disappointing we haven’t got the win.

“I thought the performance was very good and we deserved to win the game. I think Everton will be happier with the draw.”

Jurgen Klopp was similarly unhappy and said: “The performance was top.

“It was a top game, a good game from both teams. We were clearly dominant against a side full of confidence. It was probably the best game we’ve played at Goodison since I’ve been at Liverpool.

“But it’s still 2-2 for different reasons.

“Pickford kicks Van Dijk completely. I didn’t see it back but I saw Henderson’s goal from Sadio’s pass… I didn’t see offside. Maybe someone can explain it to me.

“It’s not just a red card on Thiago, it’s a messy foul and now we don’t know what [injury] he has. It looks not good to be honest.”

“Yeah very strange [ending],” he said of the game.

“As you expect in a derby you have tackles flying in and it’s physical. There is always a chance the referee might bring out a yellow or a red [card].

“In the end yeah [I’m happy with the point] but disappointed we didn’t kick on at 1-1.

“We knew we’d go through spells without the ball but I’ve had chances where I’d back myself to put the ball away.

“I thought today would be the day we did it [and ended winless derby run] but it’s on to the next one. I can’t put my finger on why we came out slow, momentum was on our side but sometimes it happens.

“But we’ve made strides and got ourselves back in to the game and we had the chances to win it but we didn’t take them today.

“I’m disappointed we didn’t win the game and I know the fans are too. It’s frustrating but in terms of the bigger picture we got a point, we take it and we keep building.

“We want to keep that unbeaten run going and building towards that bigger picture at the end of the season.”