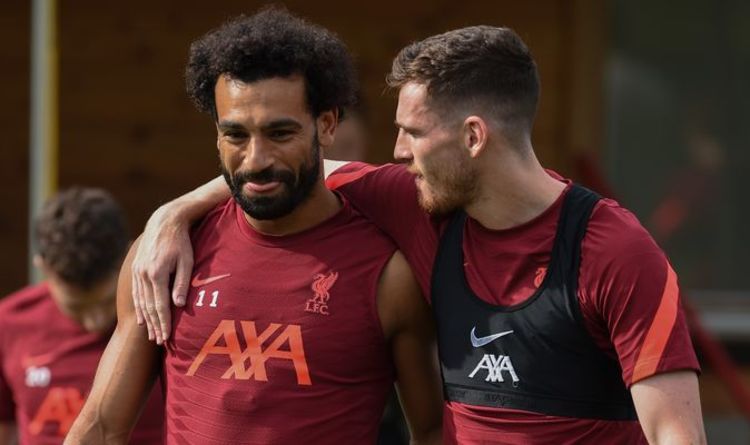 Andy Robertson has instructed Liverpool owners FSG to find a quick-fire solution to Mohamed Salah’s contract dilemma, insisting that fans deserve to see a player of the Egyptian’s calibre at Anfield for as long as possible. Salah is currently tied down until the summer of 2023 but is yet to sign a new deal on Merseyside despite having been locked in talks with the club’s hierarchy for several months.

The 29-year-old has enjoyed a stunning start to the new season, scoring 17 goals in all competitions since the beginning of the campaign.

He was at his brilliant best against Manchester United on Sunday, becoming the first visiting player to score a hat-trick at Old Trafford in a five-goal thrashing of the Red Devils on their own patch.

Salah also produced two incredible moments of magic with a pair of impressive solo goals against Watford and Manchester City earlier in the season.

However, his immediate future still hangs in the balance despite Liverpool’s attempts to keep him at the club on a long-term basis.

The Reds diverted plenty of resources to extending the contracts of key players over the summer, with the likes of Trent Alexander-Arnold, Alisson Becker and Fabinho all penning new deals.

Robertson was also handed fresh terms and is desperate for FSG to follow up by finally striking an agreement with Salah, who the Scot believes is up there with the best players in the world.

“I hope that I can continue to play with him,” Robertson told Sky Sports.

“Let’s leave it up to the club and Mo. I’m sure everyone’s trying to get to an agreement that can work for everyone.

“Hopefully they can reach a solution because if he’s not the world’s best, he’s definitely in the discussion for it and they’re the type of players you want at this club.

“They’re the type of players that the fans at this club deserve. Hopefully that continues and he can stay for a bit longer.”

It remains to be seen whether Salah will eventually commit his long-term future to Liverpool over the coming weeks and months.

The likes of Real Madrid and Barcelona have previously been credited with an interest in his signature, which suggests that he could be tempted by the possibility of a move to Spain.

However, Salah recently claimed that he would be happy to spend the rest of his career with Liverpool but admitted that any final decision over his future lies with the club.

“This does not depend [on] me,” said the former Chelsea and Roma man.

“But if you ask me, I would love to stay until the last day of my football [career]. But I can’t say much about that, [it’s] not in my hands.