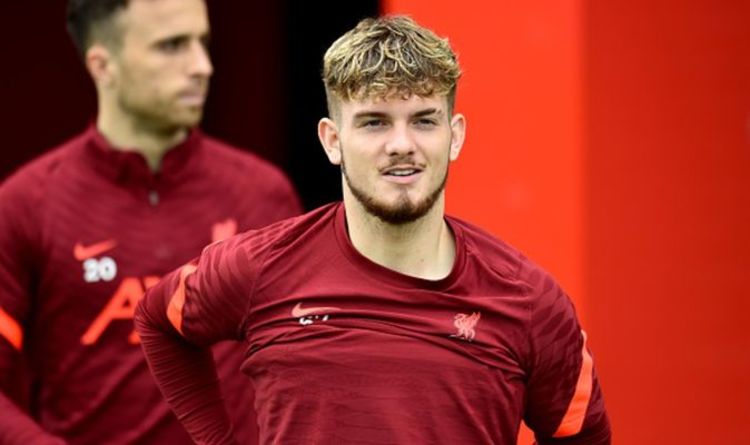 Harvey Elliott handed Jurgen Klopp an injury concern over the international break after the FA confirmed that he had left England U21 duty early due to a knock. However, it does not appear that the teenager will be out for too long.

Liverpool have been handed a boost over the fitness of Harvey Elliott after he withdrew from international duty early.

Teenage midfielder Elliott hard been on duty for England U21’s, and was due to to make his debut at the most senior youth level in their European Championship qualifier against Kosovo on Tuesday night.

However, the FA explained that the midfielder reported for training carrying an injury he sustained in Liverpool’s Premier League draw with Chelsea last month.

That prompted concerns that he may miss Sunday’s trip to Leeds United.

JUST IN: Liverpool’s Alexander-Arnold praised by Lineker in ‘staggering’ claim

However, The Athletic claim that his withdrawal was only a precautionary measure.

And it is hoped that he will be fit enough to be considered for Jurgen Klopp’s match day squad at Elland Road.

Elliot has managed to force his way into Jurgen Klopp’s first team this season, with the German not opting to sign a replacement for the outgoing Georginio Wijnaldum.

Having spent last season on loan in her Championship with Blackburn, he come on off the bench in the opening day Premier League victory at Norwich.

Elliott followed that up with a scintillating performance as he was handed a start in the win over Burnley a week later.

And he remained in the starting XI for Liverpool’s 1-1 draw with Chelsea last time out before the international break.

The 18-year-old played eight times for the England under-17s side, and was in line for his first appearance for the Young Lions as they prepare to get their European Championship qualifying campaign underway.

They were supposed to play Romania on Friday night, but that game was postponed after two positive COVID-19 tests were reported within the England set-up.

Elliott will now be monitored by the club’s medical staff before the Reds look to maintain their unbeaten start to the season at Elland Road.