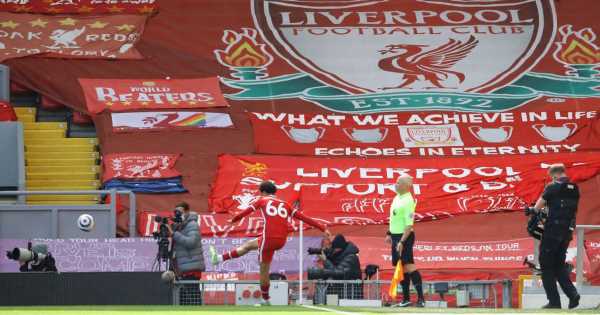 The Reds were forced into an embarrassing climbdown earlier this week following backlash to their proposed involvement in the European Super League.

Following the high-profile debacle, Thompson says supporters now need to have a greater say in how their clubs are run.

"What you would like to see is fans on the board," he said.

"Somebody at least to share ideas and put them forward. If just one person had asked the Spirit of Shankly supporters group, it would have been a non starter straight away. It's the same with the other clubs. They understand the history and heritage, which a lot of owners don't.

"Henry was the first one to come out, even though Liverpool were one of the last to pull out of the Super League – obviously Chelsea and City did first.

"Will it be enough? Not for now. I think they'll have to earn the trust again of supporters. I thought it was a wonderful apology, but still more has to be done."

However, there are now growing calls from some quarters for the 71-year-old to sell up.

With emotions still running high, Thompson has called for calm.

"We have to work together because Liverpool's owners, believe it or not, have been very good," added the former defender, who won three European cups and seven league titles with Liverpool.

"Since they came in we've played two Champions League finals back-to-back, winning one. We've also won the Premier League after 30 years and seen some great players. We've been run in a proper manner.

"I've seen and witnessed a lot in football – but this last week has been astonishing.

"Wealthy and intelligent men have made a right pigs ear out of this.

"Like every Liverpool fan I'd have rather they'd have gone: 'no we don't want any part of it'.

"But I think the English teams – and not just Liverpool – didn't want to get left behind."

Listen to Paddy Power podcast 'From The Horse’s Mouth': podfollow.com/horsesmouth