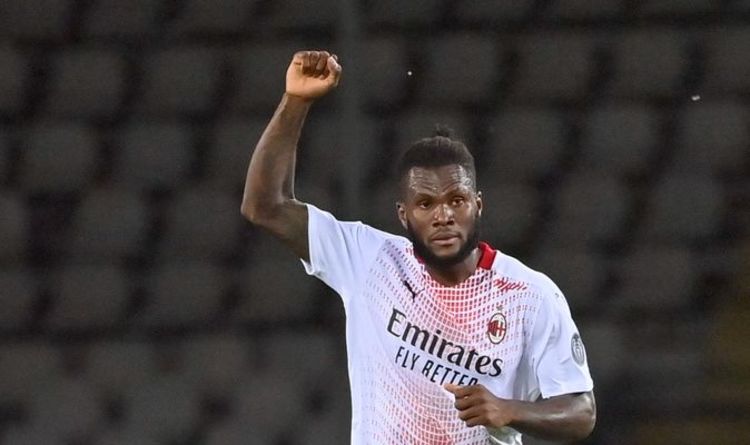 Liverpool have been linked with a move for AC Milan midfielder Franck Kessie as his contract talks continue to stall. The Ivory Coast international scored 13 goals and registered six assists for Milan last season, helping the team to a second-placed finish in Serie A.

His impressive displays have led to some of Europe’s top sides weighing up a move for his services as clubs look to take advantage of his contract situation.

Kessie’s current deal is set to expire next summer and he is yet to commit to Milan over a new deal, meaning the Serie A giants must decide to cash in during the current transfer window or be prepared to run the risk of losing him for free.

According to a report from Italian outlet Gazzetta Dello Sport, Kessie’s agent is due to meet with the Milan hierarchy in the coming week as both parties look to reach a compromise.

JUST IN: Liverpool expecting offers for four stars as Klopp set for U-turn

The 24-year-old is currently representing Ivory Coast at the Tokyo Olympics and it’s believed that Milan will attempt to reach an agreement once he has returned from Japan.

Liverpool are still searching for a Gini Wijnaldum replacement, having lost the Dutchman to PSG this summer on a free transfer.

Jurgen Klopp’s side have made only one signing so far in the window, recruiting RB Leipzig defender Ibrahima Konate for £36million.

It has been reported that the Reds will have to focus on outgoings before they are able to begin adding to the group, and progress has already been made in this department.

Liverpool recently shifted midfielder Marko Grujic and striker Taiwo Awoniyi out of the club on a permanent basis for a combined total of £17m.

The duo only made 16 first-team appearances for the Reds between them and were purchased for a total of £5.5m.

Further departures are now expected to take place in the coming weeks as Liverpool continue their summer clear-out, with Harry Wilson believed to be one of the first to agree terms with a new club.

The Welsh winger has spent the last four seasons out on loan but is now looking to secure a permanent move elsewhere as he eyes regular first-team football.

Divock Origi and Xherdan Shaqiri are two others who could be on their way out of Anfield, having found opportunities limited at Liverpool.