Goalkeeper Alisson Becker scored in the fifth minute of stoppage-time as Liverpool snatched a 2-1 victory at the death against relegated West Bromwich Albion at The Hawthorns.

Alisson headed home from a corner to secure what could be a precious three points for Liverpool in their bid to qualify for the Champions League next season. 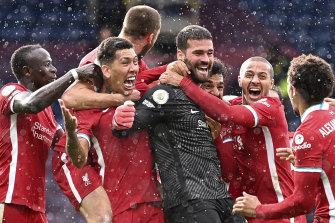 “I just tried to run into a good place and be there to try and help my players, to bring a defender, but no one followed me and I am lucky and blessed, sometimes things you can’t explain,” Alisson said.

“I’m too emotional, this last month for everything that has happened with me and my family, but football is my life, I played since I can remember with my father. I hope he was here to see it, I’m sure he is celebrating with God at his side.”

Tottenham Hotspur’s England striker Harry Kane scored his 22nd Premier League goal of the season to help his side to a 2-0 home win over Wolverhampton Wanderers on Sunday, boosting their bid to secure European football for next season.

After Kane’s late first-half strike, Pierre-Emile Hojbjerg grabbed Spurs’ second just past the hour to seal a victory which lifted Ryan Mason’s team to sixth in the standings. 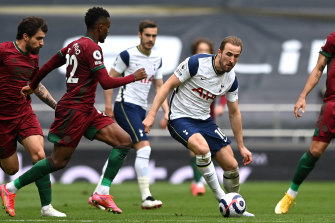 The performance was a vast improvement from Tottenham’s defeat at Leeds United last week, including a promising afternoon from Dele Alli who showcased his attacking skills and tricks as well as getting stuck in with defensive duties.

“We are not happy with where we are, we should be higher and we only have ourselves to blame,” Alli, who fell out of favour under previous manager Jose Mourinho, told Sky Sports. “We are showing now what we can do but it is a bit too late. We just have to keep working hard and take it into the next season as well.”

Spurs are in sixth place with 59 points, five adrift of London rivals Chelsea and four points behind Liverpool. Wolves remain in 12th spot.

Although Spurs would need a sensational set of results to finish in the top four and qualify for the Champions League, sixth place should be enough to make the Europa League next season following Leicester City’s FA Cup win on Saturday.

It was Everton’s ninth home league defeat this season – equalling a club record – and left them in eighth place with two games of the season remaining.

While their away form has been impressive, Everton have picked up only six points at home in 2021, a tally better only than relegated Fulham’s four.

“We played so bad. The only result that could be possible is a defeat. As we usually did at home most of the time, we lost,” Ancelotti said. “I have to take responsibly for this but I hope the players do too.

“We have two games to the end. We lost a great opportunity to have the chance to fight for Europe.”

Earlier, Crystal Palace struck twice in the second half through forward Wilfried Zaha and left-back Tyrick Mitchell to secure a 3-2 win over Aston Villa in an entertaining match at Selhurst Park.