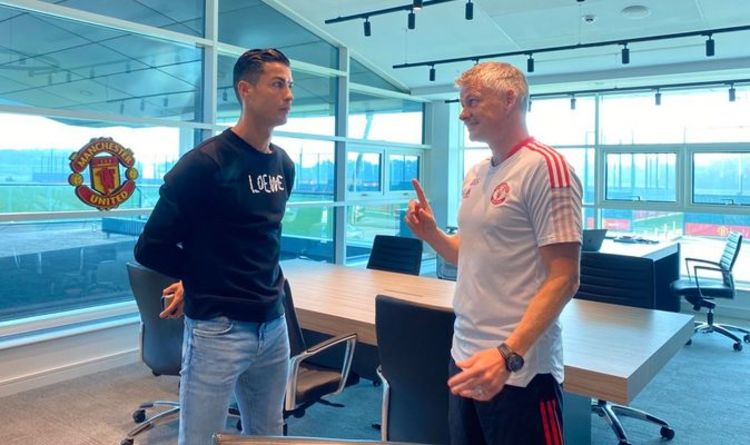 Former Liverpool defender Jose Enrique could not resist the opportunity to mock his former enemy Manchester United amid Cristiano Ronaldo’s much-hyped return to the club. Ronaldo could be set to make his second debut for the Red Devils on Saturday when Ole Gunnar Solskjaer’s side take on Newcastle at Old Trafford.

The Portuguese superstar returned to training at Carrington this week, and was pictured with his new teammates along with his ex-colleague turned boss Solskjaer.

Fans were delighted to see the club release a picture of the two men in deep conversation.

And they will be hoping Ronaldo is the missing piece of the jigsaw needed to fire their team to glory this season following four years without a major trophy.

Supporters of United’s rivals, however, are not so keen to see the five-time Ballon d’Or winner back on these shores, and there has been plenty of creativity on social media surrounding the move.

On Thursday Enrique, who represented Liverpool for five years between 2011-2016, shared the previously mentioned picture of Ronaldo and Solskjaer to Instagram.

Alongside it was included the caption: “Ronaldo: I look forward to winning trophies with you.

And Enrique also posted a number of laughing emojis, much to the delight of Liverpool fans.

It remains to be seen whether or not Ronaldo is indeed able to win silverware in his second spell at Old Trafford.

But speaking in an interview with Wes Brown posted on United’s official website, he certainly appeared confident he would do just that.

“This is why I am here,” he replied to a question about his desire for success.

“I am not here for a vacation. As I told you, before was good, winning important things and I wore the shirt before many years ago, but I am here to win again.

“I am ready and I think I will be a huge thing in the next three or four years.”

After the game against Newcastle, United get their Champions League group stage campaign up and running with a trip to Young Boys on Tuesday.

And they then go to West Ham on September 19 before facing the Hammers again just three days later in the Carabao Cup.