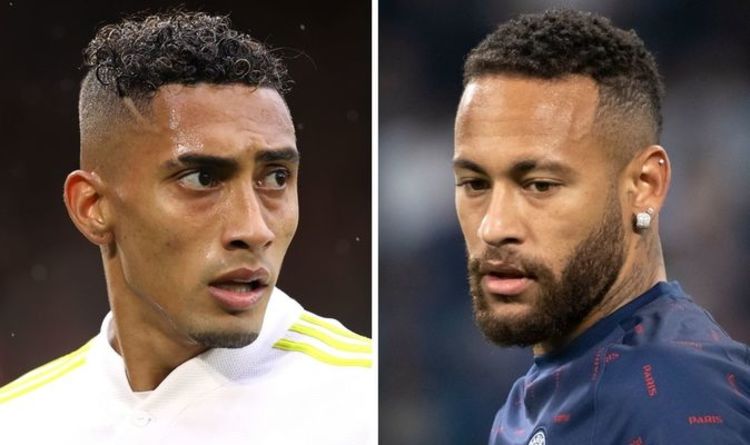 Paris Saint-Germain forward Neymar has urged the club to go head-to-head with Liverpool for the signature of Leeds United winger Raphinha, according to reports. The Reds have long been credited with a strong interest in the latter, who has emerged as one of the Yorkshire club’s best players during their stint in the Premier League.

Raphinha has turned plenty of heads since the beginning of the current campaign, scoring three league goals to spearhead Leeds’ attacking charge.

He managed an eight-goal haul along with 11 assists in all competitions last season, earning a place in Brazil’s international setup in the process.

The 24-year-old made his debut for the Selecao earlier this month and was involved in all three goals as they fought back to secure a much-needed win over Venezuela in their World Cup qualifier.

Brazil talisman Neymar is said to be a huge admirer of Raphinha and had the chance to witness his magic first-hand under the lights in Caracas.

The Leeds man’s showing appears to have left a lasting impression on his international team-mate ahead of the January transfer window.

Neymar has waxed lyrical over Raphinha to those in command at PSG, convincing the French giants to enter the race for his services, according to TEAMtalk.

The report claims that PSG are on the lookout for attacking reinforcements ahead of next season, with Kylian Mbappe widely expected to join Real Madrid on a free transfer.

The club’s sporting director Leonardo is said to be a long-term admirer of Raphinha, having watched him play against PSG for Rennes prior to joining Leeds in a £17million move last summer.

However, Neymar’s intervention has reportedly led the Parisian club to put the Leeds forward near the top of their shortlist.

It remains to be seen whether PSG will be able to poach Raphinha ahead of Liverpool, who registered an interest in the player during pre-season.

His agent Deco previously admitted that Liverpool expressed a desire to bring the winger to Anfield, but Leeds flatly refused to let him join the six-time European champions after just one season at Elland Road.

“Raphinha has become an important player in the Premier League, the club knows he has grown and things will happen naturally,” Deco told Globo Esporte earlier this month.

“He is young, he has many challenges ahead. There are certainly several clubs that like him, and Liverpool do like him.

“There were enquiries [in the summer], but nothing official. Leeds wanted to keep him for another season.”

Meanwhile, former Brazil forward Rivaldo recently urged Raphinha to push for the opportunity to join Liverpool, insisting that such a move would do wonders for his own personal development.

“If he were to make the move, he may not be a regular starter, but I’m sure it would be a big step in his career,” the former Barcelona forward told Betfair.

“It would allow him to compete for titles and play in the Champions League which could be crucial for more call ups into the Brazilian national team.

“He has the quality to play for a bigger club. He is playing excellent football and a player always wants more and stronger challenges, so he would benefit from a transfer.”