Leicester City players have arrived at the King Power Stadium to pay their respects to Vichai Srivaddhanaprabha, the billionaire owner and chairman who died in a tragic helicopter crash on Saturday night.

The 60-year-old perished alongside two other passengers and two pilots when his own helicopter spun out of control shortly after taking off from the centre circle following Leicester’s draw with West Ham.

Foxes players were pictured arriving at the King Power Stadium on Monday morning, where they are expected to pay their respects alongside Srivaddhanaprabha’s family and close friends in a private prayer service. 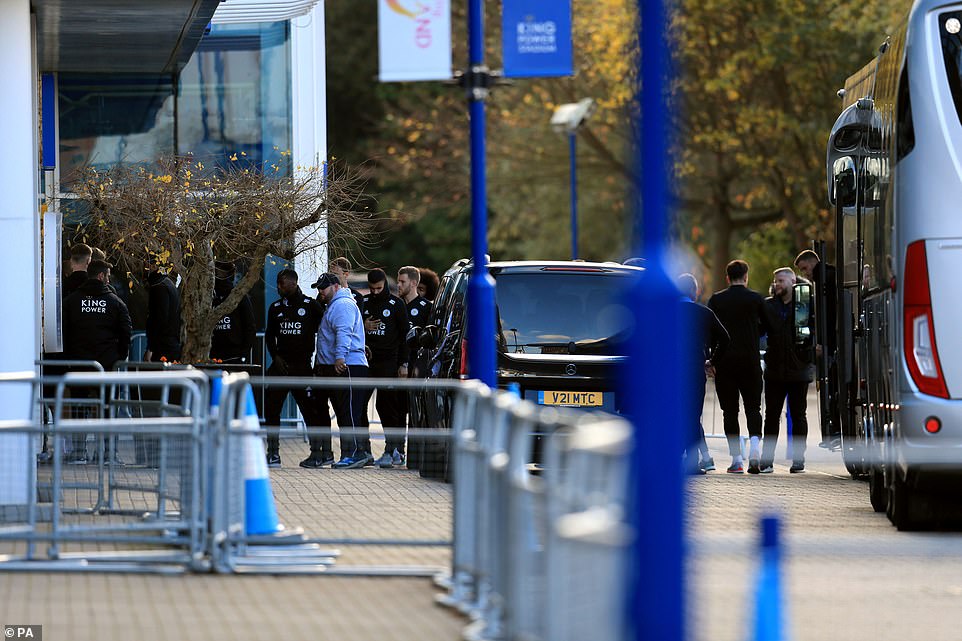 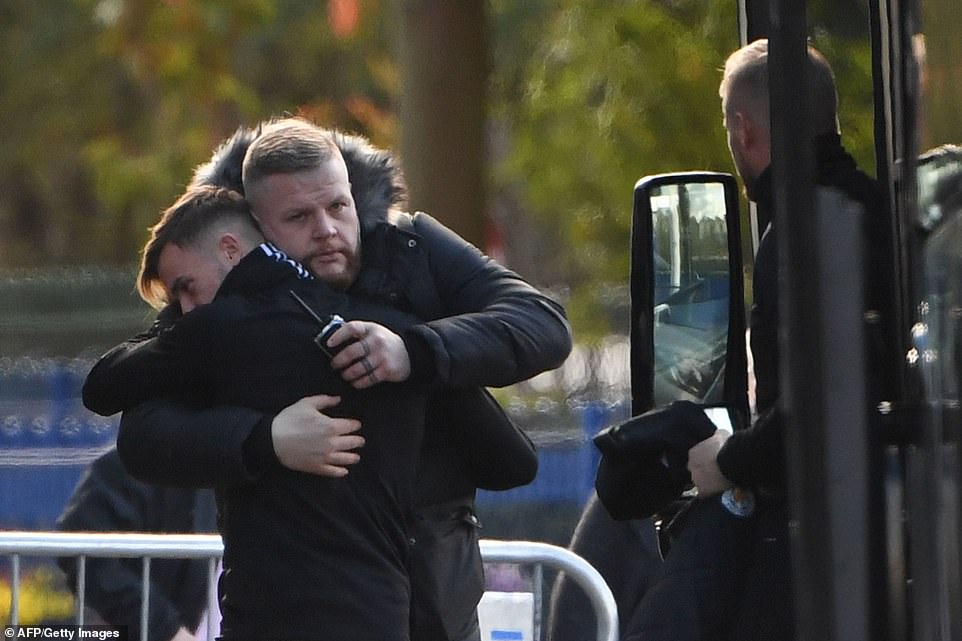 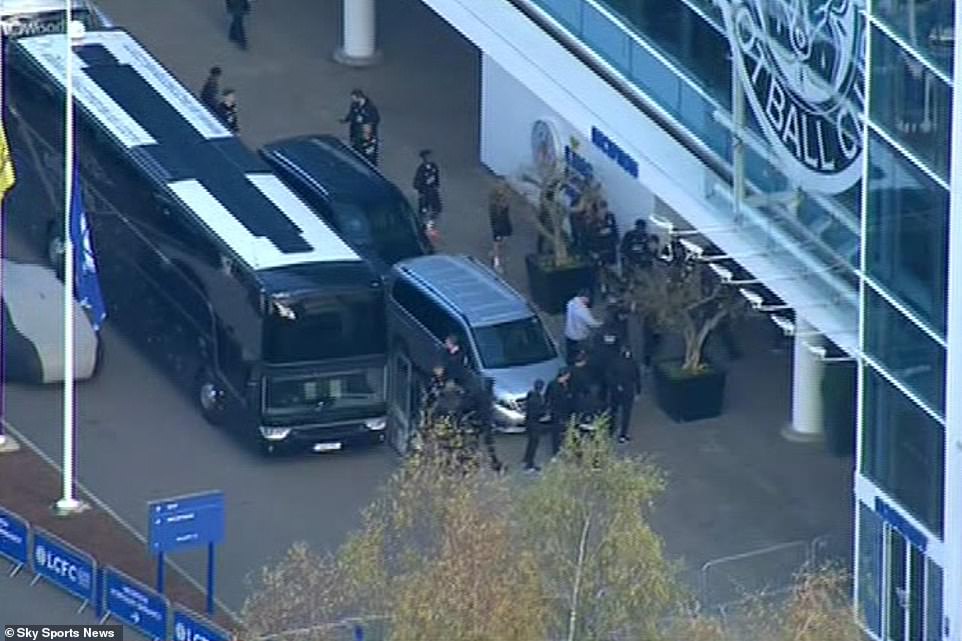 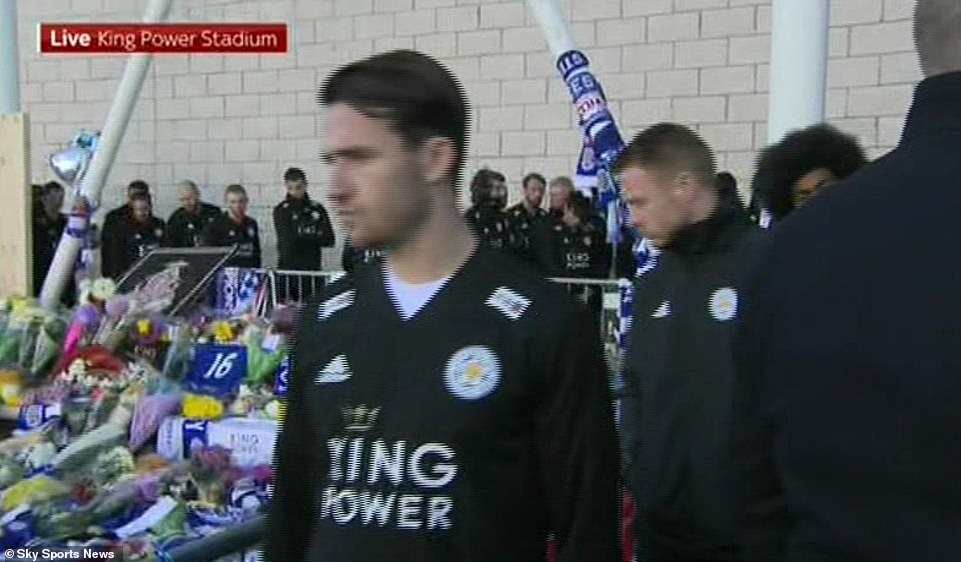 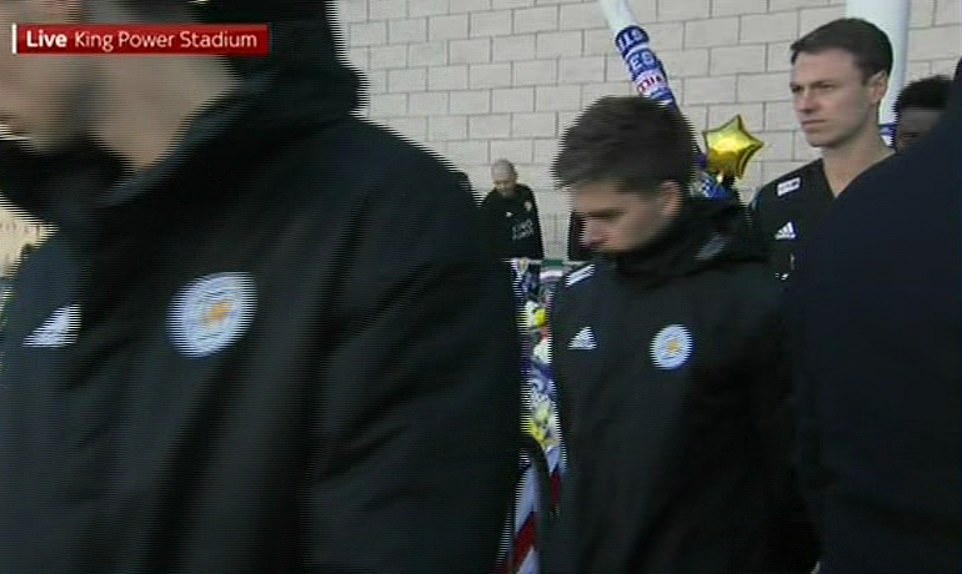 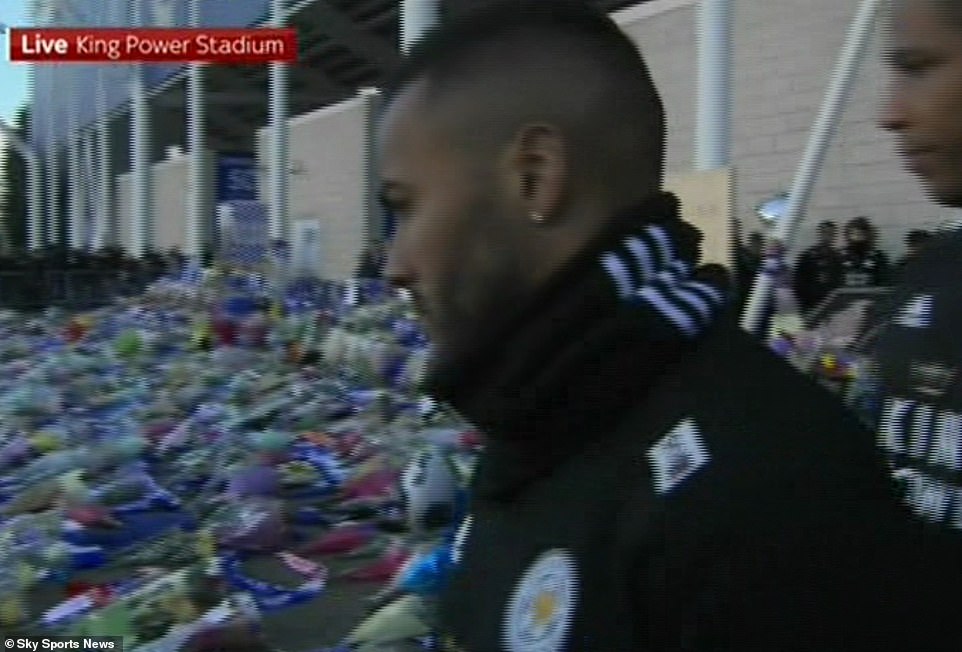 Many of the Leicester players were still inside the stadium when Srivaddhanaprabha’s helicopter came down in a car park close by. Goalkeeper Kasper Schmeichel was seen in tears outside of the ground after the huge explosion rang around the ground.

Schmeichel had just helped his Leicester City team to a 1-1 draw against West Ham in which Wilfred Ndidi scored a late equaliser. The players were due for a light training session on Sunday, but were told to stay at home with many traumatised by the tragedy.

They were also due to play at the King Power Stadium again on Tuesday in a Carabao Cup round-of-16 tie against Southampton, but the English Football League and the Saints have both agreed to postpone it in light of the crash.

Thousands of supporters have visited the club’s stadium throughout Sunday and Monday to pay respects to their much-loved chairman with many laying flowers, Leicester City shirts and scarves to create a vast shrine.

Srivaddhanaprabha was a hugely popular figure at the club as he oversaw their rise from the Championship, the second-tier of English football, to become unlikely Premier League champions in 2016, beating 5,000-1 odds. 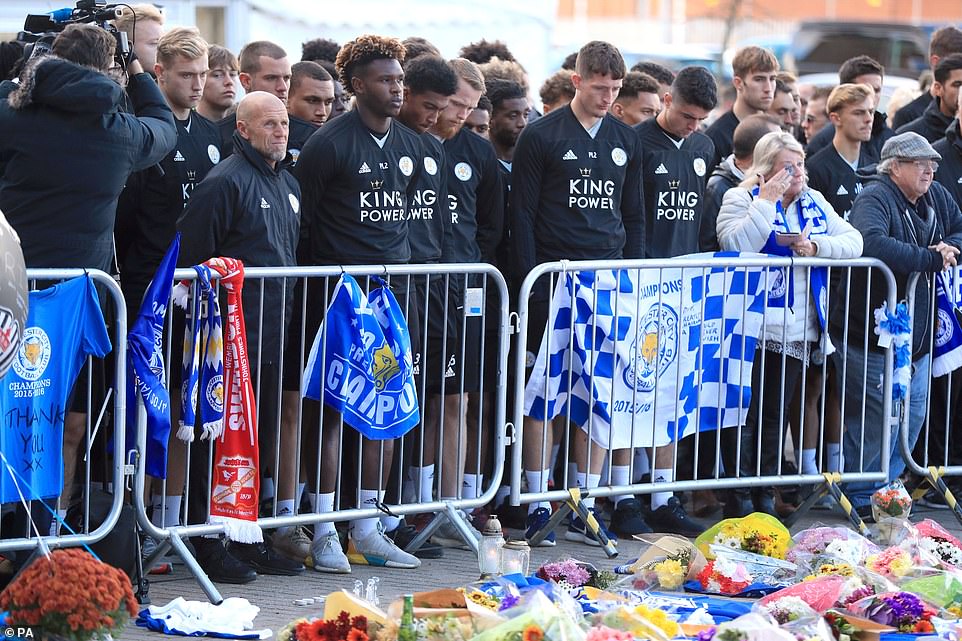 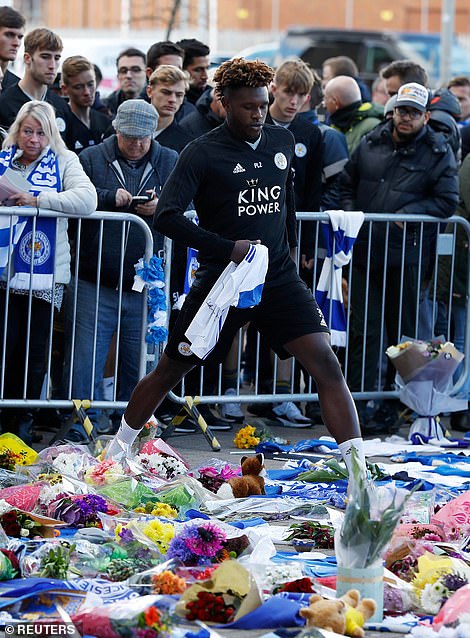 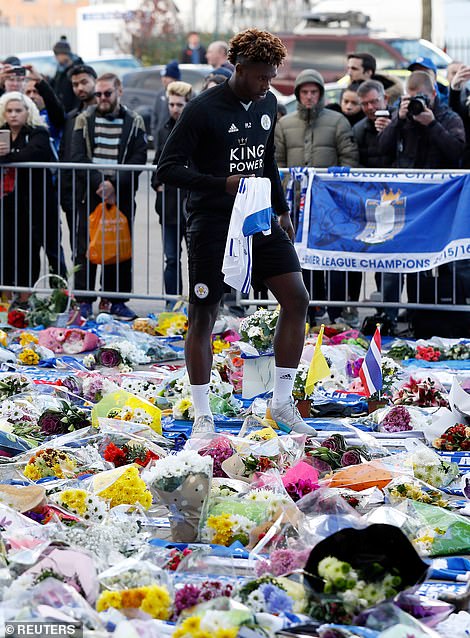 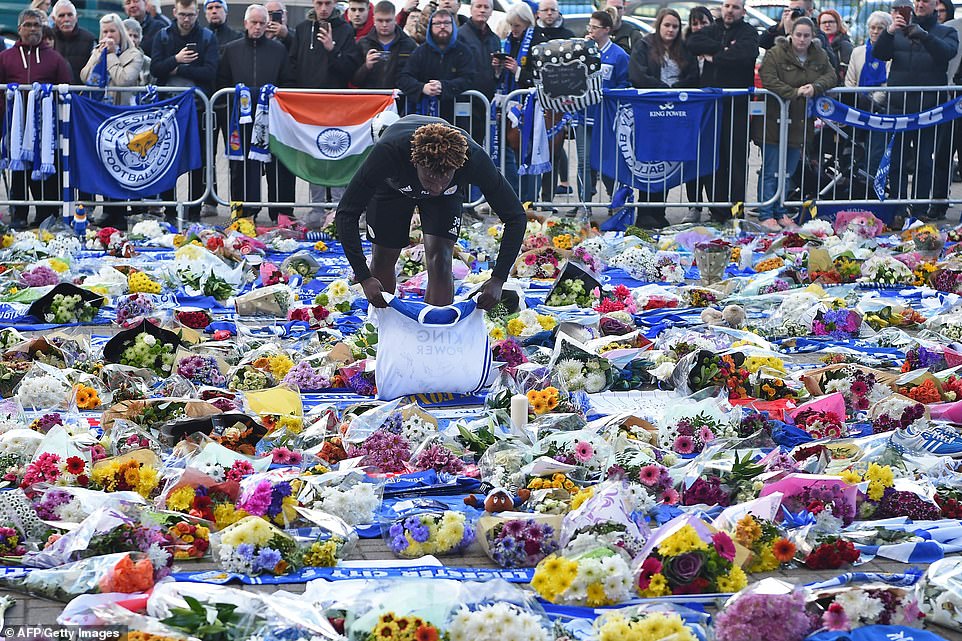 The billionaire perished with his assistant Kaveporn Punpare and Nursara Suknamai, a Thai beauty queen turned PA, when the aircraft spiralled into a ‘dead man’s curve’ when its tail rotor apparently failed.

The AW169 AgustaWestland helicopter’s hero pilot Eric Swaffer and his girlfriend co-pilot Izabela Lechowicz also died – but potentially saved hundreds of lives by crashing away from the crowds of fans still in the surrounding area.

On Monday, the Air Accident Investigation Branch [AAIB] confirmed they have found the aircraft’s black box recorder and will be forensically examining the wreckage and crash site before moving it to Farnborough, Hampshire, by Friday.

Srivaddhanaprabha’s wife Aimon and his heir Aiyawatt, who regularly flew with him, were also among the mourners who travelled to the Midlands from Thailand to lay a wreath outside the King Power Stadium.

Mother and son were in tears as they stood surrounded by the flowers, football shirts and scarves left by thousands of supporters at a growing shrine for the duty free mogul who died 48 hours ago.

Both cried as they laid a giant wreath before praying in front of a portrait of their perished father before the Leicester City first team arrived. It is believed there will be a private prayer service with family and friends inside the stadium. 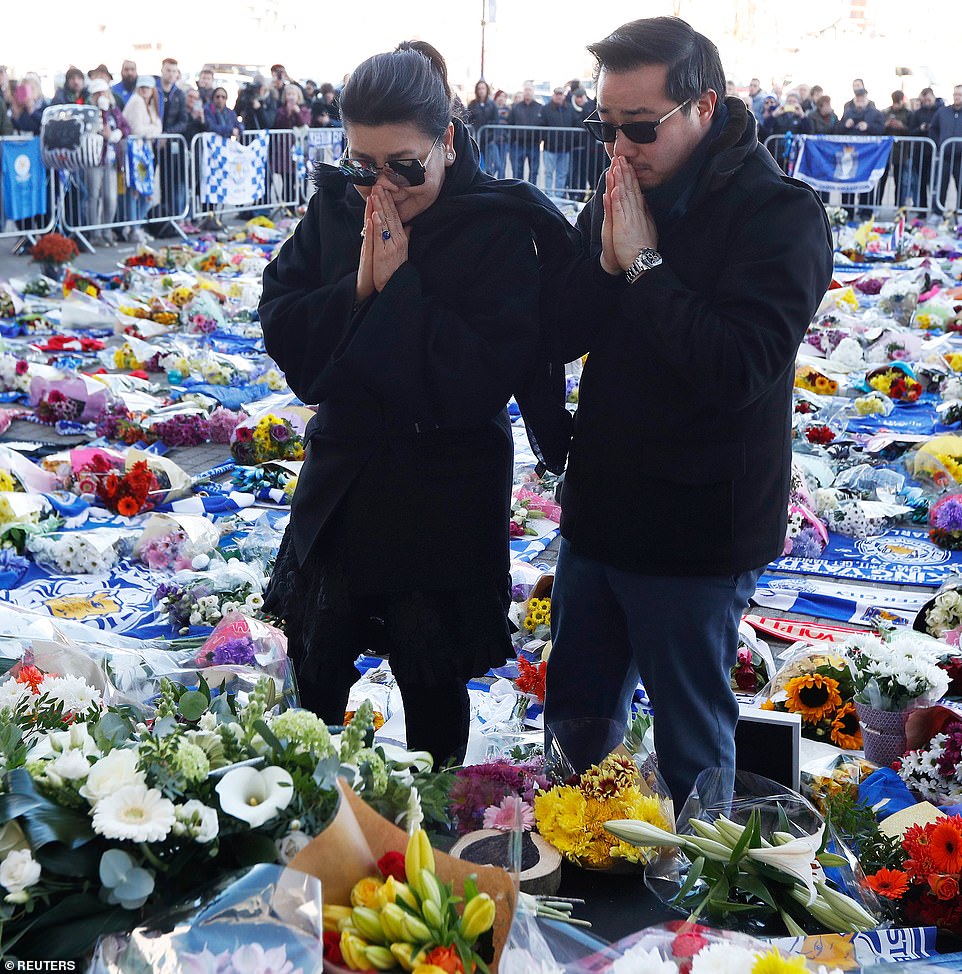 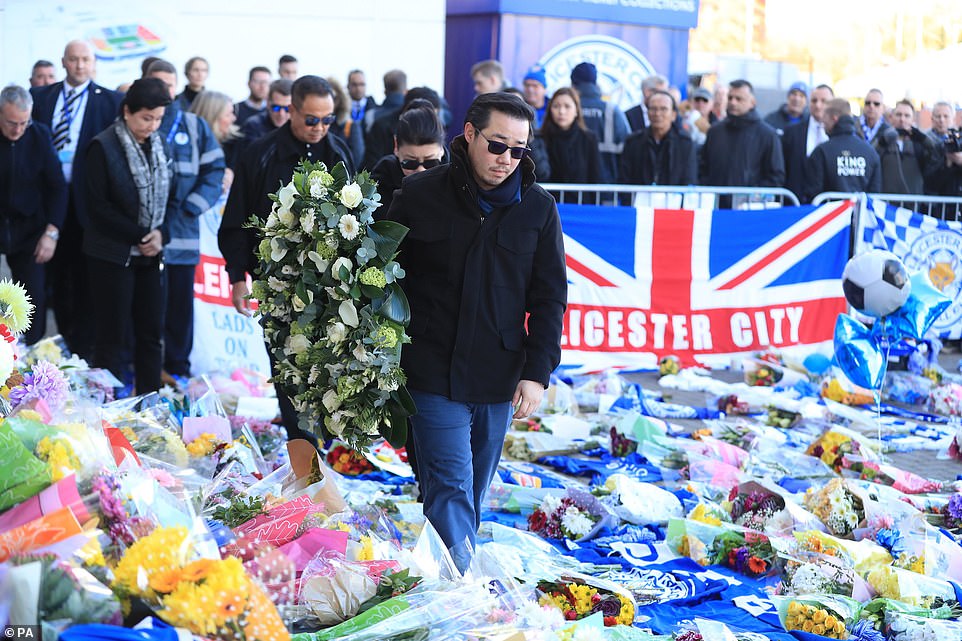 Aiyawatt laid a wreath and prayed for his father, who lost his life after watching his beloved Leicester play on Saturday night 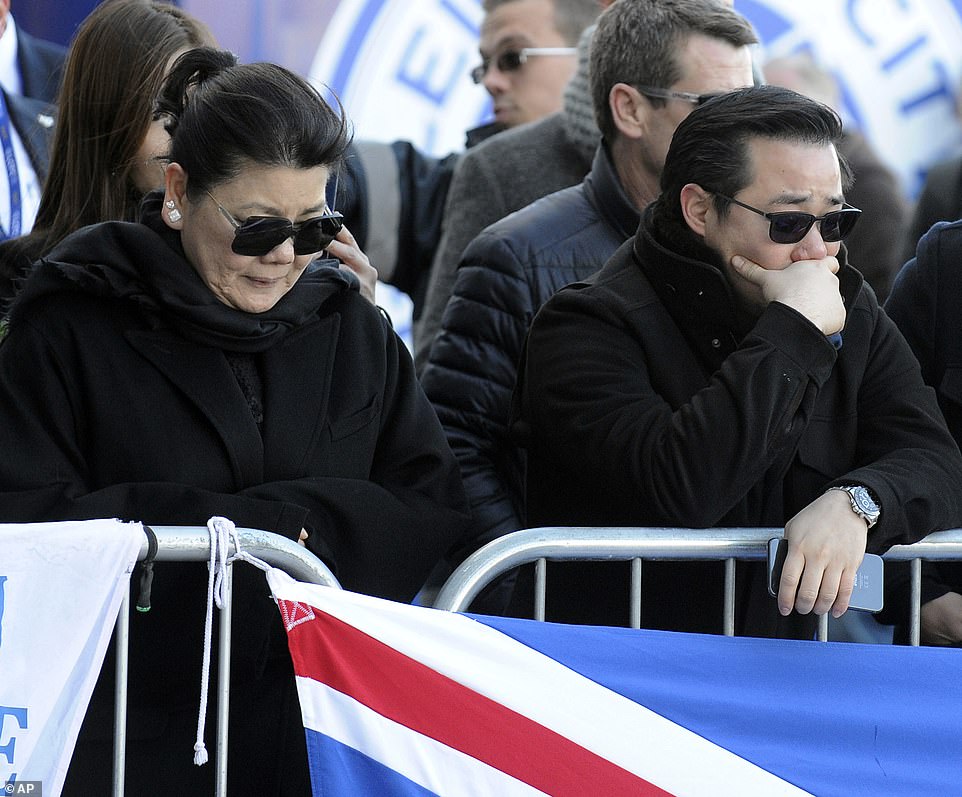 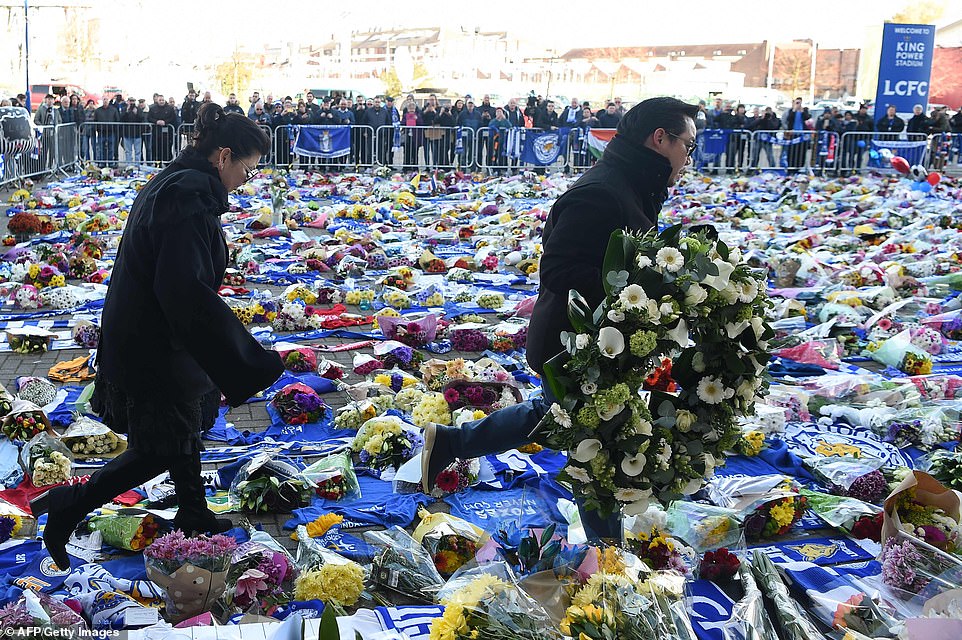 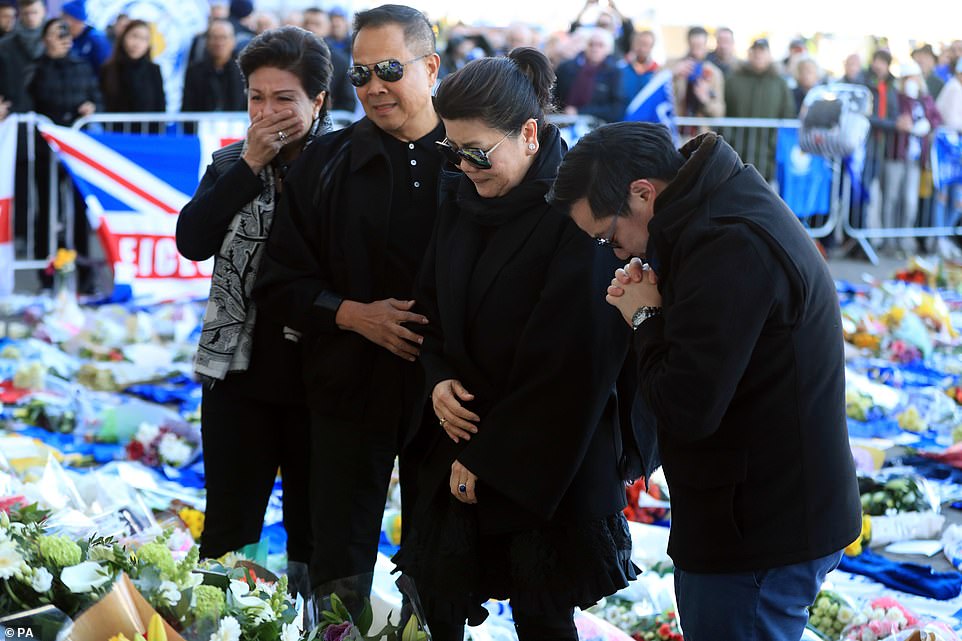 Mother and son were not joined by Mr Srivaddhanaprabha’s other son and two daughters. But Somyot Poompanmoung – President of the Thai FA, and his wife Potjaman came to pay tribute 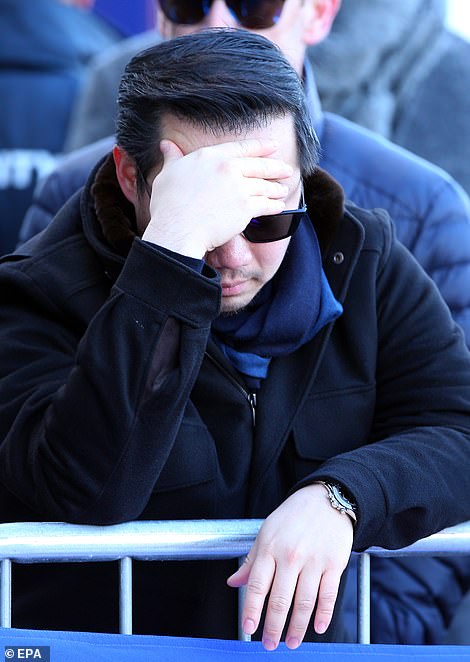 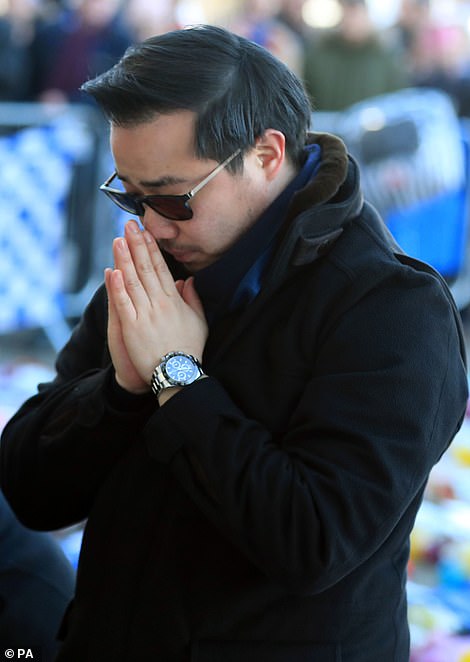 The praying Mr Srivaddhanaprabha, who is known as ‘Top’, is expected to take over from his father as chairman of the football club

Schmeichel, the Leicester City goalkeeper who was seen in tears outside the stadium in the midst of the tragedy on Saturday night, wrote a deeply moving open letter in which he praised Srivaddhanaprabha’s passion, generosity, and hard work.

‘I am so totally devastated and heartbroken,’ Schmeichel posted. ‘I cannot believe what I saw. It just doesn’t seem real!

‘It is difficult to put into words how much you have meant to this football club and to the city of Leicester. You cared so deeply for the entire community. Your endless contribution to Leicester’s hospitals and charities will never be forgotten.

‘Never have I ever come across a man like you. You touched everyone. You changed football. Forever! You gave hope to everyone that the impossible was possible.

‘When you signed me back in 2011 you said to me we would be in the Champions League within six years and we would do great things. You inspired me and I believed in you. You literally made my dreams come true.

‘It breaks my heart to know I will never see you in the dressing room when I came in early from my warm-up and have a chat about everything and nothing. That you won’t be there having fun and laughing with the boys and seeing your infectious smile and enthusiasm that rubbed off on everyone you came into contact with.

‘We now have a responsibility as a club, as players, and fans to honour you. From knowing you we do this by being the family you created. By sticking together and supporting those closest to you through this horrendous time.’

It is with the deepest regret and a collective broken heart that we confirm our chairman, Vichai Srivaddhanaprabha, was among those to have tragically lost their lives on Saturday evening when a helicopter carrying him and four other people crashed outside King Power Stadium. None of the five people on-board survived.

The primary thoughts of everyone at the club are with the Srivaddhanaprabha family and the families of all those on-board at this time of unspeakable loss.

In Khun Vichai, the world has lost a great man. A man of kindness, of generosity and a man whose life was defined by the love he devoted to his family and those he so successfully led. Leicester City was a family under his leadership. It is as a family that we will grieve his passing and maintain the pursuit of a vision for the club that is now his legacy.

A book of condolence, which will be shared with the Srivaddhanaprabha family, will be opened at King Power Stadium from 8am on Tuesday 30 October for supporters wishing to pay their respects.

Supporters unable to visit King Power Stadium that wish to leave a message can do so through an online book of condolence, which will be made available via lcfc.com in due course.

Both Tuesday’s first team fixture against Southampton in the EFL Cup and the Development Squad fixture against Feyenoord in the Premier League International Cup have been postponed.

Everyone at the club has been truly touched by the remarkable response of the football family, whose thoughtful messages of support and solidarity have been deeply appreciated at this difficult time. 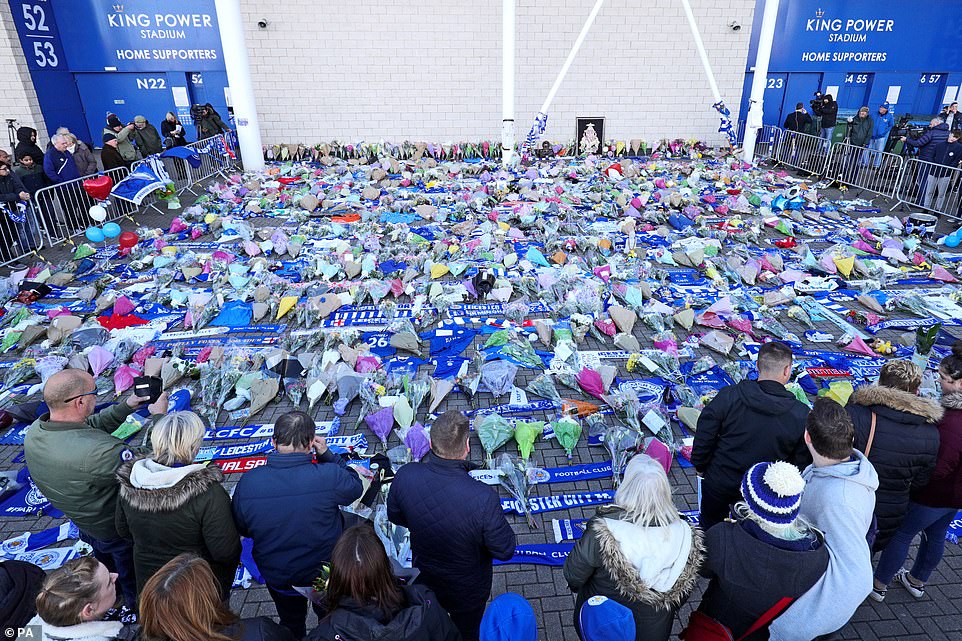 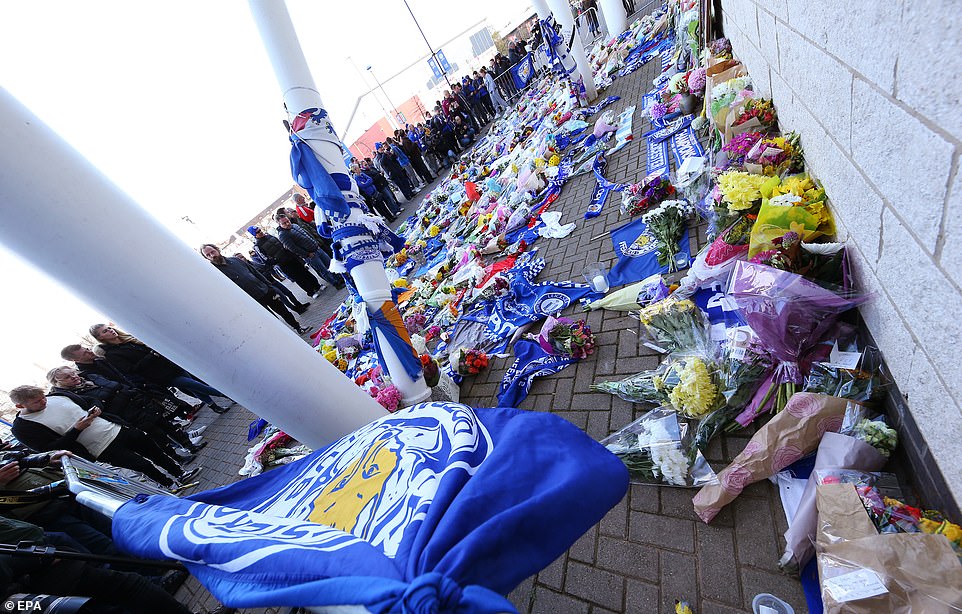 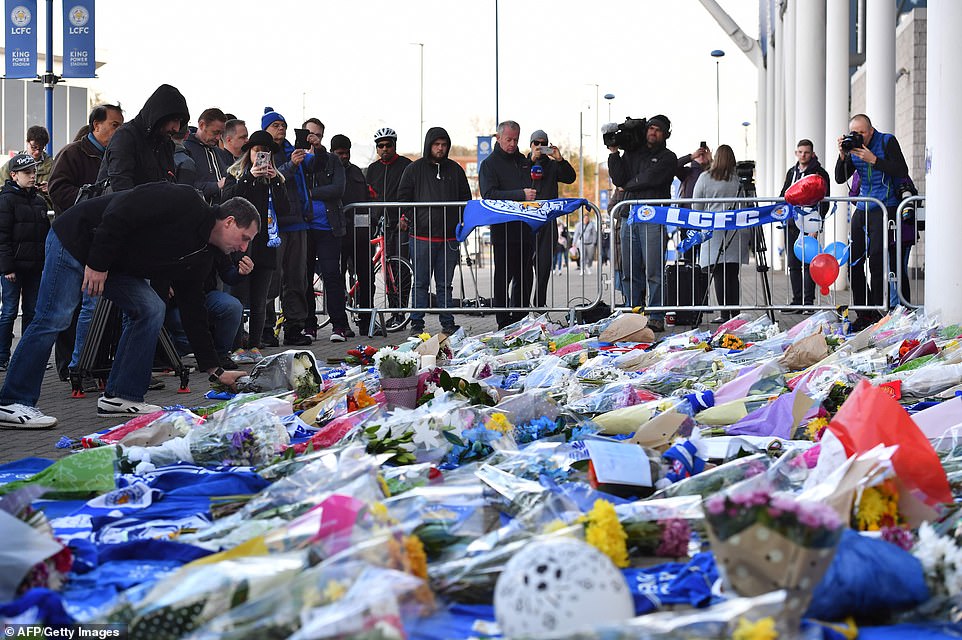 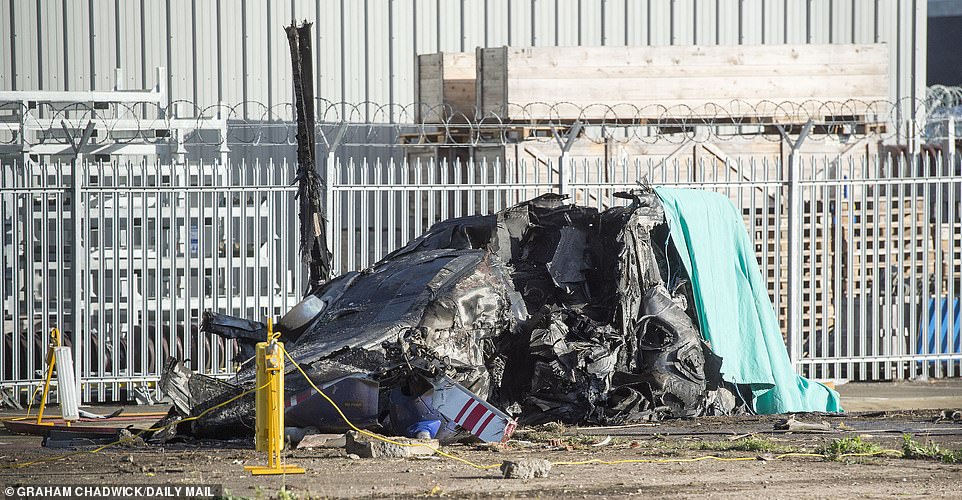 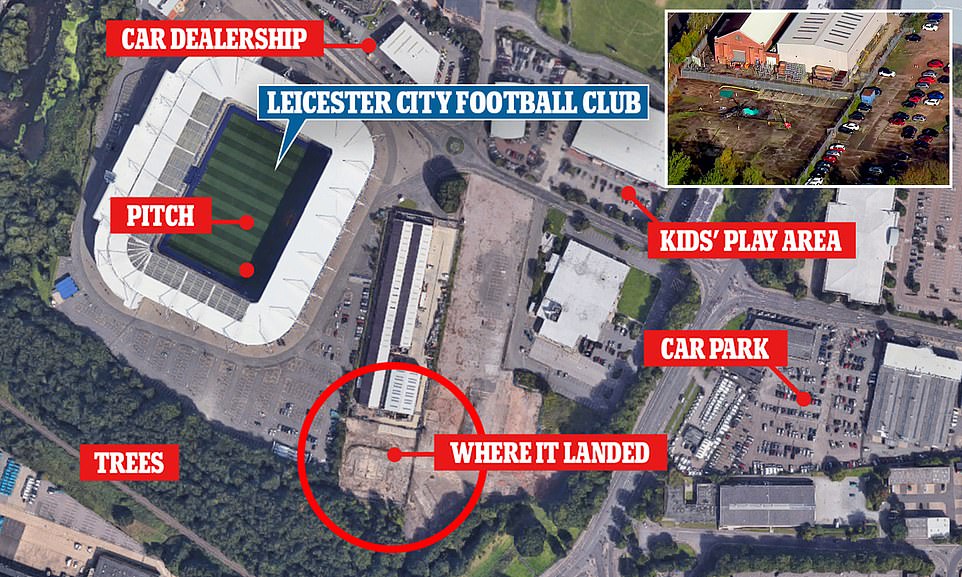