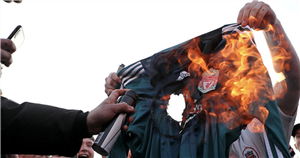 Leeds fans have burnt Liverpool shirts and chased the team bus in protest over the European Super League saga.

And they are first to face the tidal wave of criticism for the plans from pundits including club legend Jamie Carragher, UEFA and the Government.

It has been put in the faces of the Anfield side as they face the Whites at Elland Road, with hundreds of fans gathering at the ground in protest.

It has seen images emerge of Leeds fans burning old Liverpool shirts, using lighters and deodorant to get the fire going.

While others reportedly chased the team bus down the road before arriving at Elland Road for the 8pm kick-off.

Footage was shared on Twitter of fans holding up a banner reading "love for the working class game, ruined by greed and corruption".

A plane was also seen flying over Leeds ground in the afternoon urging Twitter users to don #SayNoToSuperLeague.

Liverpool could not even escape the taunts at their hotel, with a prankster playing ABBA hit "Money, Money, Money" on a saxophone.

A protest also took place within the stadium as Leeds fans wore "football is for the fans" shirts during the warm-ups.

The Premier League sides will be joined in the breakaway league by Real Madrid, Barcelona, Atletico Madrid, AC Milan, Inter and Juventus.

But Liverpool boss Jurgen Klopp made his feelings, which go against owner John W Henry, clear in his pre-match interview.

He said: "My opinion didn’t change. “Obviously I heard first-hand about it yesterday and when you’re trying to prepare a game, a very difficult game against Leeds United.

“Then we got some information, not a lot to be honest, most of the things you more or less can read in newspapers or wherever.

“It’s a tough one. People are not happy with it, I can understand that, but there’s not a lot more I can say about it to be honest, because we were not involved in any processes.

“Not the players, not me. We didn’t know about it. That’s the fact, the facts are out there, and we will have to wait and see how it develops.”