Western Sydney Wanderers are still searching for their first win in almost two months but appear to be at least pulling out of a nosedive after a 1-1 draw at home to Western United that ended their their five-game losing streak.

Given the circumstances, that was no small feat for the Wanderers. They entered this match embroiled in allegations made by several club sources that    assistant Jean-Paul de Marigny was undermining coach Markus Babbel. The pair spent the week strongly denying those allegations. 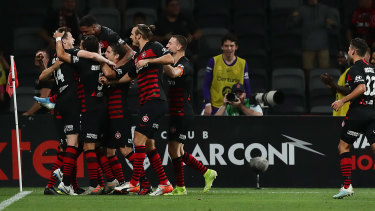 The players prepared for the  crucial game looking over their shoulder, while Babbel said nothing but a win would be enough to end the unrest.

Much to their frustration, they came agonisingly close to clinching one. In a far more spirited performance by this season's standards, they looked  to have claimed three points with Patrick Ziegler's 79th minute header before Western United's Aaron Calver cancelled it out in 87th minute.

On the balance of play, United were somewhat fortunate to leave with a point. Calver's  header was their first real chance on goal since the opening minute, when Panagiotis Kone was on the end of a superb move but denied a close range goal by a reflex save from Wanderers  goalkeeper Daniel Lopar.

From then, the Wanderers seized control of the contest, carving out open nine attempts on goal in the first half. The best of those was a Keanu Baccus  header from a corner that brought out the best in United's goalkeeper, Filip Kurto.

Forward Kwame Yeboah was on the end of a few others but his finishing left a lot to be desired. One attempt from close range almost landed in the top tier of the stand. 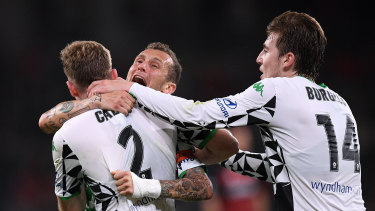 Aaron Calver makes it 1-1 in the 87th minute.Credit:Getty

The hosts continue to surge forward after the break. Fullback Daniel Georgievski joined the attack and came close from distance 10 minutes after the restart.

A superb through ball from young midfielder Baccus opened up United's defence to put Nikolai Muller through and goal-bound had it not been for a professional foul from Connor Pain on the edge of the area. Pain received a yellow card and handed the Wanderers a great chance to break the deadlock with a free-kick from close range. Their marquee, Alex Meier, who was reinstated to the line-up for the match, stepped up and struck a powerful shot destined for the far corner only for Kurto to deny the Wanderers  yet again.

The fans were off their seat moments later when Muller unleashed a spectacular half-volley that came within centimetres of hitting the target.

Just as they thought the breakthrough wouldn't arrive, the Wanderers received a stroke of luck.

United defender Andrew Durante was forced off the field momentarily  at a corner, and the Wanderers pounced on  the numerical advantage from the set piece. Latching on to a near post flick on,  Ziegler followed up at the far post to head the hosts into the lead. They celebrated as if they had won a finals match before being caught out on the counter where Calver punished them. The defender in at the far post unmarked to head past Lopar and snatch a victory from a Wanderers side that never needed one more.