Marco Kurz's job as Melbourne Victory coach appears to be safe, despite the fact that he is under intense pressure with his side just a point off the bottom of the table after a disappointing start to the season.

The German is feeling the strain, especially after the 3-1 loss to Western United on Sunday, and his passing remark to journalists when leaving the post-match press conference was perhaps instructive. 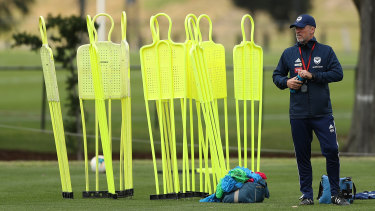 Victory have not impressed in Marco Kurz’s first nine games in charge.Credit:Getty Images

"See you. Hope so," he said, sotto vocce, as he left following another disappointing display.

But sources within the Victory camp on Monday stressed that he has their backing, in what is a difficult transition season after the departure of club legend Kevin Muscat, who quit as coach following the heavy defeat to Sydney in last season's A-League semi-final.

"It's not been easy but we know it will take time and we are looking at other ways of supporting him," one well-placed insider, who did not want to be identified, said on Monday.

"Discussions are taking place, the January [transfer] window is on the horizon and we are hopeful that things will turn around. Changes need to be made, but we are not the sort of club that makes hasty decisions." 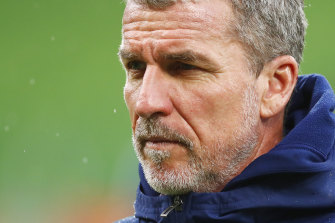 The change from Muscat to the former Adelaide United boss has been painful as Victory have slumped to second bottom of the table with only two wins from nine games under Kurz.

He has time to turn things round, but needs to act swiftly.

As another source said: "he needs to do something different. Whatever he is doing, it isn't working."

Victory officials are, however, mindful of the last time a new coach began the season so badly and was dumped  mid-season.

Mehmet Durakovic, who replaced Ernie Merrick, was sacked four months into the 2011-12 campaign.

Victory brought in Northern Irishman Jim Magilton, but that didn't arrest the slump and Victory failed to make the finals.

The navy blues have played finals soccer every season since, winning two titles and finishing runner-up on another occasion, but unless things improve sharply they could well miss out this season.

Their position, if anything, flatters them – they have just eight points.

Central Coast, bottom and with a point less, have two games in hand and Brisbane and Newcastle, who both also have eight points, have one and two games respectively in hand as Victory (along with Western United) have not yet had their bye matches.

The fans are angry and voting with their feet; crowds are falling and are more critical now of a team that has conceded the most goals in the A-League this season.

Kurz's biggest problems have been his foreign signings.

Kristijan Dobras, the Austrian attacking midfielder, has contributed little and has not even been in the matchday squad since the round-six loss to Sydney.

Jakob Poulsen and Migjen Basha have both been part of a pedestrian midfield that has lacked creativity.

German defender Tim Hoogland has been struck down by injury all season and has played less than half a game.

History shows that any team that wants to be competitive has to have most of its visa players performing well all season. So far only Ola Toivonen, the club captain, meets that description.