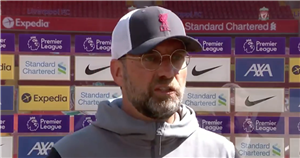 Jurgen Klopp confessed Liverpool do not deserve to be playing Champions League football after they conceded another late goal against Newcastle to dent their top-four hopes.

The Reds led for over 90 minutes at Anfield after Mohamed Salah's third-minute opener, but Joe Willock struck deep into added time to snatch a point for the Magpies.

The disappointing stalemate comes five days after Liverpool conceded in the 87th minute to draw 1-1 with Leeds.

It also means the champions passed up the chance to move into the top four, and Klopp admits his side do not deserve to compete with Europe's elite if they keep throwing away their lead.

"Why it happened, I don't know," the Reds boss told BT Sport of Willock's last-gasp equaliser. "We had to keep the ball.

"In a specific way we don't fight enough. Keep ourselves in a position where we dominated the game.

"We had 70 per cent of the ball, we should have 80 per cent. We created a lot of chances, didn't score with them, so we have to create more.

Was a draw a fair result at Anfield? Have your say in the comments.

"That is how it is. We don't do that well at the moment. They fought for it and we got nothing pretty much, but a point. It feels like a defeat.

"If you deserve, you deserve it. I didn't see us deserve it today playing in the Champions League next year."

Moments before Willock's goal, Callum Wilson thought he had scored only for VAR to disallow the strike due to a handball infringement by the striker.

Klopp lamented how his side failed to kill off the game and said Newcastle were fully deserving of their point.

The German added: "We scored a wonderful goal, didn't finish the game off. Didn't play enough. A counter-attack can happen but we had to just keep going, keep the ball and make them run.

"We kept them alive and they deserved the goal. They scored the one before, unlucky for Wilson but it is handball. We don't even take this present. Really tough to take."