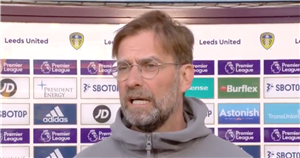 Klopp faced the media ahead of Liverpool's clash with Leeds and the German was quizzed on the proposals, which emerged on Sunday night.

The prospect of a European Super League has prompted widespread backlash from Liverpool fans, who removed their banners from the Kop and staged a protest outside Anfield.

Klopp previously hit out at the concept of a breakaway division, claiming in 2019 that he hoped "there will never be this Super League".

And he reiterated his stance on the breakaway division on Monday night, admitting he and his players were not consulted on Liverpool's involvement in the division.

"My opinion didn’t change [since 2019]," Klopp told Sky Sports . "We got some information, not a lot, and it’s a tough one. People are not happy with that, I can understand that."

"We are not involved in any process, not me or the players.

"Remember: the most important parts of the club are the supporters and the team. And we should make sure nothing gets in the way of that."

In his full interview in 2019, Klopp told German outlet Kicker : "I hope there will never be this Super League. With the way the Champions League is now running, football has a really great product.

"For me, the Champions League is the Super League in which you don’t always have to play the same teams. I also don’t feel like my club has to be seeded.

"Of course, it’s economically important, but why should we create a system where Liverpool can play against Real Madrid for 10 years in a row? Who wants to see this every year?"