KEOWN TALKS TACTICS: Arsenal CAN play it out from the back… they just need to use David Luiz sensibly

Playing it out from the back is paramount to modern-day football. It has made the game more of a spectacle to watch, and more satisfying to play in, too.

When I first started playing, the opposition goalkeeper might have hold of the ball one moment, then I’d be heading it the next. We won’t see a return to that, nor do we want to. The Premier League has evolved. Ten years ago, the average number of passes per game was 771. Now we are averaging 906.

Playing it out from the back has become the norm, particularly with the introduction of the new goal-kick rule. Yet last week we saw two high-profile examples of when it can go wrong. Arsenal tried to play it out against Watford, Sokratis gifted the ball to the opposition and they scored. 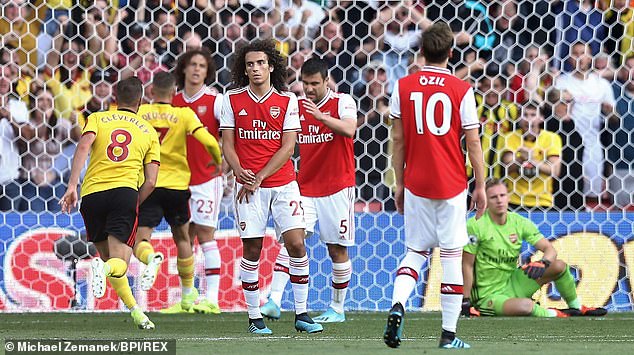 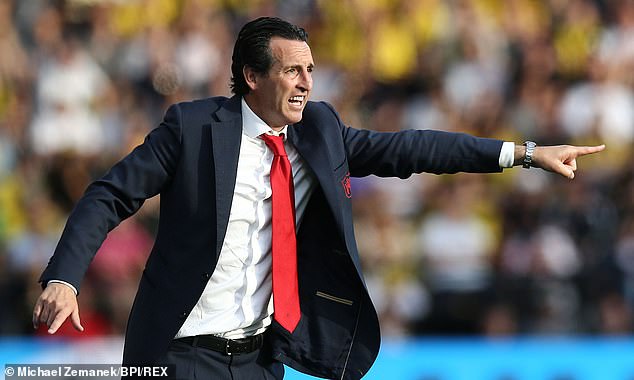 Manchester City did something similar against Norwich, too, with Nicolas Otamendi caught dawdling in possession at Carrow Road. When it comes to Arsenal specifically, their take on the new rule has been to have a centre back standing either side of Bernd Leno inside the box.

I believe that isn’t necessary. In David Luiz, Arsenal possess possibly the most creative central defender in the Premier League, but he hardly touched the ball from restarts last weekend. Watford boss Quique Sanchez Flores had his forwards swarm on the visitors from every goal-kick.

That is what the modern manager does – Jurgen Klopp once said an effective counter-pressing system is better than any playmaker. If you win the ball high up the pitch, the rewards can be great. 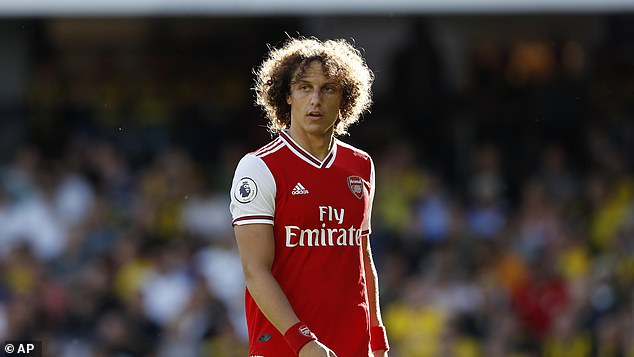 So if Arsenal want to proceed with playing it out, it’s up to them to beat the press and find a way out. Having Sokratis and Luiz inside the box limited their options at Vicarage Road.

It’s like having two men stood on a free-kick. Sokratis seemed obsessed with passing to Matteo Guendouzi and, well, we know the rest. For all his faults defensively, Luiz is a good passer. It’s time to play to his strengths. As their most proficient player in possession, Arsenal ought to consider leaving him as the only outfield player in their box.

He can receive a short pass from Leno, control it with his left foot then pick a pass with his right. In this era of statistics, it is interesting to note how no player attempted more through-balls than Luiz in 2018-19. The Brazilian managed 42 – the next nearest defender was Antonio Rudiger on eight.

Unai Emery has to try to use that to his advantage. Luiz could act as his quarter-back.

He does not only have to pass to Sead Kolasinac on his left or find a team-mate in midfield or out wide. If he wanted, he could play a long diagonal ball over the top for Nicolas Pepe to chase. We know he is capable of it and with the opposition pressing high, their defenders will be close to the halfway line. 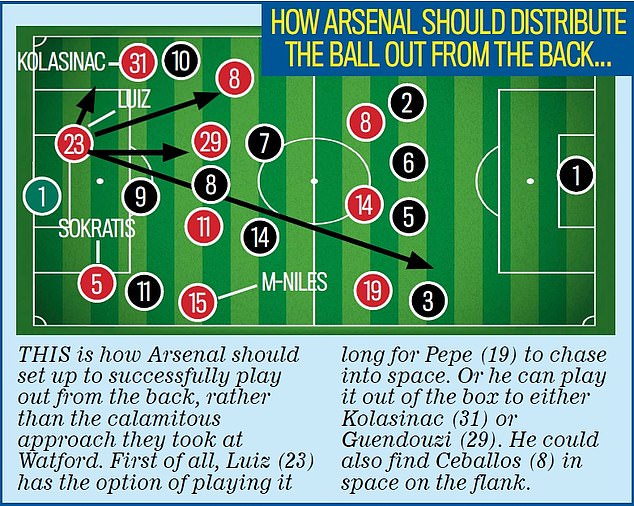 That leaves a lot of room behind for Arsenal’s rapid forwards to run into. That is not going against the spirit of playing it out from the back – it is about having those options so you can beat the press and use the space available.

By standing close to his goalkeeper at the goal-kick, Luiz would give himself time to decide what to do before he can be closed down. This shape also means you test your opponents’ forwards – they’re wondering who to mark. Do I press? Or do I pick up the man behind?

The way Arsenal were set up last week, they were very single-minded. Their predictably made them sitting ducks. Watford knew what they were going to do. They used that against them and turned a 2-0 defeat into a 2-2 draw. Other teams would do the same.