Graeme Souness did not want to make the admission but, through gritted teeth, he forced the words out.

During a fascinating discussion with Jamie Carragher on Monday Night Football last month, one of the greatest players in Liverpool’s history was asked to pinpoint the department where his old club trail Manchester City.

‘Midfield,’ Souness grimaced. He pointed out that Jurgen Klopp had bought two players, in Fabinho and Naby Keita, for the department during the summer and tried to add a third in Nabil Fekir, whose switch from Lyon collapsed on a failed medical. 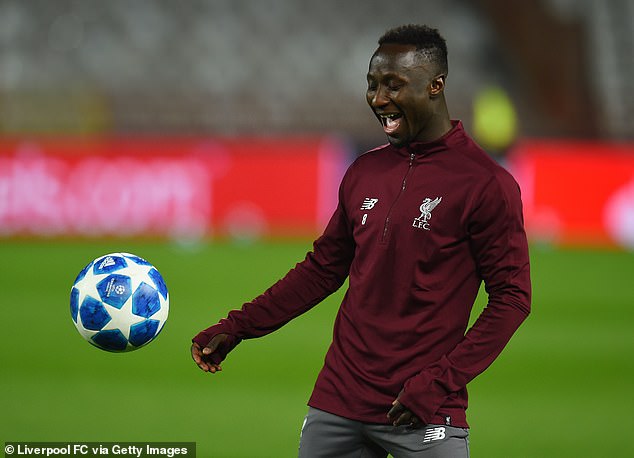 ‘It hurts me to say,’ Souness added. ‘But that is where they are short.’

Those words came to mind in Belgrade on Wednesday during Liverpool’s worst performance of the season. The reaction to the setback in some quarters has bordered on hysteria but there is no doubting that something in the team’s make up, currently, is not quite right.

Liverpool look like they need an individual to spring forward and take things by the scruff of the neck. This, in many ways, is the point when Klopp will hope Keita steps forward and begins to start living up to his exalted reputation.

In no way is it to be concluded that Keita is being viewed as a dud. His debut against West Ham United on the opening weekend was excellent and he followed up with a glorious moment – a back heel turn the a beautiful pass to Mohamed Salah – in the win at Crystal Palace eight days later. 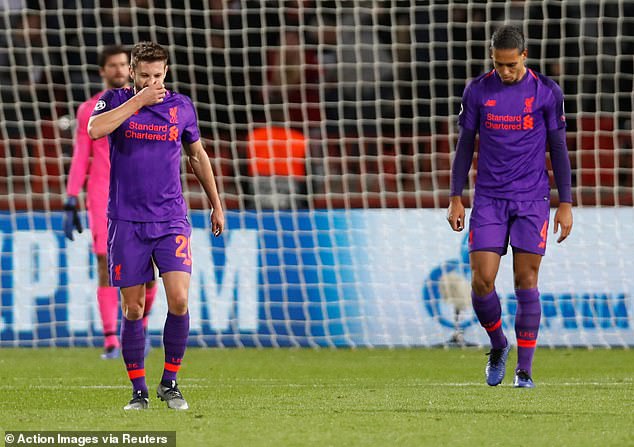 He also made a significant contribution to helping Liverpool rescue a point at Chelsea at the end of September, when he came off the bench. Be in no doubt that he has the attributes to be a top class performer, one who can thrive in England.

Since then, though, Keita has been in the shadows. A back spasm in Napoli temporarily hospitalised him, a hamstring issue sustained while away with Guinea cost him another three weeks. For a player who thrives on high intensity demands, the disruption has been infuriating.

What Klopp needs now, then, is for the snapshots to become something more meaningful and consistent. Liverpool’s manager had wanted Keita in his team practically from the time he was appointed three years ago. There is no shaking his conviction that Keita will be a success.

You can sense the desire amongst supporters to see him become a hero. The No 8 jersey he wears conjures memories of match winning deeds and when he spoke in July, you could have imagined Steven Gerrard, the man who had the shirt before him, nodding in approval. 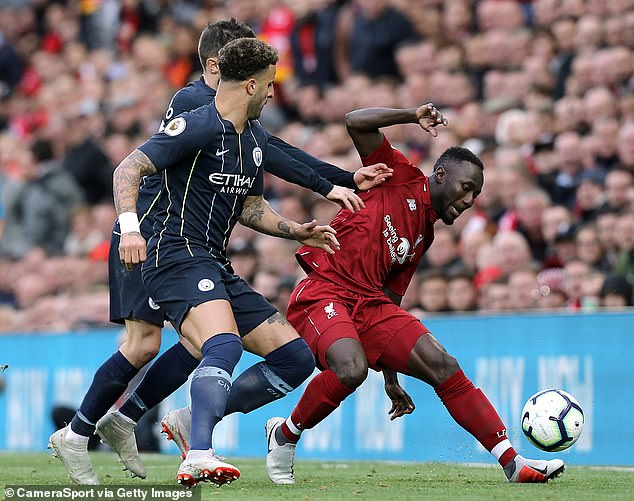 ‘I have a huge desire to win,’ said Keita. ‘That is why I am aggressive in a positive sense on the field. My first mind-set when I am out on the field is to defend well and not concede. As a midfielder, when you have sealed things up at the back, the job is to then provide ammunition for the strikers.

‘Also, if I get a chance that comes my way, I want to take it and score. But I am a team player. I think about the team and the group always.’

A team player who wants to tackle and assist and score? Someone with those ambitions is a manager’s dream and someone who can do that on a consistent basis will soon help his side make giant strides. The midfielder who does it all these days is rare indeed. 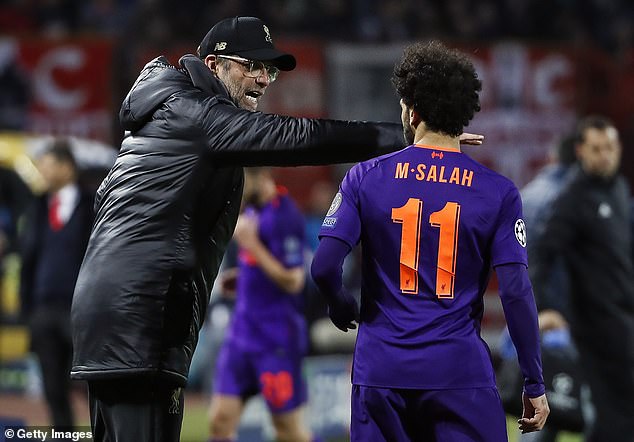 The general consensus is that Liverpool have been scratchy this season, that their play lacks the sparkle of 12 months ago but Keita, potentially, has the qualities to make a significant difference and provided the new dimension Klopp needs.

He is fit again and Sunday’s clash with bottom-of-the-table Fulham should see Keita restored to the starting line-up. Here is his opportunity to show the big build-up he was afforded on the completion of his switch from Leipzig was not just idle words.

‘Gerard Houllier spoke to me about Liverpool,’ Keita said of Liverpool’s treble-winning manager. ‘He told me it was a massive move and now it was in my hands to make it a success. He told me: “do everything you possibly can – establish yourself”.’

He would do well to remember that advice the next time he starts. Keita is the man who can solve the middle muddle.

For a man who touched the ball seven times and ran a mere 634 metres, the ovation was nothing short of remarkable.

Yerry Mina was finally given his first taste of English football against Brighton and the experience – however brief – will be something he looks back on with fondness; Evertonians have been desperate for a sight of their £28million defender and the long wait ended against Brighton.

Mina, of course, was never going to be anything other than warmly received at Goodison Park and he clearly has all the makings of becoming a crowd favourite – a Colombia flag was unfurled in the Gwladys Street at the final whistle and he made a beeline to see the fans holding it. 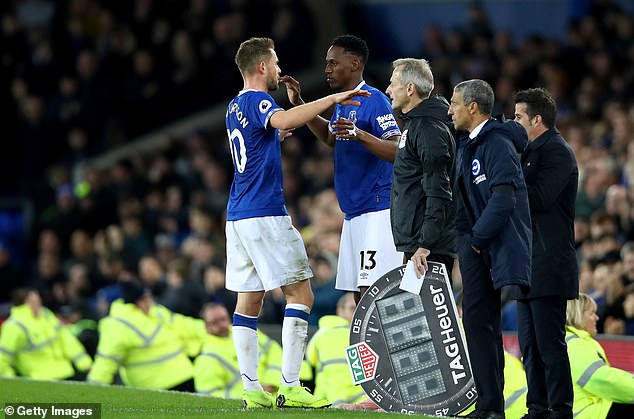 Now, though, the hard part begins. Given Phil Jagielka’s latest injury and Kurt Zouma’s ineligibility, Mina will start at Stamford Bridge on Sunday and these are the games for which he was brought to make a difference, to help snuff out big threats.

‘We signed him as we believe in him,’ Everton head coach Marco Silva said with confidence. ‘Everyone is anxious to see him, he really wants to play and he is working hard. He is hungry and when he gets the chance I think he can perform.’

So far the bulk of Everton’s summer transfers have worked. Richarlison has proven to be a superb addition; Lucas Digne is playing with gusto of a young Leighton Baines, while the technical gifts of Andre Gomes – who was excellent against Brighton – and Bernard will enhance the team’s quality.

What will accelerate progress more than anything, however, is defensive resolution. Everton have only kept two clean sheets in 13 matches so far and that record must be improved. The onus, then, will be on Mina to make the difference. The challenge begins for him on Sunday. 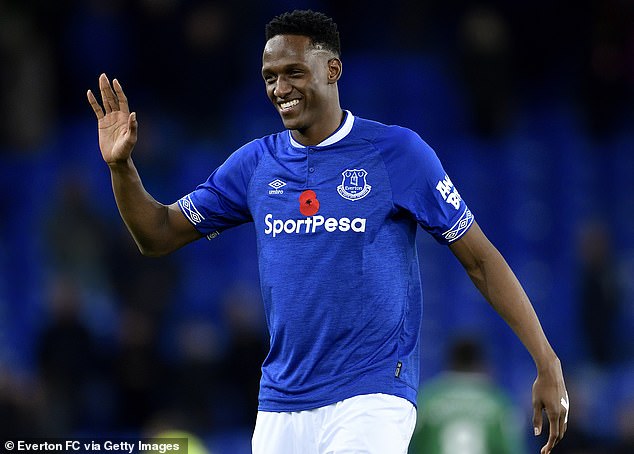 MOMENT OF THE WEEK

We will change it to ‘moments’.

The blistering change of gear Richarlison showed to score his second goal against Brighton took the breath away.

The atmosphere in Belgrade, meanwhile, was everything that you could want from a European football match.

These occasions would potentially disappear if the preposterous plans for a European Super League come to pass. 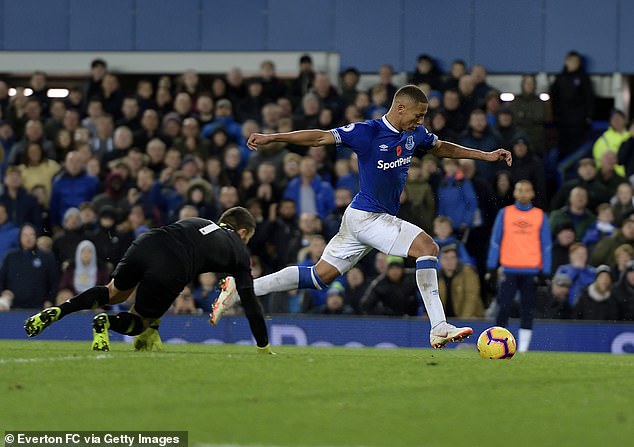