Chelsea’s new signing Kai Havertz says the Premier League has no bad players and that the games are “exhausting”.

Havertz signed for Chelsea from Bayer Leverkusen last month, and has made five appearances and scored three goals for Frank Lampard’s side so far.

The 21-year old scored a hat-trick as Chelsea romped to a 6-0 victory against Barnsley in the third round of the Carabao Cup, but is yet to score in his four Premier League appearances. The German international says the league is “more intense” than what he experienced in the Bundesliga due to the fact that “everybody is at a very high level”.

“It was difficult for me, especially because the Premier League is a completely different league,” Havertz told Chelsea’s official website. “It’s more intense and I noticed that in the first few games.

“The intensity in the duels and the runs is much higher. It’s a completely different league and the games are very exhausting.

“The Bundesliga isn’t worse but I noticed differences. It seems to me like there aren’t any average or bad players here – everybody is at a very high level.”

Havertz was satisfied with his performance against Barnsley, but says he is aware it will take him time to adjust to his new environment and build relationships with team-mates.

“The hat-trick was good for me,” he said. “The start was a little difficult because I only trained with the team for five or six days, then played the first game right away. It was also a very big step for me to leave my family and familiar surroundings. Of course, it takes time to get it right.”

Havertz is currently with the German national team ahead of Nations League fixtures against Ukraine and Switzerland, both live on Sky Sports.

The midfielder made his international debut in September 2018, and says he is remains patient in his quest to add to his eight appearances so far under Joachim Löw.

“In my two years with the national team, I haven’t played too many games but I’m still relatively young,” he said.

“I have a lot of games ahead of me which is why so far I’ve always remained calm. I have enough self-confidence to attack the national team.”

Ukraine vs Germany – Can Werner rediscover his form? 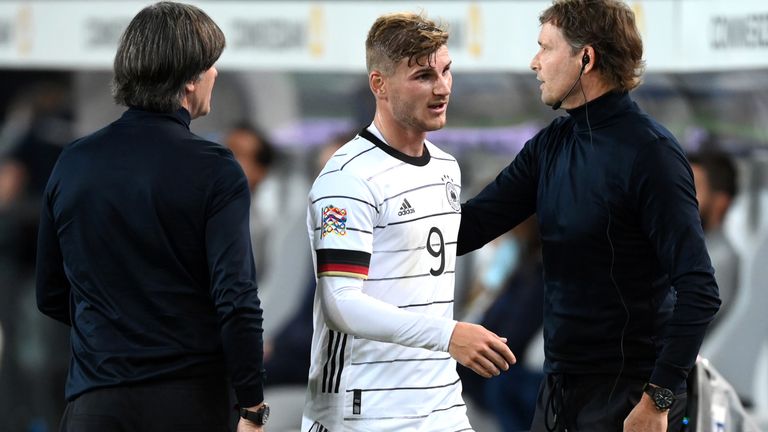 There are seven Nations League games taking place on Saturday with all fixtures, including Ukraine vs Germany, live on Sky Sports.

Team news: Germany will welcome back Joshua Kimmich, Manuel Neuer, Leon Goretzka and Serge Gnabry after the Bayern Munich quartet were exempt from playing in the friendly against Turkey. Real Madrid’s Toni Kroos and Chelsea’s Timo Werner have also bolstered the squad having sat out the midweek 3-3 draw.

Ukraine face a selection crisis after a number of their players were declared unavailable for selection due to injuries and positive coronavirus test results.

Head coach Andriy Shevchenko named 45-year-old assistant coach Oleksandr Shovkovskiy on the bench against France but goalkeeper Mykita Shevchenko has been called up to join the squad.

Mykola Matvienko and Junior Moraes have withdrawn from the squad after their tests came out positive but Viktor Kovalenko, Romero Marlos and Valery Bondar have been called up. Heorhiy Bushchan conceded seven on debut against France but is expected to stay in goal.

Player watch: Ruslan Malinovskyi will shoulder Ukraine’s creative onus in the No 10 role but there are other dangerous members of Shevchenko’s team.

West Ham’s mercurial talent Andriy Yarmolenko will provide a threat cutting in from the right while Spain will also have to be mindful of Viktor Tshyankov, who has three goals for Dinamo Kyiv this season. Roman Yaremchuk will likely lead the line for Ukraine.

Chelsea outcast Antonio Rudiger was substituted after an hour against Turkey but could be in line for another start as part of a three-man defence alongside Emre Can and Niklas Sule.

Havertz is starting to find his feet at Chelsea, and Low could operate him in the No 10 role behind Timo Werner and Gnabry.

Other matches on Sky

All other Nations League games on Saturday will be available on Sky Sports Football, via the red button or the Sky Sports app: