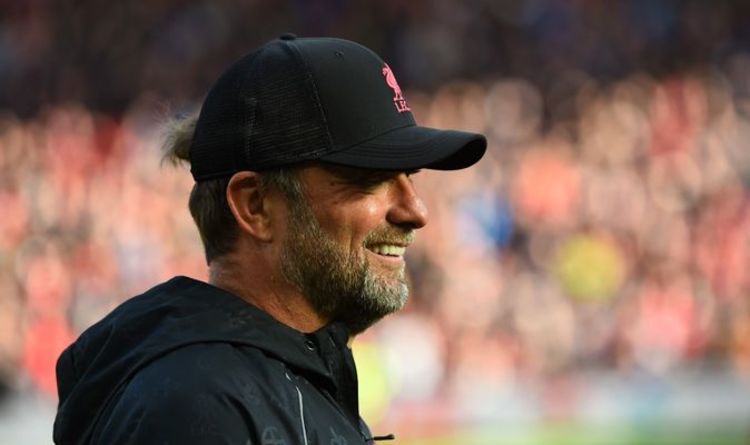 Jurgen Klopp has been looking to improve his Liverpool squad for some time and could be planning two new arrivals for his frontline. The Liverpool boss has had his eye on a move for Wolves winger Adama Traore after hailing the Spain international as “unbelievable”, while reports suggest he could also launch a move for one of Europe’s brightest talents.

Klopp only made one signing during the summer transfer window after opting to bring in a central defender to avoid a similar injury crisis to the one that derailed their title defence in 2020-21.

Ibrahima Konate was signed in a £35million deal from RB Leipzig, although the Frenchman has been forced to be patient for a run in the first team.

The 54-year-old boss may have looked on in envy as Manchester City spent a British record £100m to sign Jack Grealish.

Chelsea then broke their own transfer record to land Romelu Lukaku from Inter Milan, while Arsenal spent a cool £150m on six new signings.

But it appears Klopp could get his chance to complete moves for his top two targets, whom are widely recognised as some of Europe’s biggest talents.

JUST IN: Premier League clubs ‘give up’ as six stars miss PL matches

Liverpool have been linked with a move for Red Bull Salzburg sensation Karim Adeyemi, who has already struck 11 goals in all competitions this season.

The 19-year-old has scored twice in as many Champions League games for the Austrian side with notching a brace against Lille.

Adeyemi recently made his international debut for Germany and made an immediate impact, scoring in the 8-0 thrashing of Armenia.

His performances have not gone unnoticed in front of onlooking scouts, with Bayern Munich and Barcelona thought to be monitoring his situation.

It is believed that Adeyemi could favour a move to Bayern, as the young striker played for the Bavarian giants when he was just 10 years of age before being released.

According to El Nacional, Klopp has turned his attention to the starlet after being knocked back in his attempts to lure Barcelona star Pedro to Anfield.

The 18-year-old made a huge impression on the world stage last season after breaking into the side under Ronald Koeman and becoming a regular presence in the Blaugrana midfield.

Pedri then starred at Euro 2020 after being called up to Luis Enrique’s squad and played a key role in La Roja’s run to the semi-finals before losing to Italy.

Barca are desperate to tie down the former Las Palmas academy graduate to a long-term contract but his current deal expires in 2022.

With no new agreement on the horizon yet, Liverpool had attempted to open talks with the Catalan giants only to be knocked back, the report adds.

And that could see Klopp step up his attempts to sign Adeyemi, who could be available for a cut-price fee.

The German head coach has had the luxury of being able to choose from Sadio Mane, Mohamed Salah and Roberto Firmino for the last four years as his first-choice front three.

But with Firmino turning 30, and Salah and Mane next to reach the milestone in 2022, Klopp has been forced to think ahead for the future.

He has already got Diogo Jota lined up to replace Firmino, with the £41million signing from Wolves scoring 12 goals in 26 Premier League appearances so far.

Traore is another player who could be heading to Merseyside in the near future too as talks over his new contract have stalled.

Klopp is a huge fan of the 25-year-old, who is arguably the fastest player in the Premier League, after hailing the winger as “unbelievable” back in March.

Speaking after Liverpool’s 1-0 win over Wolves, he said: “The Leipzig game was difficult but tonight was difficult for completely different reasons.

“The speed of Traore is actually undefendable in moments.”

It remains to be seen how much Klopp will have available to spend in January and if he will choose to bolster his squad.

But if he is looking for reinforcements, Traore and Adeyemi are likely to be at the top of his wishlist as the Reds look to compete on all fronts for silverware.