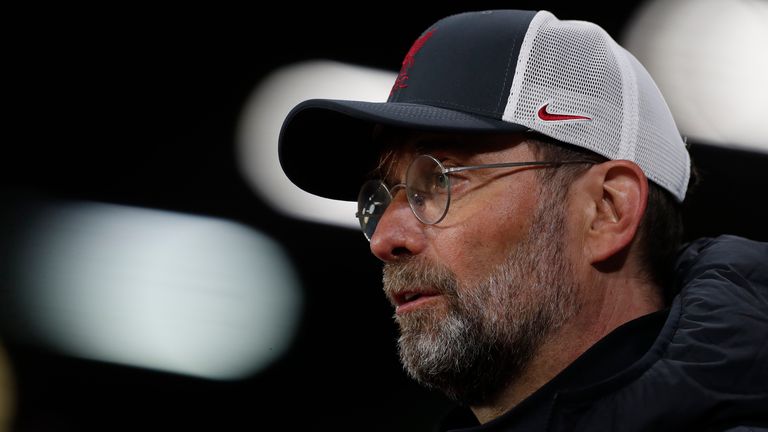 Liverpool boss Jurgen Klopp admits his side face a must-win game against Manchester United at Old Trafford on Sunday if they are to qualify for the Champions League next season.

United thrashed Roma 6-2 in the first leg of their Europa League semi-final, with Edinson Cavani, Paul Pogba and Bruno Fernandes all thriving in attack.

Klopp says he thinks United will be desperate to win because they still believe they have a chance to pip Manchester City to the title, but insists Liverpool themselves have to take three points if they want to have any chance of finishing in the top four.

When asked if Liverpool must win at Old Trafford, Klopp responded: “More than 100 per cent. Without winning games we have no chance of having European football.”

Commenting on United’s form and fixture congestion, he added: “When you play Thursday and Sunday every week, you get used to it but it doesn’t make it better.

“It’s a tough challenge for them. Friday is recovery, Saturday second recovery and then they play. They have no chance to change things but I don’t think they want to really at the moment.

“It will be a tough game, an intense one. We watched United last night and they are good!

“Especially when you let them play. They were flying. I am pretty sure United still feel they have a chance [for the title]. Both teams have to win it which is a good recipe for the game.”

Virgil van Dijk, Jordan Henderson, Joel Matip and Joe Gomez have all begun running as part of their recovery programmes but Klopp says none of the four are any closer to a return to full training.

When asked about Van Dijk’s return, he replied: “I don’t have enough English words to say the same thing that often.

“Yes he is running like Hendo, Joe and Joel. Rehab always starts with straight-line running. Lot of things to come, a lot of steps before finally ready to join team training.”

Klopp insists a failure to qualify for the Champions League next season will not affect his summer transfer plans significantly.

The Liverpool boss says he already knew money would be tight after a year of the coronavirus pandemic, which the club estimate will cost them £120m by the time fans return to grounds.

Their latest accounts published this week showed the club made a pre-tax loss of £46m to the year ending May 30, 2020 and there will be further financial hurt to come.

So not making the top four will not materially change much in Klopp’s plans.

“Playing in the Champions League is massive, especially financially. If we can’t make it that’s not good, definitely not, but I don’t think it will change anything,” he said.

“The situation is difficult before, it will be difficult after.”

After what he described as an ‘unacceptable’ performance in the draw to Newcastle last time out, Jamie Carragher explains what Liverpool must do in their must-win trip to Manchester United this Sunday to keep their top four hopes alive.

The Sky Sports pundit joined Peter Smith on the Pitch to Post Preview Podcast to look ahead to the big game at Old Trafford – which you can watch live on Sky Sports – and also spoke about why he believes United are only a couple of signings away from being serious Premier League title contenders next season.