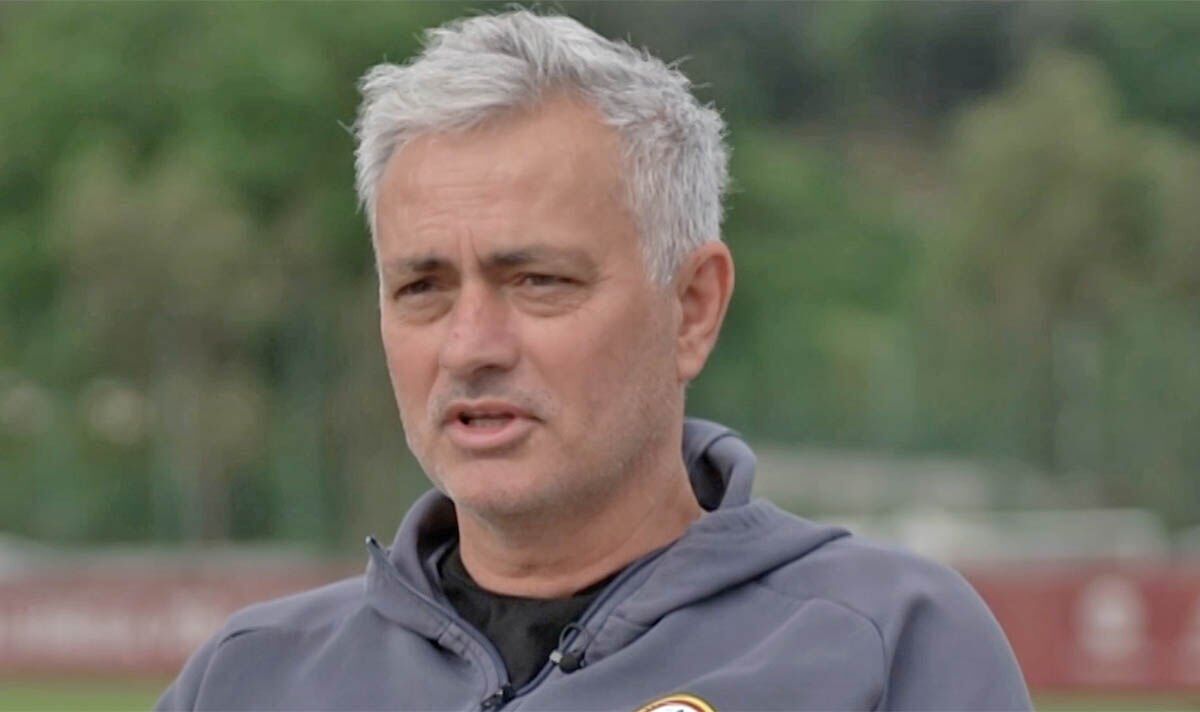 Jose Mourinho has insisted he still wants Manchester United to do well despite his brutal sacking in December 2018. The Portuguese was the last manager to win a trophy with the Red Devils. And, amid their current crisis, he’s now spoken out about his time at Old Trafford.

Manchester United hired Mourinho as their replacement for Louis van Gaal in 2016, shortly after the club had won the FA Cup with victory over Crystal Palace.

He then proceeded to win three trophies at Old Trafford, with the Community Shield then paving the way for Carabao Cup and Europa League triumphs.

United didn’t win the league under Mourinho, though, and he lost his job in December 2018 after overseeing a disastrous start to the season.

Nearly four years on, and the Red Devils are still a long way off competing for the biggest and best prizes in the game.

And Mourinho, speaking to Sky Sports, has insisted he wants the Red Devils to do well – while also opening up on his improved relationship with Henrikh Mkhitaryan.

“We won together three trophies at Manchester United,” he said.

“And I say unfortunately because, yes, I like the club very, very much and I wish them the best.

“We won three titles together and everything went well. In the second season, we were together it was a little bit different.

“And the thing that makes me really happy, because always people at the beginning try to go with the negative, to say Jose has no chance Jose is the sort of guy when things go wrong they never go well again.

“And it was proven the opposite. We were very mature, very honest with each other.

“I’m so happy with Mkhi and people’s understanding that with me not everything is black or white and it’s possible a player becomes with a different relation than it was in the past.”

Mkhitaryan joined United alongside Mourinho in 2016.

However, the Armenia international toiled for 18 months before being offloaded to Arsenal in a swap deal that saw Alexis Sanchez head in the opposite direction.

At Roma, however, Mkhitaryan has flourished under Mourinho.

The 33-year-old has scored five goals and clocked up six assists from 31 appearances in Serie A this term.

And he’s also played a key role in their surge to the final of the UEFA Conference League, where they’ll face Feyenoord.

Meanwhile, regarding Mourinho, former United star Rio Ferdinand wants to speak to the Portuguese about his time at Old Trafford.

Speaking on his YouTube channel, Ferdinand said: “I think Jose Mourinho’s quote has aged so, so well.

“And me for one, I would apologise maybe to some extent in terms of the way you kind of looked at him and judged him.

“I still think there were flaws in some of the ways he handled people and handled some of the situations that he was involved in.

“But in terms of looking behind the scenes, that [quote] he said in 2019 on finishing second in the Premier League, that has aged so well.

“We can see that there’s been stuff going on that’s wrong behind the scenes, but at that time we didn’t know the extent of it. Obviously Jose Mourinho did.

“Listen, I’d love to have half-an-hour talking to Jose just about his time there, just to work out where he was at with a bit more detail than we’ve actually ever seen, and then gauge it to where we are now – that would be very insightful.”