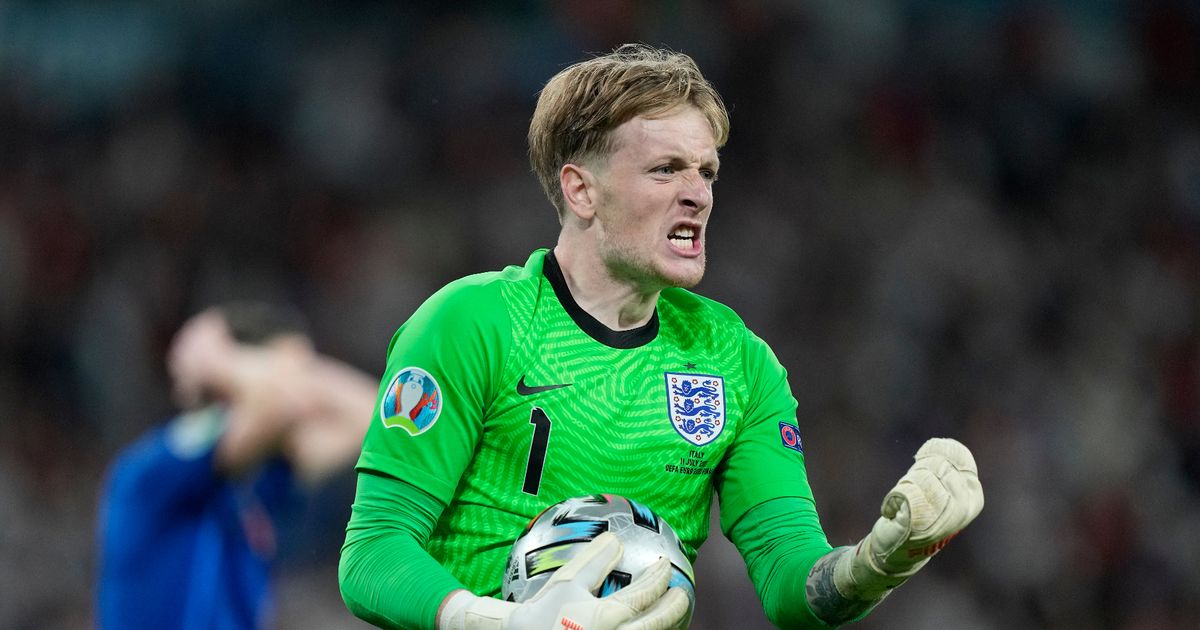 Jordan Pickford loves making his critics eat their words every time he pulls on an England shirt.

And the Everton goalkeeper couldn’t care less if some of them still seem to want him to fail, so long as he’s keeping clean sheets for his country.

Pickford has kept 11 of those so far this year, equalling a record set in England’s golden 1966 World Cup-winning year.

And he feels there are plenty more to come because he is in the form of his life – even if some TV pundits want to paint him as an accident waiting to happen.

Roy Keane, Gary Neville, Ian Wright and Lee DIxon all criticised Pickford at times this summer. And that was despite him winning the Golden Glove at the Euros and saving two penalties in the final.

But Pickford’s message to his critics is: ‘Let them talk!’

“I’m focused on doing everything I can on the training pitch like always, giving 100 per cent, always improving, trying to get that one or two per cent better each time, keeping clean sheets.

“I think if they are still making noise then it’s a good thing really. For me, it’s just performing on the pitch and not getting distracted by any of that.”

Pickford freely admits his form for Everton dipped for a spell last season.

But he bounced back in style – and claims something changes when he pulls on a Three Lions shirt.

Pickford said: “As a kid, you always dream to pull the England shirt. Sometimes I hold my hand up, in the past for Everton I’ve made a few errors.

“But you can only learn from them really and I feel like that’s what I’m doing.

“For England, when I pull that shirt on, I’m just the same person, just giving my all all the time and hoping to clean sheets. It’s definitely a magic shirt.”

Pickford has always been known as a top shot-stopper, and has a world class passing range with the ball at his feet that can change games in an instant.

But he feels there is one area of his game he has improved dramatically over the last few months.

Pickford said: “I think the biggest thing is decision making – making the right pass at the right time. That’s what I’ve improved on most.

“I've always felt like I've been good at distributing the ball, it’s just doing it at the right time because if I’ve got it, I’m in charge, and I need to manage the game.”

Pickford may still have his doubters – but England boss Gareth Southgate certainly isn’t one of them.

He said: "We've always had belief in his abilities. I think that's been questioned externally but never internally. His performances have always warranted that faith.

"There's the goalkeeping ability of keeping the ball out of the net and then there's his ability with his feet, which is so important in the modern game.

"He's got a fantastic range of passing and the way that we want to play that is very, very important.

"There's always room to continue learning and in the last six months especially his calmness in the matches has been a real standout and a progression.”