James Milner is the only Liverpool player to regularly keep his place in the team’s starting XI since Jurgen Klopp’s first game in charge back in October 2015.

Three years on, he believes the Reds’ improvement in consistency and newfound ability to grind out results has given the Premier League table-toppers the ability to challenge Manchester City for this season’s title.

Speaking exclusively to Sky Sports, the 32-year-old midfielder discussed Liverpool’s impressive development, swapping his Christmas dinner for pasta and his wish for former club Newcastle – who the Reds face on Boxing Day – to return to their best.

“Probably some pasta,” Milner said with a smile when discussing what he would eat on Christmas Day. “You want to get up early to see the kids, or you’ll never see them.

“It’s tough. That’s the side people don’t see. You have to balance it, get it right and be a dad as well as a footballer. That is part of the job. Around this time of year it’s so important.

“It’s something I’ve been fortunate to do for a long time. I remember my first Christmas with Leeds, training Christmas Day. I wasn’t old enough to drive yet – so I had to get picked up and taken in!”

Leeds is the club that handed Milner a path into professional football and it is 16 years to this day that he became the Premier League’s youngest scorer – finding the net at 16 years old and 356 days – against Sunderland. Milner moved from Leeds to Newcastle in 2004 and enjoyed four years at St James’ Park, making 136 appearances across all competitions. He made no secrets about his excitement of facing his former team on Boxing Day.

“It’s an exciting fixture,” he added. “The amount of goals and classic games you see. Two clubs who are very well supported so there’s always a great atmosphere at the game.

“It’s a great football club, very well supported and when things are going well in that city, the fans get behind them and you feel that momentum everywhere you go.” People want to see Newcastle doing well. It’s a great football club, very well supported and when things are going well in that city, the fans get behind them and you feel that momentum everywhere you go.

Milner joined Aston Villa from Newcastle in 2008 and three years later found himself at Manchester City, helping the club win two Premier League titles, the FA Cup and the League Cup before arriving at Liverpool on a free transfer in 2015.

The former England international is now using his vast experience to help Klopp’s side try and win this year’s title.

“I didn’t know that,” Milner admitted, when told about being the sole regular starter from Klopp’s first game – a 0-0 draw at Tottenham on October 17 2015.

“When a new manger comes in, you have to prove yourself all over again. That’s what you have to do every day and keep your standards high.

“One of my roles as one of the older guys, if not the oldest guy in the squad now, is to help the younger guys and push us on as much as I can.

“It’s been a progression, I think. The team has improved. Over the last few years, on our day, we can beat anyone. But maybe we haven’t had that consistency, and now you can see the consistency more.

“I think we have a good ability of being able to win games in different ways. If we’re not playing well, we can grind it out. We can play different styles. 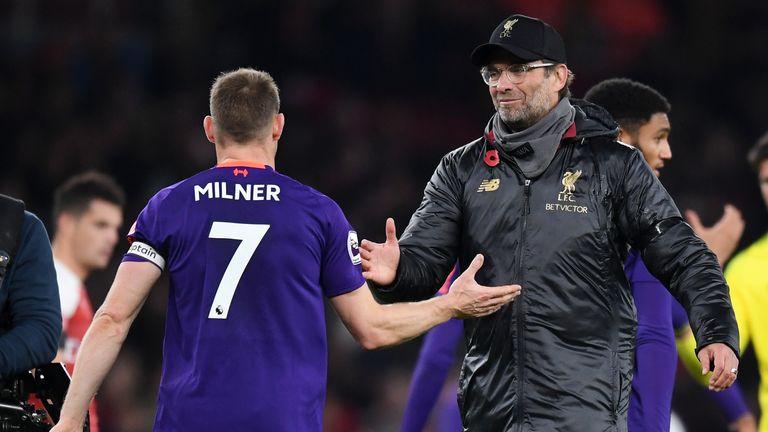 It’s been a progression, I think. The team has improved. Over the last few years, on our day, we can beat anyone. But maybe we haven’t had that consistency, and now you can see the consistency more.

“That’s us developing as a team and that’s important. In previous years, we’ve been able to play really well one week then the next week we didn’t look like the same team.

“This year, we’ve been able to nick a 1-0 and be solid at the back. That’s so important in being successful.

“I don’t think anyone set any targets in pre-season that we were desperate to win the league. But if you get through Christmas and you’re there or thereabouts, you have to be considered as challengers.

“There’s a long, long way to go but the ability we have and the position we’re in now is nice to be in. It’s a strength of this squad that no-one is getting ahead of themselves and the most important game is the next one coming up.