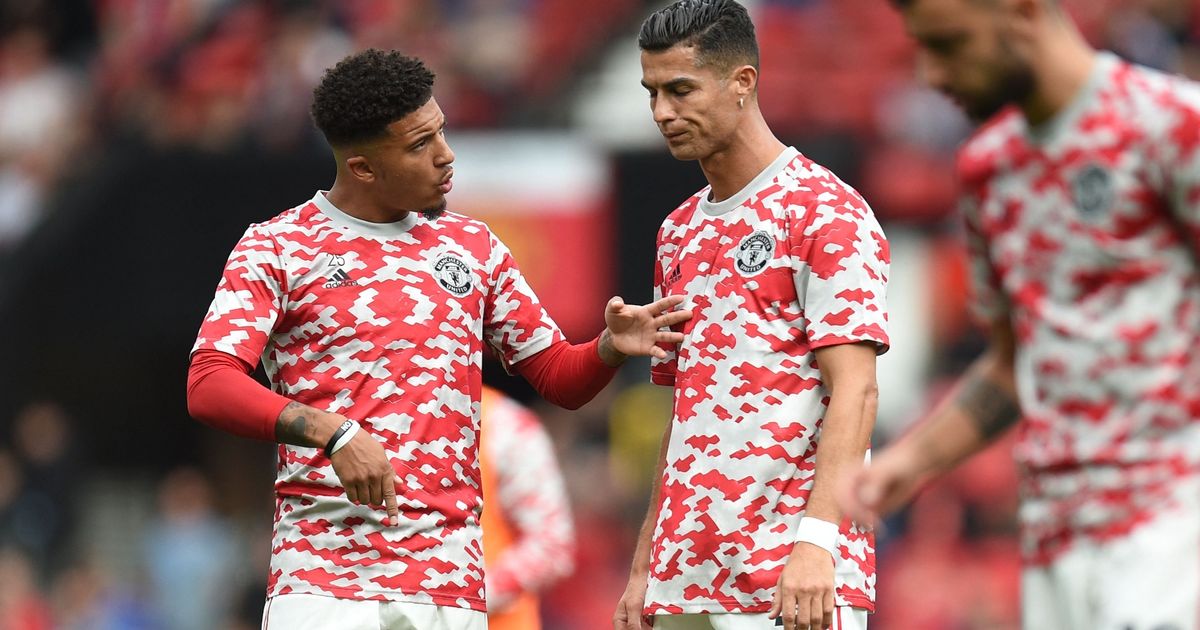 Jadon Sancho was given advice by new team-mate Cristiano Ronaldo both before and during Manchester United's 4-1 win over Newcastle United.

The Red Devils secured a comfortable home win over their visitors at Old Trafford on Saturday afternoon to reach the summit of the Premier League table.

England winger Sancho was making his first start at the Theatre of Dreams following his move to the club from Borussia Dortmund this summer, while Ronaldo bagged a brace on his second United debut.

Ahead of the match, Sancho could be seen seeking advice from the five-time Ballon d'Or winner and did so again once the match had started.

Ronaldo was the star attraction as the United players warmed up before the match, having been confirmed in the starting line-up on his United return.

As part of the pre-match preparations, Ronaldo and his fellow forwards took free-kicks at substitute goalkeeper Lee Grant to the excitement of the crowd.

After striking one dead ball shot straight at Grant and bending the ball onto the post with another, Ronaldo concluded his set-piece practice with a strike that went in off the right-hand post.

Following his efforts, Sancho could be seen asking the 36-year-old Portugal captain how he achieved the swerve on his strikes as they warmed up together.

Will the arrival of Cristiano Ronaldo deliver silverware for Manchester United this season? Let us know your thoughts in the comments section below.

Later, during the match, the former Juventus man lent further advice to his team-mate after the interval, directing the 21-year-old to move more central as Ronaldo floated out wide.

In the following attack, Sancho darted inside to pick the ball up before looking for Ronaldo, but his pass lacked the conviction to reach the debutant.

Despite still searching for his first United goal and assist, Sancho impressed on the left wing as he played 66 minutes before being replaced by Jesse Lingard.

Ronaldo had restored United's lead by this point after slotting the ball through Freddie Woodman's legs after being played in by Luke Shaw.

The movement for both goals and the turn of pace he showed to latch onto the ball for his second can teach Sancho and fellow young forward Mason Greenwood a lot.

Ole Gunnar Solskjaer will hope that Ronaldo's arrival can have as big an impact on developing talents such as the England duo as his goals will on United's league form this season.