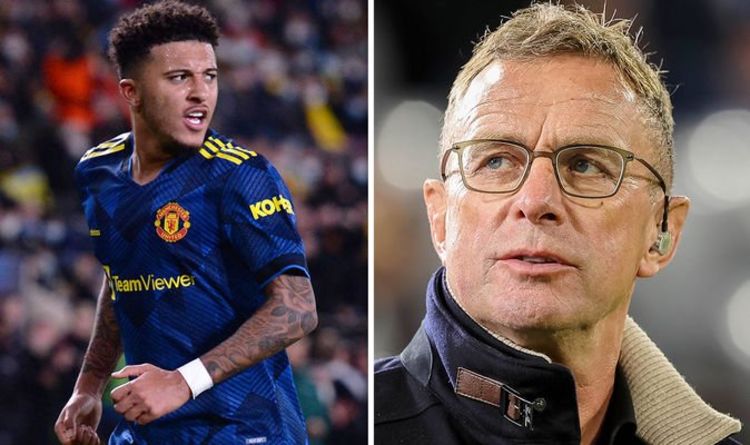 Who is Ralf Rangnick? Man Utd's interim boss in profile

Jadon Sancho will be a “real beneficiary” of Ralf Rangnick’s appointment as the Manchester United interim manager, according to Bundesliga commentator Kevin Hatchard. Rangnick is set to sign a six-month deal to be interim boss before taking up a two-year consultancy role at Old Trafford. And Sancho has been backed to thrive under the German.

Sancho joined United from Borussia Dortmund in the summer for a fee of £73million.

But it took 15 appearances for the winger to register his first goal or assist in a Red Devils shirt.

He scored the second goal in the 2-0 Champions League win over Villarreal on Tuesday.

Sancho spent over three seasons in the first team at Dortmund, so knows the German game well.

And Hatchard reckons Rangnick will be able to get the best out of the England international.

“Jadon Sancho I think will be a real beneficiary of this if it all goes through,” he told talkSPORT.

“Because he’s a guy who, you’ve got to bear in mind, has been in German football.

“I think part of the struggle at Manchester United is that maybe those instructions haven’t been as detailed or haven’t been the same – I think he’s struggled in that regard.

“I would think he’d be perfect for the way that Rangnick would want to play.

“Because he’s the kind of guy that makes decisions quickly and generally makes the right decisions.

“He thrives in that kind of broken transitional play that Rangnick wants to create.”

Hatchard says Rangnick has a set style of play but is flexible in his approach if need be.

“Generally [he plays] a back-four, but not always,” he added.

“He has played a back-three at times, but generally a back-four.

“So you do see a lot of play go through the middle, but he is flexible.

“He will tweak things and change things here and there, but what he doesn’t change is that willingness to hit at breakneck speeds and that swarming pressing – that’s not going to be negotiable either.”