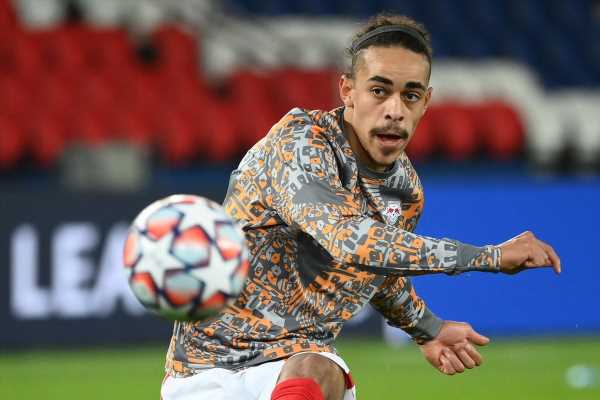 RB Leipzig take on Liverpool in the first leg of their Champions League last-16 tie tonight.

Julian Nagelsmann’s side have already tasted success against English teams this season, defeating Manchester United in the group stage fixture to secure their place in the knockout stages. Leipzig will be full of confidence, too, having reached the semi-finals of last year’s competition while currently sitting second in the Bundesliga table.

In his pre-match press conference, Naglesmann admitted that his side will only glean further belief from Liverpool’s disastrous run of form, with the Reds winning just two of their last 10 Premier League games. After a concerning collapse against Leicester last time out, Jurgen Klopp conceded that his side’s hopes of retaining the title were over, while even their place in the top four is now under threat.

Despite such a swathe of injuries, Liverpool did still finish top of Group D, though, winning four out of six games in a tricky group and Klopp is confident his side can emerge from their slump. “We will solve this challenge by playing football and fighting with all we have. That’s the plan we have,” he said at his pre-match press conference.

The match will begin at 8pm at the Puskas Arena in Hungary, where it is being played due to international travel restrictions.

The match will be broadcast live on BT Sport 2 with coverage set to begin at 7pm. BT Sport subscribers can view the game online via the BT Sport App.

James Milner is expected to miss out after suffering a hamstring injury. New centre-back Ben Davies is recovering from a knock while the game also comes too soon for Naby Keita. Fabinho is a doubt after missing the defeat against Leicester while Virgil van Dijk, Joe Gomez, Joel Matip and Diogo Jota remain long-term absentees.

Leipzig rested several of their key players at the weekend, with Marcel Sabitzer, Dayot Upamecano and Alexander Sorloth expected to return to the starting line-ups. Emil Forsberg, Konrad Laimer, Benjamin Henrichs and Dominik Szoboszlai are unlikely to feature.

Liverpool appear to be suffering from a crisis of confidence and come into this fixture still laboured by a swathe of injury problems. With their backs against the wall, the occasion should bring out a response from Klopp’s players, though. Leipzig are a brilliantly organised side and will prove tricky to break down meaning it may be hard to split the pair on a night of tactical battles. RB Leipzig 1-1 Liverpool