The A-League and W-League will enter the new year as part of a bold new structure, with their historic "unbundling" from Football Australia finally confirmed and the "shackles" on domestic soccer's potential released at long last.

More than three years after FIFA peacekeepers were sent to intervene in an ugly war between club owners and Steven Lowy's administration over the A-League's independence, Football Australia's board met on Thursday to ratify the split, which the clubs believe gives them control over their own destinies for the first time and the platform to invest the necessary sums to revive the ailing competition. 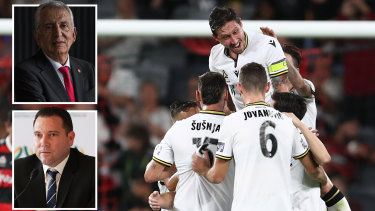 It brings to an end a lengthy, often tortuous negotiation between the two parties, although tensions persisted about the timing of the announcement and even the wording of the final press release until almost the moment it was sent.

The country's top men's and women's divisions will now be run by an organisation called Australian Professional Leagues, headed at executive level by Greg O'Rourke, who will serve as commissioner.

O'Rourke will report to an APL board consisting of five club representatives, one FA representative and three independents, one of whom, with FA's final approval, will chair the new organisation.

Western Sydney Wanderers owner and interim APL chairman Paul Lederer said it was now time for the clubs to deliver on their vision.

We're going to deliver something that is absolutely phenomenal and every bone in my body believes in it.

"Let me put it into one word: euphoric," Lederer said. "It's an absolute game-changer and a historical moment for our game.

"It's a monumental change in direction; great for the fans, great for the players, our commercial partners and excellent for the whole game. 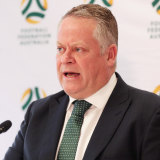 Greg O’Rourke is now the commissioner of the Australian Professional Leagues.Credit:Getty

"It's been a long road and a hell of a long negotiation, but it's well worth it. We've waited years for this; the game has been in this state for too many years to remember.

"The shackles are off. We don't have to listen to someone about how to do it, when to do it, where to do it … now we just do it. We're going to deliver something that is absolutely phenomenal and every bone in my body believes in it."

The split gives the A-League clubs the operational and commercial independence they have been fighting for, but FA will still retain significant regulatory oversight of the professional game, allowing it to set football's broader strategic agenda.

Under the agreement, FA will have the final say on the timing of the A-League and W-League seasons, expansion, contraction, club licensing criteria and how clubs will be granted access to the top domestic and international competitions – although the intention is for the APL to be involved in a meaningful consultation process on all of those points.

It means FA will have the ultimate power to implement promotion and relegation in the A-League, although there is no commitment to do so at a particular time, and work is continuing on a financially viable model for a national second division.

While club owners were initially keen on an English Premier League-style split, which would have given them a much broader sense of self-determination, the end result is similar to how the J.League and Chinese Super League function in tandem with their national federations.

"Each constituent now has defined roles and responsibilities, and the ability to make the right contribution to the growth of the professional game," FA chief executive James Johnson said.

"We have been able to create a unique model, which draws upon global best practice whilst allowing for local specificities."

But while FA and the APL are now separate, and happy for that to be the case, both organisations are likely to enter the broadcast rights market in 2021 as a partnership.

Almost every broadcast property within the Australian game is set to come up for grabs in the new year, with the A-League's contract with Fox Sports due to expire at the end of June, while international matches involving the Socceroos, Matildas and the 2023 Women's World Cup will also go to tender.

"We've had a lot of discussions with the clubs about this and the commercial discussions are going to continue," Johnson said.

"There is an absolute appetite to go into the market in a one plus one equals three scenario, where we understand that together we're going to bring in more revenues and unlock more commercial value for the whole game if we do it together.

"We'll have to co-ordinate internally about how we're talking to commercial partners, who's doing what but, on the face of it, I think you'll see a very united Australian game in the market."