So much about the W-League is different this season, but there's at least one thing that hasn't changed and probably won't any time soon: Sydney FC's dominance over their cross-town rivals.

The Sky Blues began their campaign on Wednesday with a breezy 3-0 victory over the Western Sydney Wanderers, their 14th derby win from 17 meetings and a clear indication that the competition's perennial challengers will be up there again. 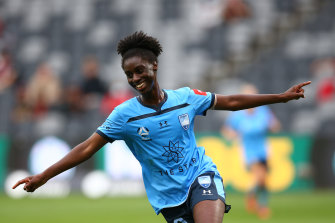 Princess Ibini celebrates one of her two goals against the Wanderers at Bankwest Stadium.Credit:Getty

Two aspiring Matildas players, Cortnee Vine and Princess Ibini, provided the goals – fittingly so, since this season will likely be defined by the emergence and development of young guns just like them.

Ibini's first of a terrific brace will be hard to top, a rasping drive from outside the box snuffing out Western Sydney's hopes just as they seemed to be finding a foothold early in the second half. Her overall performance in attack should catch the eye of incoming Matildas coach Tony Gustavsson, who is due to begin his post in the coming days.

It's been difficult to judge how this W-League campaign will pan out, with all squads ravaged by an exodus of top-line Australian internationals to European clubs and a shortage of foreigners because of coronavirus travel restrictions.

Indeed, there wasn't a single visa player on the team sheet for either side at Bankwest Stadium, and only a handful of players capped at senior level for Australia.

For Western Sydney in particular, the turnover has been damaging. Powered last year by a glut of high-profile American imports – including US national team striker Lynn Williams and Julie Dolan medallist Kristen Hamilton – only one member of their starting XI, Courtney Nevin, also played in last season's opening match.

Vine did too, but she has since traded red and black for blue. In the 27th minute, she pounced to give Sydney FC a thoroughly deserved lead, the team's pace and clever combination play having tied the hosts in knots.

The Wanderers had attempted to play out from a goal kick but coughed the ball up in a dangerous area, and within seconds of the turnover, Young Matildas striker Remy Siemsen had teed up Vine for a simple finish.

Siemsen's assist made up for her own failure to convert a golden chance from point-blank range two minutes earlier. Vine's dink over the top of Western Sydney's defence put Siemsen through one-on-one but, from a narrow angle, she tried to go over Courtney Newbon instead of around her and smacked the crossbar.

Siemsen probably should have had another much earlier in the match, from another Vine pass, but side-footed her finish directly at Newbon.

Wanderers coach Dean Heffernan withdrew star duo Georgia Yeoman-Dale and Leena Khamis at half-time in an attempt to inspire a response from his side. They resumed the second stanza in promising fashion, but Ibini's long-distance rocket on the hour mark stopped them dead in their tracks.

Ibini scored again in the 86th minute, latching onto a through ball from substitute Allira Toby and prodding it into the top-left corner. Not only did that goal seal all three points, but it also capped a thrilling, dynamic individual display in attack from a player who seems ready to take the next step in her career.