The baldest of statements ended two of the most brazen days in Anfield’s history. “Liverpool Football Club can confirm that our involvement in proposed plans to form a European Super League has been discontinued,” it said.

“In recent days, the club has received representations from various key stakeholders, both internally and externally, and we would like to thank them for their valuable contributions.”

And that was it. No contrition. No explanations. No leadership. Just 47 bland words that did not begin to address the anger and disillusion whipped up since Sunday.

Fenway Sports Group (FSG) were at the heart of the plot to create a ringfenced, cash-cow of a competition for the superclubs. This was not a revolution. It was a failed coup – an attempt by the already powerful to grab even more control. John W Henry, Liverpool’s principal owner, engaged in the enterprise without concern for the collateral damage.

Henry remained silent in his bunker in Boston before eventually emerging, chastened, on Wednesday morning, while Jurgen Klopp and his players were forced to field questions that they could not answer. An insider described the relationship between the manager and the owners as “bruised.” The players were shellshocked and started to think about legal advice. Liverpool’s most important employees were as surprised as the general public when the storm broke.

The bewilderment and dismay went way beyond the dressing-room. Non-playing staff were left in the dark. There are plenty of people around the club whose expertise and intelligence could have guided the owners away from this mess. Their advice was not sought.

One of the reasons the Americans bought the club 11 years ago – apart from it being unbelievably cheap – is FSG decided that the football industry was not very clever as a whole. They believed that they had sharper minds and better ideas. It was not quite as easy as they thought. Some of their innovations have worked well but their inability to learn from mistakes suggests naivety rather than savvy.

This is the second time in six months that Henry has found himself at the centre of a row over the future of the game. The billionaire was, along with Joel Glazer, one of the architects of Project Big Picture. When that scheme to reform the finances of domestic football was leaked, the 71-year-old remained mute in Massachusetts. He did not publicly advocate for his own ideas when they were met with resistance, rejection and mockery.

Radical solutions require leaders who can persuade doubters and generate enthusiasm. Project Big Picture was allowed to die in silence.

The same pattern has been repeated in the past 48 hours. There has been no indication that Henry has the courage of his convictions.

FSG have few friends in the game. Their chance of exercising influence at Uefa, the Premier League or the European Club Association (ECA) is non-existent. Henry has often talked in private about Liverpool making alliances across the game. In practice it never happened.

After a Premier League meeting two years ago, representatives of the ‘big six’ flew out to Malta for an ECA gathering. Five of the executives travelled together while Henry took a private jet. For reasons never explained, Liverpool’s owner never arrived on the Mediterranean island. When the future of the Champions League was being discussed, Anfield’s seat at the table was empty. The absence was noted across the continent. You do not create allies like this.

Perhaps the most mindboggling miscalculation in FSG’s strategy was expecting the supporters to accept the new age of The Super League. Henry has been made fully aware of the fan culture based around the Kop. He understands the global fame of the most iconic end in football and its value as a marketing tool. In the Anfield boardroom you do not have to buy into the Bill Shankly-inspired socialist ethos that inspires Kopites and contributes so much to their identity. You just have to know it exists and manoeuvre gently around it. There is money in mythology.

Instead, FSG have sent a message to this section of the fanbase. It is stark and ugly: everything you believe in means nothing to us.

This is dangerous for everyone concerned. The memories of the battle to oust George Gillett and Tom Hicks more than a decade ago are strong in the collective memory. Protest remains part of the culture, as the Anfield walkout over plans to raise ticket prices to £77 five years ago proved. 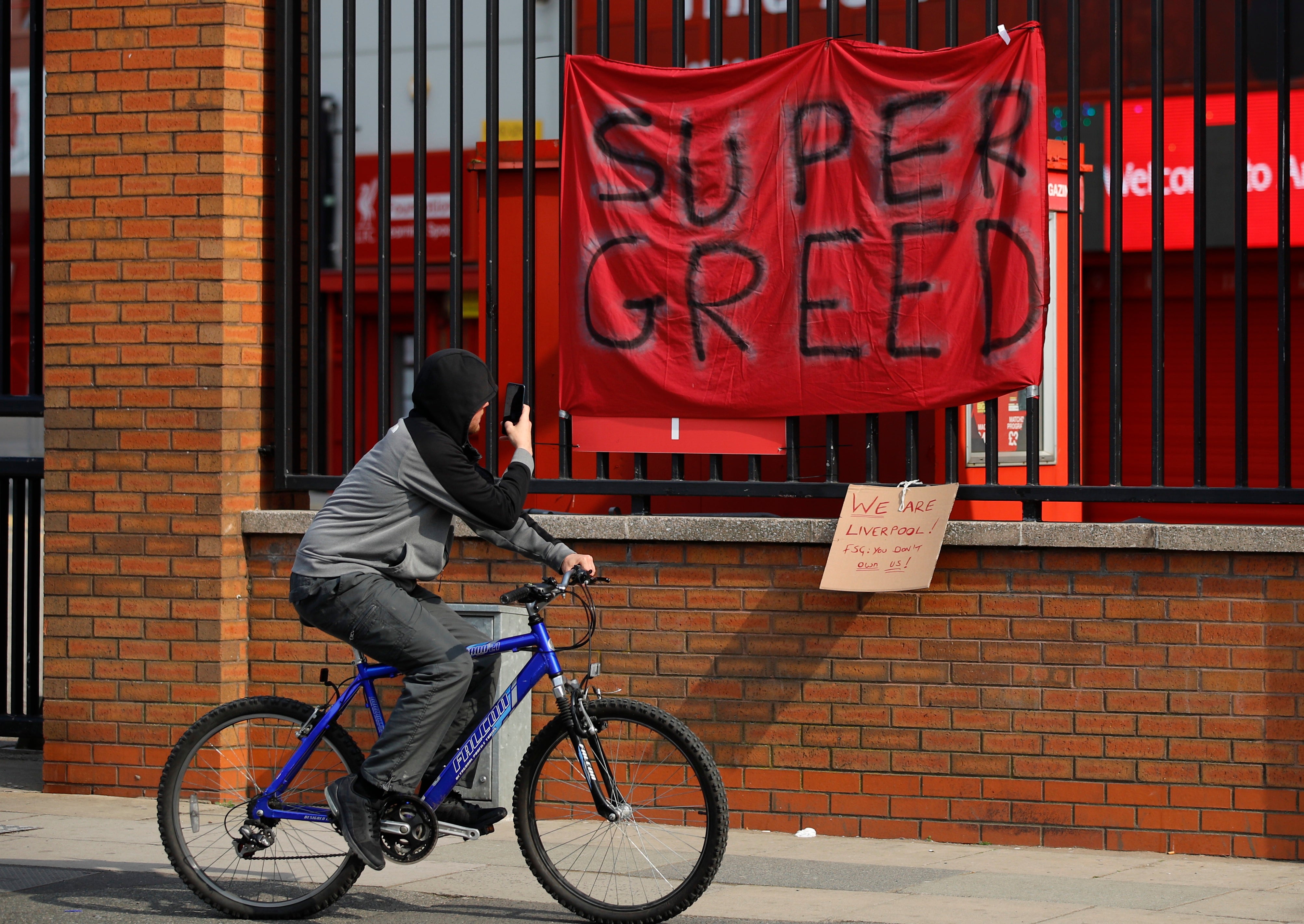 Fans have made their feelings known about the ownership

It took a long time for the more radical supporters – at the very least a substantial minority of matchgoers – to learn to trust Henry and his fellow investors. That faith has been flushed into the Mersey this week. The phrase ‘legacy fan’ is jarring for many, especially when the legacy includes the memory of Hillsborough, which is not just ancient history. Indeed, three criminal trials related to the 1989 disaster that killed 96 fans and blighted the lives of thousands more got under way in Salford this week while FSG were attempting to rip the club from its roots.

“This breakaway has damaged Liverpool more than the others [in the ‘big six’],” an insider said. “The club’s entire image is contrary to what’s happening.” Another added: “I don’t see how we come back from this.”

There are suggestions that Henry would be glad to sell after the ESL’s failure. The club has been on the trading block for at least six years. The principal owner’s big problem is that Liverpool’s value has spiralled almost tenfold since the takeover. FSG are looking for upwards of £2billion. There are very few potential buyers at that price. A likelier scenario would be a Glazer-style float on the US stock exchange.

For now, everyone is unhappy: FSG, Klopp, the players, club staff and the supporters. Failure to qualify for the Champions League will only increase the misery and make Liverpool a laughing stock.

The European Super League was a foreseeable calamity. FSG have been blinded by greed and their own arrogance. Tuesday night’s response reeked of hubris. Henry’s silence until now was the most depressingly eloquent statement the billionaire could make.