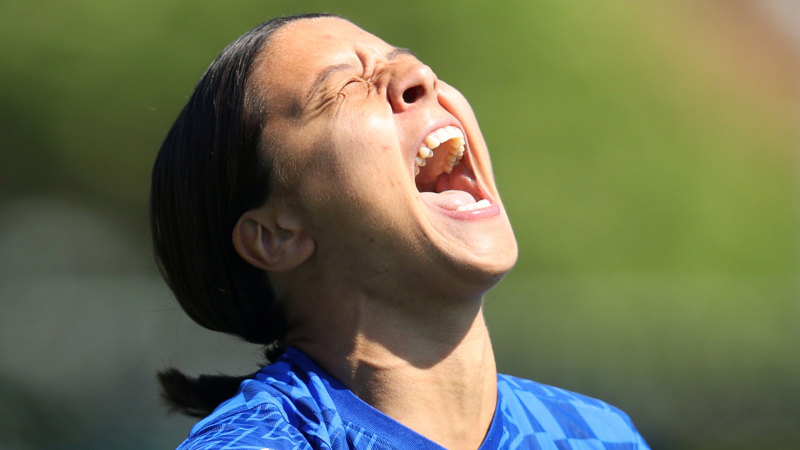 It takes a special type of striker to predict what they are going to do to an opposition team before a game and then follow it through to perfection.

That, though, is what Sam Kerr is. She is the perfect centre-forward, a human cheat code for Chelsea.

Her prophecy to teammate Erin Cuthbert on the weekend that she would score a wonder goal in Chelsea’s Women’s Super League title decider against Manchester United was a bold one, but the Australian has the genius to back it up, and duly did.

In fact, she delivered twice. Her first, an equaliser, was a sweetly struck first-time volley from the edge of the area that swerved and dipped under the crossbar.

Most players would not have even attempted the shot, let alone first time, with the ball dropping in the air. But it was the second that really highlighted Kerr’s awareness, intelligence and clinical instincts.

When a clearance by United goalkeeper Mary Earps was headed back towards the edge of the area, Kerr already knew what she was going to do. 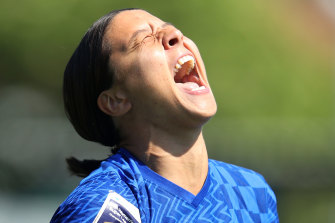 She had seen that Earps had moved out of her six-yard box to kick the ball clear and was slightly to the left of centre, 12 yards or so off her line.

In one movement, Kerr took the ball down on her chest, swivelled to get her body position at the right angle and then delicately lifted a volley over the head of the retreating Earps into the net.

She was 25 yards out when she hit it and the weight on the finish, the arc of the ball, was sublime.

“She is decisive in the main moments,” Emma Hayes, the Chelsea manager, said. “She knows she can cope with these situations and deliver when it really, really matters. Most importantly, she has joy in what she’s doing.”

At 28, Kerr is, indeed, the ultimate big-game hunter. There was the 92nd-minute winner against Aston Villa in March, two equally crucial goals in two derby wins against Tottenham, too, when Chelsea had Arsenal breathing down their necks in the WSL title race.

And now a brace to help deliver the title, just when Chelsea looked like they were wobbling.

It is Kerr’s sixth major trophy in two years in the capital, and she has now scored a remarkable 41 goals in 42 league games. They are the sort of figures Lionel Messi and Cristiano Ronaldo notched in their prime and which people said nobody would ever repeat.

Kerr has done just that in a Chelsea shirt and, if anything, she is still getting better as an all-round striker, inside and outside the box. That is why she has won the WSL golden boot.

The most incredible thing is how often she makes chances for herself. She is able to convert opportunities most players would not even recognise as such, while also making the most of the creative players around her in the wonderful side put together by Hayes. She is just as devastating in front of goal for Australia, and it was Kerr’s goals in the Olympics last summer that knocked Great Britain out in the quarter-finals.

But what makes her so good? It is not just her skill and ability, it is the way she uses her brain. She anticipates things as well as anyone. She combines that with the bravery and technique to execute what she wants to try.

As her promise to Cuthbert showed, she does not do self-doubt. In the nicest possible way, the Australian knows just how good she is. That is why she scored two wonderful goals, not one.

Australian sports stars have always tended to exude confidence in a way that more reserved and modest Britons have struggled to do. There is nothing polite about Kerr. You only have to remember the way she dealt with a male pitch invader in Chelsea’s Champions League game against Juventus.

When the stewards were slow to catch the attention seeker, Kerr bided her time and delivered a powerful, and well-placed, shoulder barge that sent him tumbling to the floor, where he was apprehended.

Not many players would also have the confidence to replicate Brandi Chastain’s iconic, shirt-off goal celebration from the 1999 World Cup final, won by the United States. Kerr did and has been lauded for the action by Chastain herself.

She is a new global superstar for the women’s game, one who “tries things that maybe others wouldn’t”, as she put it after sealing the title.

That is because most players know they are not good enough to pull them off.

Kerr is, and she knows it. And that is the secret to her success.