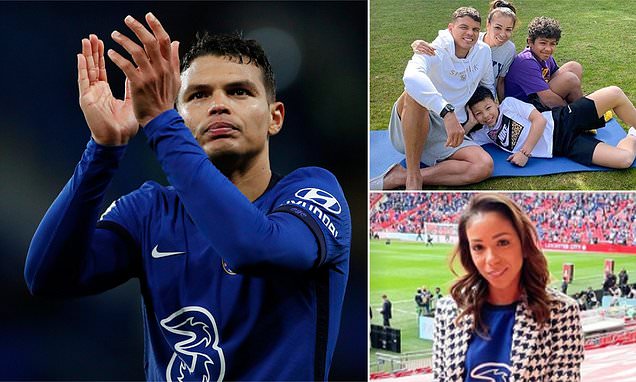 Thiago Silva’s Chelsea fanatic family: His sons idolise Mason Mount, while his wife went viral for slamming Timo Werner and chanting ‘we hate Tottenham’… and even his aunt-in-law loves a trip to Stamford Bridge!

It didn’t take long before fears emerged that Thiago Silva was going to need plenty of time to adapt to the Premier League following his disappointing debut in the 3-3 draw at West Brom in September.

Just 25 minutes into his top-flight debut, he made a critical error in possession and gifted the ball to Albion forward Callum Robinson to double their lead.

But while such a mistake so early on would have set back many a new recruit in terms of confidence, Silva – having joined on a free transfer after leaving Paris Saint-Germain – did not and has not subsequently fallen into that category. 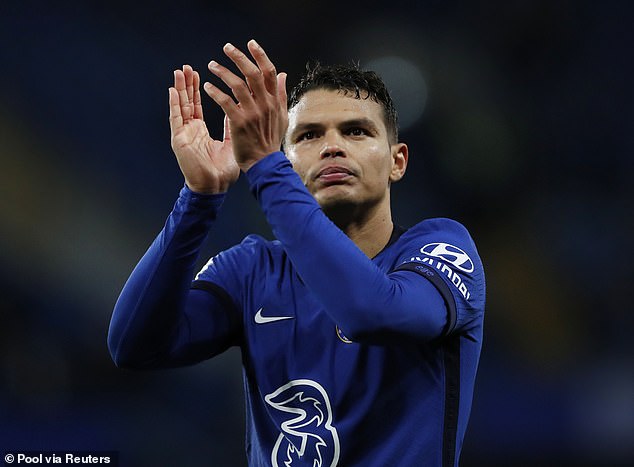 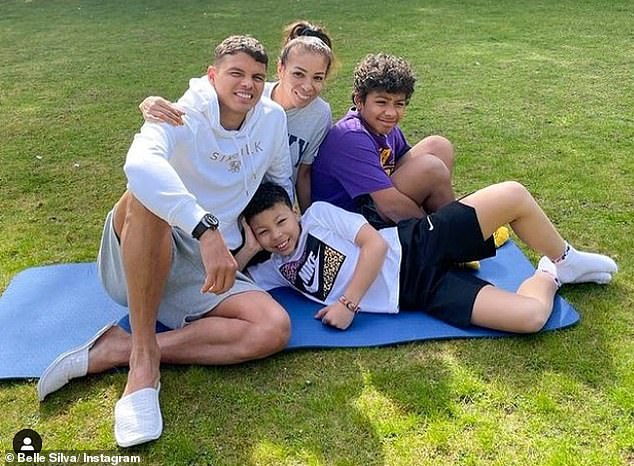 But he is not the only one to enjoy west London life, with wife Belle (centre), and sons Iago (front) and Isago (right) also embracing their new home 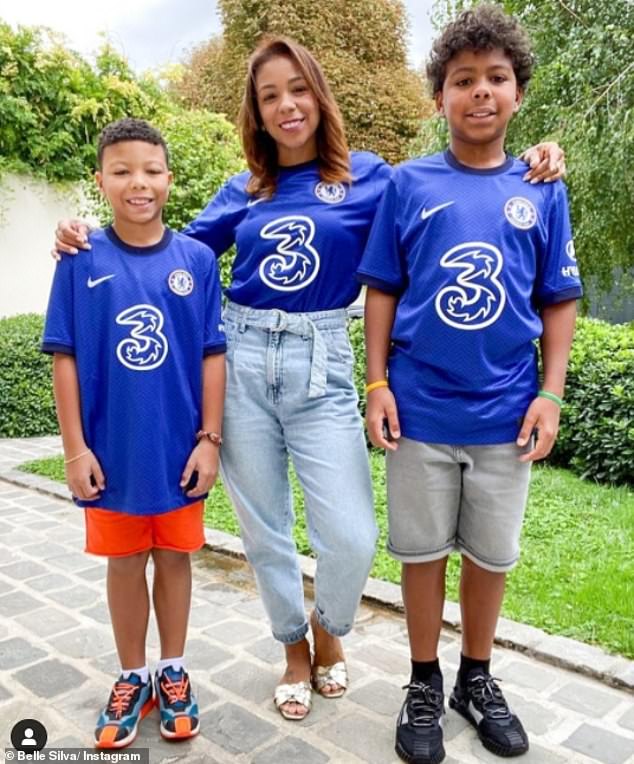 He has taken life at Stamford Bridge in his stride, making 33 appearances for the Blues this season, with the club finishing in the top four and competing in an FA Cup final.

All that remains of the club season for him before the Copa America with Brazil is the small matter of the Champions League final against Manchester City on Saturday.

A win would cap an excellent first season in English football, but he is not the only member of his family who will see it as a fitting finale to their first year embracing west London life.

His wife Isabele – or Belle – and sons Iago and Isago have fallen in love with life at Stamford Bridge too, and their involvement in club affairs, however controversial in the case of the former, has portrayed an immediate connection with the Blues and their fans.

‘Tia’ Lili Mendes – Belle’s aunt – is very close to the couple and has been snapped in Chelsea colours at the ground too, appearing eager for a bit of Chelsea love-in on social media too. 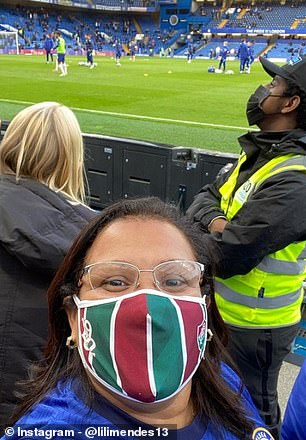 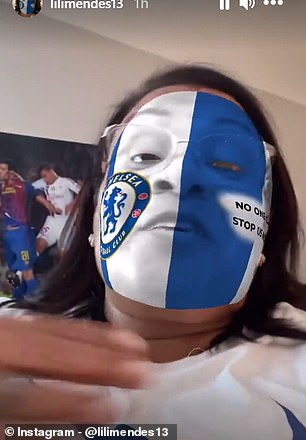 Belle Silva first came to the fanbase’s attention when she hammered £52million striker Timo Werner for missing a series of gilt-edged chances – including a smart save from Thibaut Courtois – in their draw against Real Madrid at the Estadio Alfredo di Stefano.

In a now-deleted video, she said: ‘This is karma, guys. Every team I go to there is a striker who keeps missing goals… this Werner, what is his name?’

‘We need a goal, we need to win this match but my attackers don’t want to score, I don’t know why they don’t score.’

And in a separate video shared on Twitter, there were also claims she called the striker a ‘worm’ in Portuguese. But in the second leg a week later, Belle Silva had changed tune and turned severe criticism into glowing praise.

The Germany star was in the right place at the right time to give Chelsea the lead at Stamford Bridge in a 2-0 win against Madrid, a result which sealed their place as City’s opponents in Porto on Saturday.

‘Werner, very good,’ she said after he had headed home from a yard out after Kai Havertz’s chip had hit the frame of the goal. 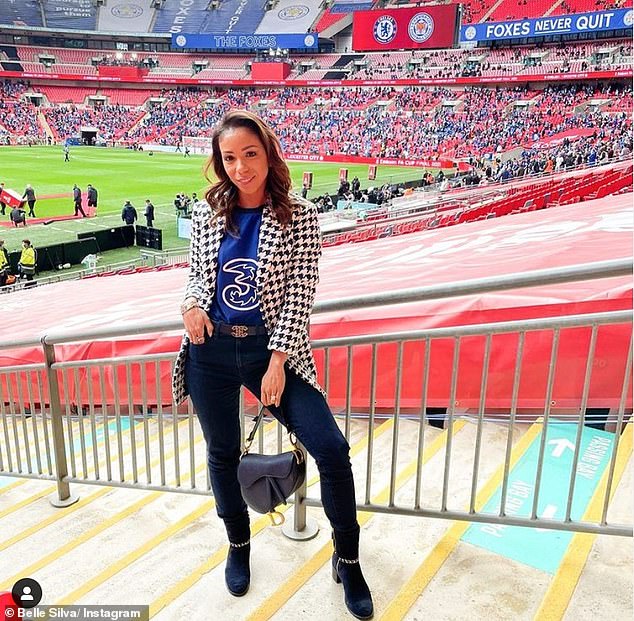 Belle was at the FA Cup final earlier this month, which Chelsea lost 1-0 against Leicester

‘That’s what I’m talking about, you know [how to score] the goal. Woo! You are the best, love you!’

With some fans now allowed back in stadiums amid the lifting of coronavirus restrictions in the UK, that has allowed for players’ family members to attend too, and Thiago Silva’s wife has not missed out on the opportunity to release more viral content.

She was one of more than 6,000 Blues fans to attend the FA Cup final defeat by Leicester at Wembley, and was at Stamford Bridge a few days later for the Premier League fixture between the two sides where Chelsea exacted revenge.

But having caused controversy with Werner prior to her U-turn, she only endeared herself to the fanbase with two bits of social media gold from that Tuesday evening.

She posted a video inside Stamford Bridge in which she said: ‘We hate Tottenham – Chelsea’, clearly demonstrating she had come to understand the rivalry between the two London clubs.

That came after a swipe at the north London side in January, when she responded to being asked to explain who Chelsea’s biggest rivals were without saying the club’s name: ‘My football team’s rival has no trophies.’

Isabele, 34, previously took aim at Andy Roberton too, chiding the Liverpool left-back for sharing a clip on TikTok of him beating Chelsea’s Jorginho with a piece of skill, saying: ‘(Ben) Chilwell (of Chelsea) is better than u dude you even lost to Southampton,’ referring to the Saints’ 1-0 win against the Reds in January

Her other online involvement against Leicester came after the fracas that broke out in the closing stages of Chelsea’s crucial 2-1 win, which saw her husband clash with Daniel Amartey, who had been videoed chucking the Chelsea pennant to the floor after beating them at Wembley.

And she supported Thiago in this confrontation, posting a grab of their clash with the caption: ‘That’s right @tsilva3 show [him] who’s boss.’ 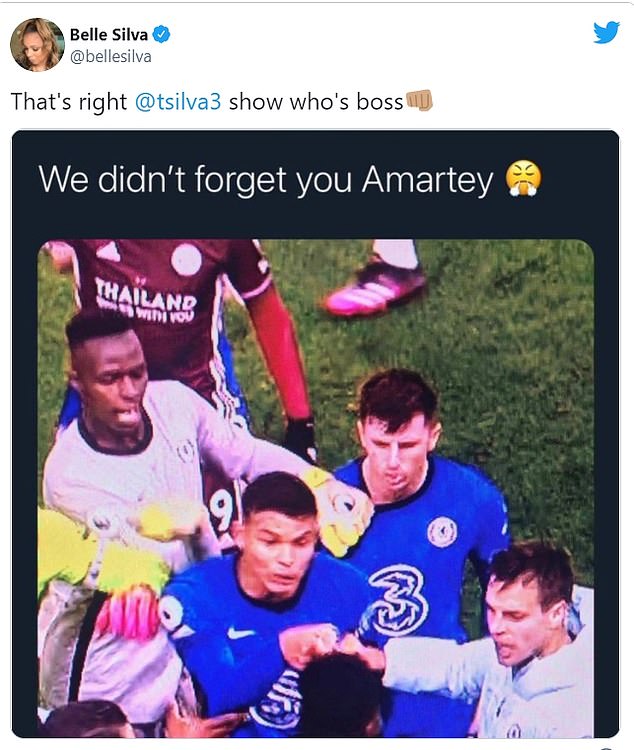 It comes as no surprise therefore – given the amount of joy she has seemingly enjoyed in the past 10 months – that she wants to stick around in west London beyond the summer, perhaps just as much as the Chelsea defender.

The Blues have the option to extend the 36-year-old’s deal by another year, and Belle showed her desire for that option to be triggered on Instagram earlier this month.

During a Q&A, she was asked: ‘Will Thiago stay at Chelsea next season?’ In reply, she said: ‘To depend on us…yes yes yes!!!!’

Responding to a fan later saying ‘tell Thiago to stay at Chelsea forever’, she replied: ‘So much yes’.

Her positive feelings about life in London could well hold plenty of sway in her husband’s decision, with regular Instagram snaps of the family spending time together showing just how close they are.

She will once again be in the stands in Porto as Chelsea attempt to win their second Champions League title following their 2011-12 success in Munich.

That victory has inspired much of the talent that has come through the club’s academy in recent years, including the likes of Mason Mount, who Thiago Silva’s son Iago named as his favourite Chelsea player aside from his father.

Iago and Isago also joined the Chelsea family in November when they began training with the academy, with their mother posting a video of Iago dressed in a Chelsea kit in a dressing room before capturing him playing out on a training pitch.

‘My favourite Chelsea player, without being my dad, is Mason Mount,’ Iago said on his mother’s Instagram account, while both brothers also picked Chelsea as the team they support. 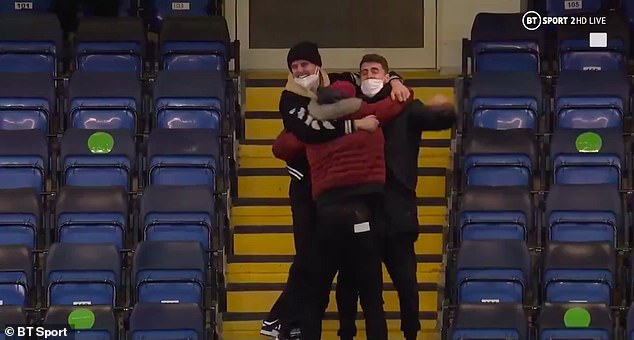 That has not meant that the main man has missed out on endearing himself to the fanbase though.

He led wild celebrations from the East Stand at Stamford Bridge and hugged Mason Mount and Jorginho after Emerson’s 94th minute goal against Atletico Madrid sealed the club’s place in the Champions League quarter-final.

He had to sit out the game through injury but was animated throughout the game and could be seen shouting instructions to Chelsea’s players on the pitch.

Then having defeated Atletico’s city rivals Real in the semi-final, he was mobbed by jubilant supporters want to get pictures with him while he was making his way in his car away from Stamford Bridge.

But instead of waiting for chants of his name to die down, Silva joined in with the joy, beeping his car horn in celebration, before driving off slowly with a supporter who had jumped onto his bonnet still lying on there. 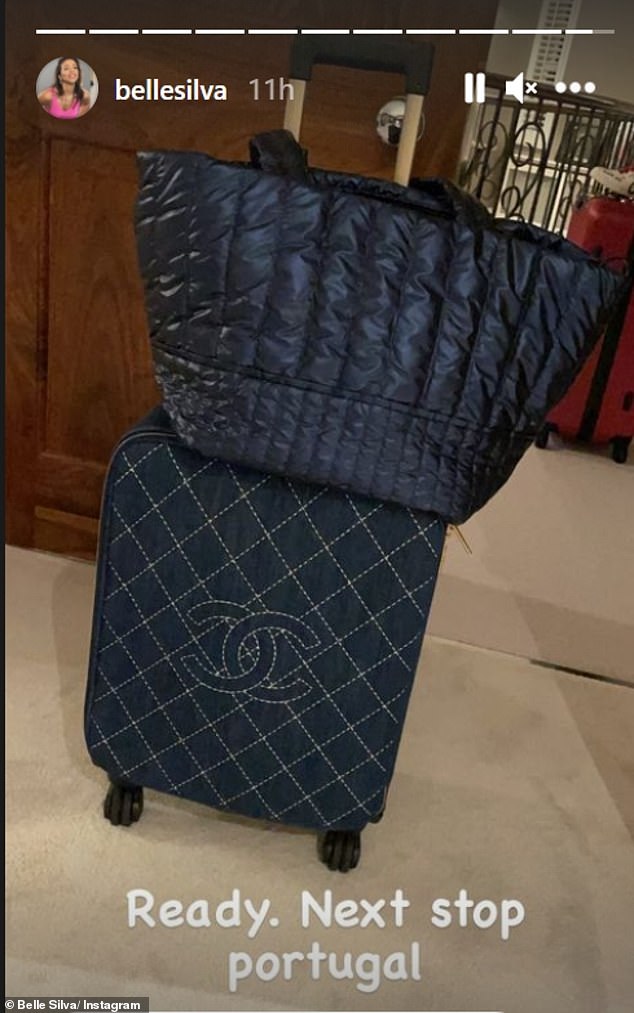 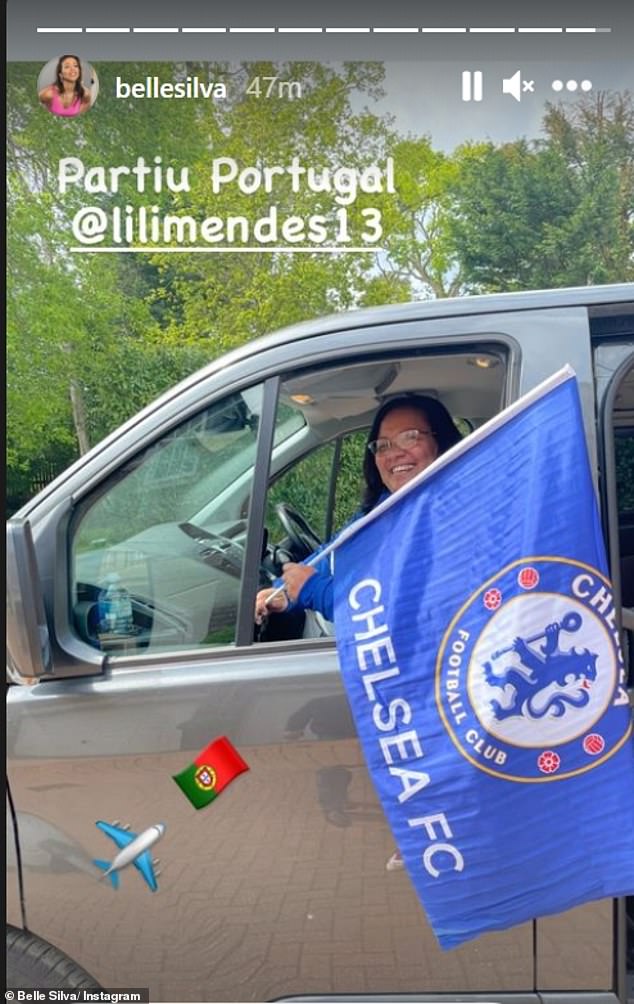 Yet Silva has also shown that he too feels the more unpleasant emotions that fans regularly experience.

Silva was rested by Thomas Tuchel for the win at Manchester City towards the end of the season, leaving him to take on the role of a nervous supporter while at home.

The match was heading for a draw until Marcos Alonso’s last-gasp winner, and Belle uploaded a video of the defender looking rather stressed while watching the match on her official Instagram account, adding ‘He watching the game always like this… concern’.

Silva has not restricted himself to just watching the men’s side either and is a regular watcher of Chelsea Women, showing his support on social media on various occasions throughout the season for the Women’s Super League champions, most noticeably in their Champions League quarter-final win against Wolfsburg in March.

A Brazil international of vast experience who has won no fewer than eight league titles in his career, Silva’s knowhow in dealing with such tense and pressurised situations as his side faced at the Etihad Stadium was one of the reasons he was brought to the club.

And he has clearly taken it upon himself to guide the younger players at Chelsea through this season.

Speaking to BBC Sport in February, right-back Reece James, 21, said: ‘I think, this season, Thiago Silva has probably influenced my career the most so far, just because he is well experienced and played at the very top of the game for the last 15 years.

‘He has taken me under his wing, coached me and told me where I need to do better and where I am doing well.’

Speaking ahead of a Champions League game against Rennes early in the season, James’ fellow England international Mount, 22, stated: ‘Thiago Silva has been through a lot and been at the top of the game for a long time.

‘You can learn so much experience from them by just talking to him for five minutes here and there. 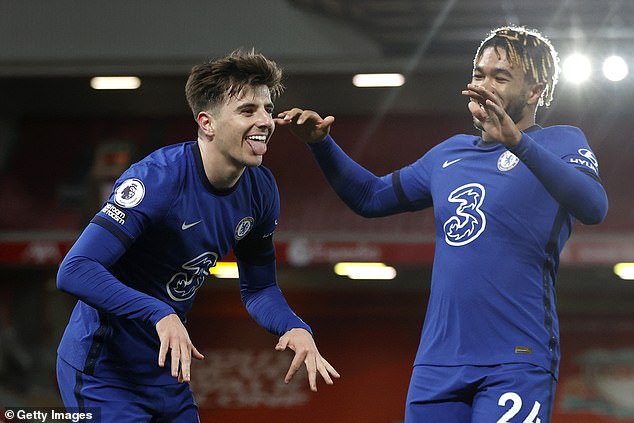 ‘He is a brilliant player and when they come in it really helps young players coming through and gives us a lot of experience.’

That guidance was critical for 19-year-old midfielder Billy Gilmour, who made his first league start under Tuchel in the win against Fulham at the start of this month.

As Chelsea defended a free-kick in their eventual 2-0 victory, the Brazilian – who is still working on his English language skills – screamed ‘Here!’ at the Scot.

When Gilmour moved into the position Silva wanted him in, the Brazilian shouted a hearty ‘Good!’

Trying to help the youngsters is one thing, but going out of your way to show your appreciation for legends of the club is a completely different matter. 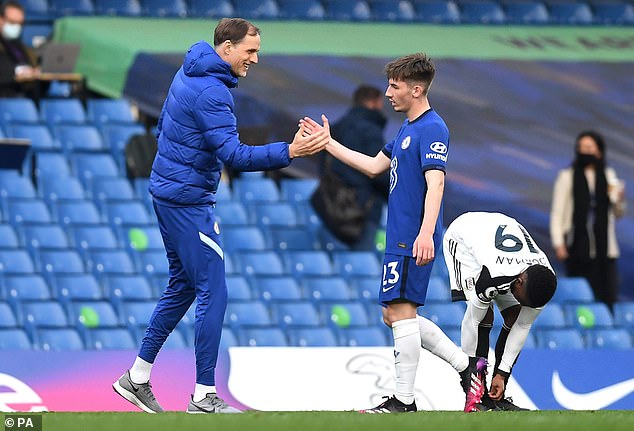 But that is what Thiago Silva did on the final day of the Premier League season, handing over his match-worn top to John Terry, who took to social media to show his appreciation.

He posted a picture of the Brazil international’s shirt and captioned it: ‘What a player this man is. Great to see you mate. Legend.’

That legendary status will increase by a significant amount if he manages to guide Chelsea to victory against Pep Guardiola’s Premier League and treble-seeking side in Portugal.

But one thing that is for sure is that his family will be behind him all the way and have little desire to breakup their growing relationship with Chelsea any time soon, regardless of the result. 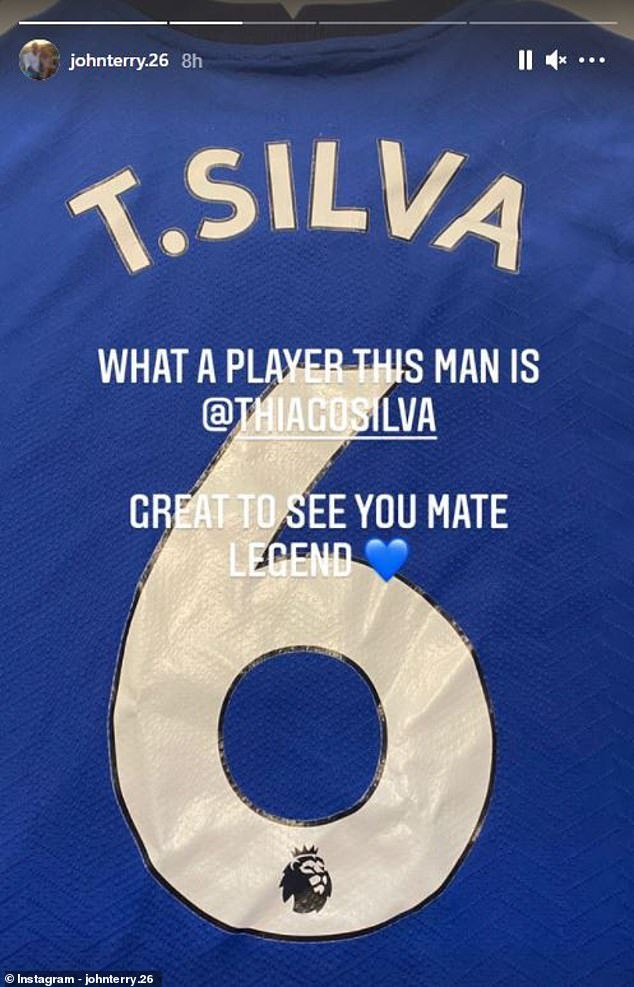