Melbourne Victory coach Jeff Hopkins is resigned to the fact his team will not be able to repeat their W-League Premiers Plate heroics of last season.

But the 2018-19 W-League coach of the year is optimistic that Victory will be able to maintain their steady improvement in recent weeks and kick start a run to a finals berth as they rediscover the fluidity and momentum that made them the top team during last season's home and away rounds. 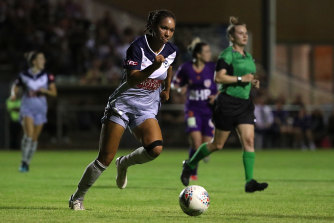 But Victory are only two points behind Brisbane and Canberra (both on 10 points), who lie fourth and fifth, and have a game in hand.

Win that and they could leapfrog the two teams with whom they look to be in a battle for fourth, the last finals berth.

Hopkins acknowledges that things began slowly for his side – a difficult draw plus an onerous journey to play in the inaugural women's Asian Champions League made it difficult to find rhythm.

But as they approach Sunday's clash with the struggling Newcastle Jets (who have picked up only four points from six matches this season) the coach is confident that his side will start to produce its best, having had a last-start win in Perth.

"We had a slow start, a tough start. We are starting to build a little bit of momentum now. I am hoping that the performances over the last four games, which have been really good, will keep getting better and better," he said.

"We made a lot of changes to the squad and the side [has had to] adapt and adjust the way we played. Players are getting used to new players and playing a new system.

"We can definitely see [improvement] from game to game.

"You can see now each game we are looking a little more cohesive and fluid as a team.

"Now we are starting to play with wing backs, it's about getting a balance about how they start and it's taking a little bit of time."

While Victory learned some harsh truths in their foray into Asia, they have been able to put some of that knowledge into practice.

"It was tough physically for us. We did learn a few lessons over there but it made the start of the season tough for us coming back and playing Western Sydney straight away," Hopkins said.

"Some of the lessons we learned, being able to handle the ball in tighter areas, keeping possession, moving the ball quicker, means it's changed the way we train a bit. I think our improvement is part of the experience there."