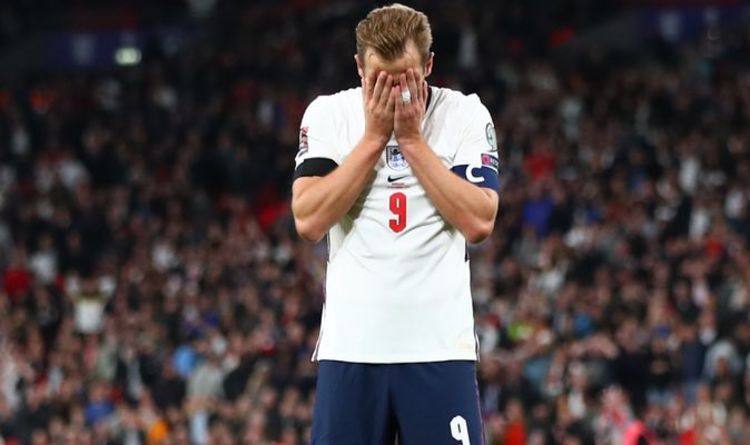 Harry Kane endured yet another frustrating night on Tuesday as England stumbled to an underwhelming 1-1 draw with Hungary at Wembley. The Tottenham striker once again failed to make much of an impression on the game, and to add insult to injury he was taken off by Gareth Southgate with 15 minutes left to play.

Kane has looked a shadow of his usual self in the last few months, with some suggesting that the prolonged transfer saga which saw him linked with Manchester City all summer has had an adverse effect on his form.

The 28-year-old has not been able to grab games by the scruff of the neck as he normally does, and has managed just four goals for Spurs so far in the current campaign – all of which have come in the Europa Conference League and Carabao Cup.

His body language also does not look great, and his run of six Premier League matches without a goal is his worst spell in the competition since 2015.

But it is not just on the pitch where there are worries.

As pointed out in The Independent, Kane did not do any media duties during the latest international break – something which is highly unusual for any England captain, let alone Kane, who is normally more than happy to speak to the press when asked to do so.

While it may well simply be that other players were preferred to face questions over Kane on this occasion, it could also hint that the man himself is not at his happiest, and would prefer to keep as low a profile as possible.

Speaking after the Hungary game, Three Lions manager Gareth Southgate was typically diplomatic, and refused to single out Kane for criticism, saying: “I just think tonight we didn’t play as well as a team as we should and we can.

“In the end we need to refresh that and get fresh legs into the game. With any of the forward players there’s always a story when we take them off.

“They’re big players. We have to have a team able to do that. We felt it was the right thing at the time. I don’t think singling out any players is fair because we’re all responsible for that.”

While Southgate appears calm on the outside, on the inside he will surely be worried about his talismanic skipper – especially with the Qatar World Cup now just over one year away.

But ultimately there is little he can do, and it is down to Kane to get himself out of this worrying funk.

Of course, Kane has had his critics in the past, and every time his performances have been scrutinised he has come roaring back in spectacular fashion.

It could well be that in a few weeks he is back to his very best, and it would still be no surprise to see him among the top scorers come the end of the season.

Nevertheless, this is arguably the most subdued we have ever seen Kane, and he will be under the spotlight once again when Spurs take on Newcastle this weekend.

If he fails to sparkle once again at St James’ Park, the questions over him will only continue to grow.