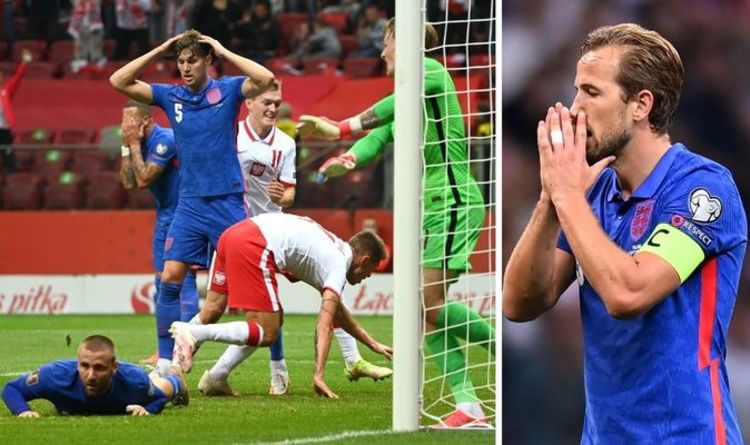 Harry Kane was not prepared to dwell on the frustration of throwing away all three points in stoppage time as England were held to a 1-1 draw in Poland. Instead, the England captain was determined to point to the wider picture and that is World Cup qualification.

The Three Lions were on course to make it six wins from six in Warsaw thanks to Kane’s 32-yard long-rang effort but the host’s never-say-die attitude earned them a valuable point at the death.

Kyle Walker’s small lapse in concentration was ruthless exposed by Poland, who managed to draw level courtesy of a header from Damian Szymanski.

Yet Euro 2020 finalists England are still five points clear in Group I and Kane believes Gareth Southgate’s side must focus on the table as opposed to their inability to see the game out.

“Obviously it’s a tough one to take right at the end there,” he told ITV’s Gabriel Clark.

“I thought we handled the game really well, not an easy place to come and another tough game.

“We got ourselves and then we were seeing the game out well.

“Away from home, the pressure build and they put a good cross in and scored a good header. That’s football.

When quizzed as to whether England’s defence could have done more to stop the equaliser, Kane was adamant the ball simply fell Poland’s way.

He added: “Look, I think there was a couple rebounds and a couple second balls and it just fell their way.

“They’ve put in a good ball and scored and that’s football.

“We’ll learn from it, watch it back and prepare for the next camp.

“Like I said, there’s been two tough away games in this camp, we are still five points clear and we are still in a great position.”