‘I’ve never gone out to hurt anybody’: Hamza Choudhury’s tackle on Newcastle’s Matt Ritchie caused a storm – but he insists he was, as always, only after the ball

Sometimes, it takes more than a Premier League appearance or two to make you feel you belong. Sometimes, you need a little help.

For Leicester’s Hamza Choudhury, the nudge in the right direction came from a new team-mate whose boots he used to clean. Jamie Vardy was a good tipper, apparently.

‘One of the best,’ smiles Choudhury, a Leicester academy graduate. ‘And he gave me a few pairs of signed boots as well.’ 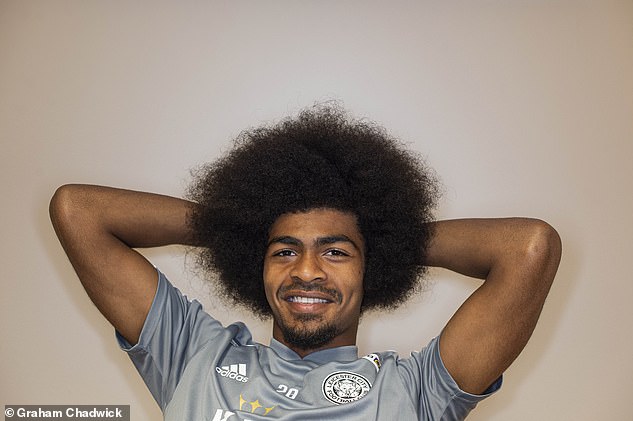 But it was after the young midfielder had played just seven minutes as a substitute in the Premier League at Tottenham two years ago that Vardy decided to intervene.

‘I had just played my second game and he just walked into our reserve team dressing room one day, took all my stuff off its peg and carried it in to the first-team changing room,’ Choudhury says.

‘He basically took me in and was like, ‘You are one of us now’.

‘I didn’t think I had earned it. But he just grabbed my clothes and walked off. That makes it easy. Otherwise you are thinking, ‘When am I going in? When should I do it?’

‘Then you go out to training and all of a sudden you are there as a first-team player rather than them being the ones you are always looking up to and wanting to be. So, yeah, I haven’t forgotten that.’ 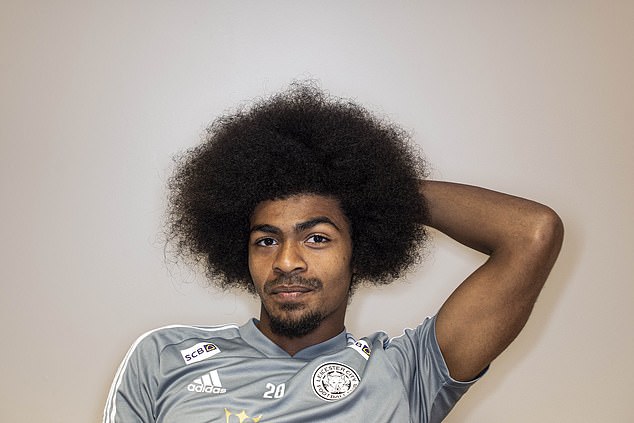 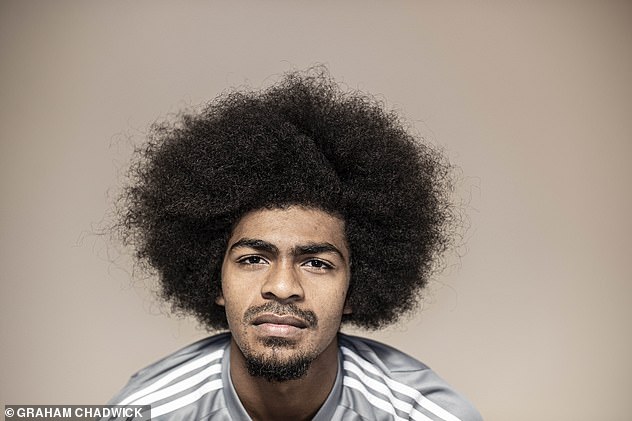 At Leicester, they have known about Choudhury’s potential for years. Now 21, he has been at the club since he was seven. As a kid, he was so fast and strong that coaches occasionally had to apologise to some of the watching parents.

‘He had incredible physical gifts, the like of which I had never seen at that age,’ a Leicester academy source said. ‘He was either going to become an England central midfielder or an England scrum-half.’

Choudhury is no longer Leicester’s secret. Established in Brendan Rodgers’ progressive first team, he will be in the line-up when Leicester face Manchester United at Old Trafford on Saturday. A holding midfielder, Choudhury is lithe, quick and instinctively competitive. Rodgers wants him to pass the ball better and that is the immediate challenge. ‘You have to in this team,’ Choudhury says.

With his wonderfully distinctive hair, Choudhury would not win many games of hide and seek. But it’s not his afro that makes him stand out.

Choudhury reads the game beautifully and moves across the ground with grace. Equally, there is a sureness about his play that is noticeable for a player who has started only 14 games for the club.

‘I do get pre-match nerves but once the whistle goes it’s just football. It’s what I love doing. Weirdly, Leicester seem to do well against the top six. It’s become our thing and against the top sides it seems to make me feel comfortable, too.

‘Sometimes I am standing in the tunnel with famous players standing next to me and I am like, ‘Oh my god, I have really arrived now’.

‘It motivates me. The better the player, the more switched on I have to be. They are not just physically and technically good, they are so clever and aware. It’s a great challenge for me.’

When we meet, Choudhury has just returned from a trip to Dubai with his girlfriend Olivia and one-year-old daughter. It might have been a good time to get away.

Before the international break, he was strongly criticised by Newcastle manager Steve Bruce for a tackle on Matt Ritchie. 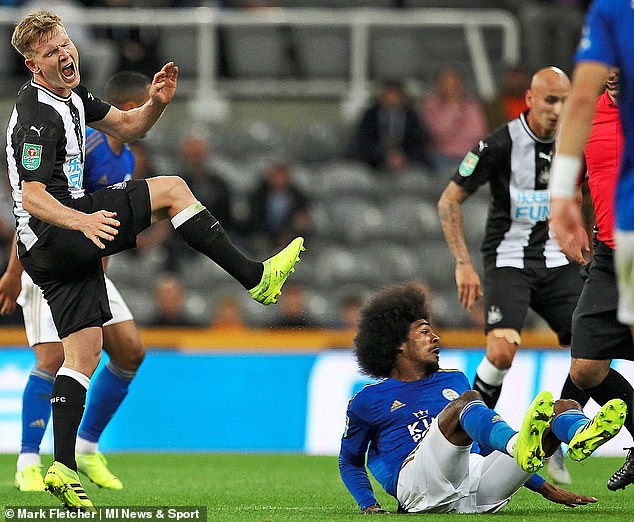 ‘I didn’t agree with the comments he made,’ says Choudhury. ‘They were unnecessary, talking about breaking legs. It wasn’t that kind of tackle. It’s just that his team lost and he can look elsewhere and talk about the tackle and not have to talk about losing the game.’

If that sounds as though Choudhury doesn’t care about the issue, then don’t be fooled. He has taken the time to watch the incident several times on TV, just as he did the tackle that earned him a red card for England Under 21s against France in the European Championship in July.

Choudhury’s speed over short distances is exceptional. Rodgers has already detailed it as one of his player’s prime assets. But with that speed — with that adrenaline-loaded dash towards a tackle — must come control and an ability to make the correct decisions.

Choudhury has been reminded of that by his manager over the last fortnight, but he says he knows it already. ‘I have watched them a lot, especially since the England one,’ he nods.

‘I would probably do the same thing again, but just in a different way. I was probably running a bit too quickly to make that tackle for England. The ball was there to be won and I remember thinking, ‘Yes, I am gonna win it and we can recuperate’.

‘But it didn’t quite work out like that. I do think about how I can change, especially if, like the one at Newcastle, I have hurt someone. 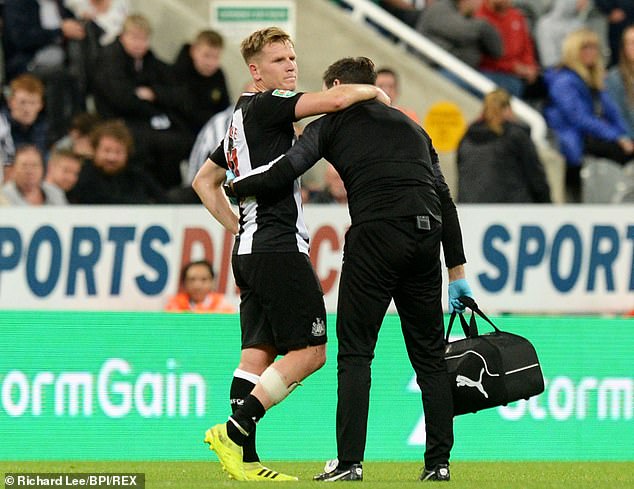 ‘How can I avoid getting into those situations? The answer is ‘experience’. I need to know when you can and when you can’t. I have never gone out to hurt anybody. Never. I want to win the ball cleanly and make a recovery for the team.

‘What we do in our position in the team comes with a risk. There is such a fine line it can either be — as the gaffer said — a world-class tackle or you can get sent off.

‘It’s not kicking out or being malicious. You are trying to play the game. But it’s such a fine line that it can go either way. You just need to learn, don’t you?’

Watching both tackles back this week, it is clear they are very different. His challenge against France was late and clumsy.

The Newcastle one was more open to interpretation. ‘I think if you watch any tackle in slow motion it is going to look nasty as it’s a contact sport,’ he reasons.

‘But the England one really upset me. It was my first time playing for England competitively. I wanted to make my family proud and England proud. I put that pressure on myself and when you feel like you have let people down it’s not nice. We lost the game and it was partially my fault. It isn’t going to make you feel good is it?’

Choudhury has not been selected for a full England squad yet but is on the radar of manager Gareth Southgate. The issue is particularly pertinent because an Asian player has not yet represented England.

Whether he likes it or not, this lad from Loughborough is a trailblazer. He is not the first British Asian to play professionally in this country, but there haven’t been many. 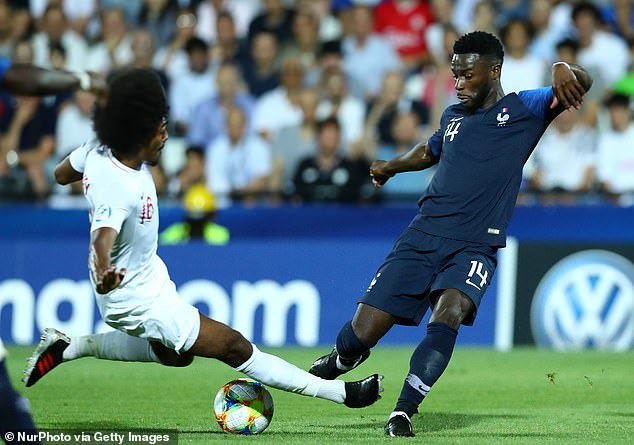 Born to a Bangladeshi mother and a father from the Caribbean, Choudhury wears the cloak of role model a little uncertainly. He understands the significance but the uncertainty comes from a natural modesty. He is, after all, still a very young man.

‘I don’t wake up thinking I am a role model,’ he says. ‘I just concentrate on my football and my family and hopefully I can carry on doing OK. Maybe the more successful I become and the better I get, the more of a role model I can be. But I haven’t done that much yet have I?’ 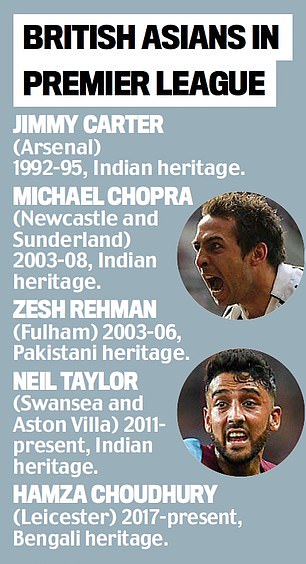 It is easy to warm to Choudhury. As a youngster, he was told by coaches that most kids don’t make it. That upset his uncle, but not him. He used to train on a Saturday morning and then walk the two miles to the King Power to watch the first team.

‘The numbers against making it in this game are scary for anyone,’ he says. ‘But I always had that mindset of making it. At school the teachers were always banging on about having a back-up plan, but I would be in science thinking, ‘I want to go home as I have football later’. Maybe that subconsciously motivated me as I knew I had to put myself in that situation and succeed.’

If you are a young Asian footballer, the odds against breaking through are even higher. A BBC film featured young players who said they felt ‘isolated’ and ‘unwanted’ by the game.

Choudhury believes he has been lucky. He was racially abused by another player’s parent when he was 10 but says it was an isolated incident.

‘Leicester is a brilliant, multi-cultural city and this is a homely club. You have to put yourself in the position to try rather than to come away having made an excuse or assuming bad stuff will happen.

‘I guess a lot of the young people have had to deal with stuff and they don’t want their friends and family to feel like that, so it puts them off. But football has changed and has come a long way with racism and so I think you shouldn’t stop. 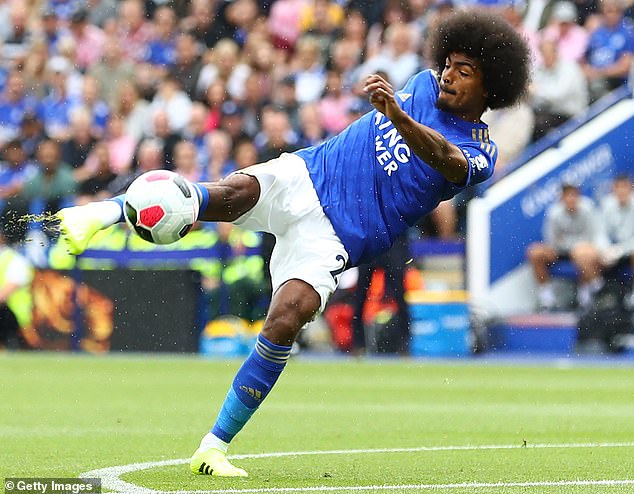 Whether Choudhury likes it or not, this lad from Loughborough is a trailblazer in football

‘It’s hard for me to speak on everybody’s behalf but for me it makes me want it more and to fight harder and be stronger. To not give yourself a chance and to honestly believe that the barriers will stop you succeeding, you are just letting those other people win.’

When it is put to Choudhury that his own rise to prominence is a reason for young Asians not to give up, he pauses. ‘I have never held myself as highly as that, but when you say it like that then, yeah, hopefully that is right and hopefully I can be a reason for people to try.’

A spell on loan at Burton toughened Choudhury up. Playing away at Port Vale, an opponent tried an unusual way to intimidate him. ‘There was a tackle and this guy was on the floor with me,’ he laughs. ‘He was suddenly pulling my hair. I was like, ‘Why would you do that?’

‘When I was a kid my mum hated it and was always telling me to get it cut. I don’t ever see myself getting it cut now.’

‘This position is so much more than just being a destroyer and playing it simple,’ Choudhury says. ‘You are the controller.

‘Play it quick, slow it down. Win the ball back and make last-ditch tackles and stuff. So it’s a very important role. I just love it.’

Mourinho says top four with Tottenham would be his BIGGEST achievement

Sportsmail looks at some of the most significant rematches in boxing