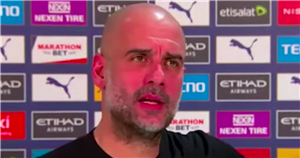 Pep Guardiola has reassured Jurgen Klopp that "sometimes it's good to lose" amid Liverpool's stuttering defence of their Premier League title.

The Reds slumped to their third straight defeat away at Leicester on Saturday, somehow losing the game 3-1 despite initially taking the lead through Mohamed Salah with 23 minutes remaining.

Klopp saw his side fall apart in a calamitous seven-minute period which has left them 13 points behind leaders Manchester City and, by his own admission, all but ended their hopes of retaining the title.

Rumours began circulating on social media over the weekend that the Liverpool boss, whose mother passed away last week, could take a step back from management and resign from his post.

However, such speculation was shut down by Klopp at his pre-match press conference ahead of their Champions League clash with RB Leipzig on Tuesday, where he insisted he doesn't need a break.

And Guardiola has now leapt to his rival's defence, insisting it can sometimes be a blessing in disguise to lose because it makes you realise how difficult the challenge is.

When asked if he has some sympathy for Klopp, the City manager said: "A lot. What he produces in world football is exceptional.

"I say many times in previous seasons. His philosophy makes football attractive for all spectators. For world football, there's no doubts.

"We all have good moments and bad moments, no manager can sustain seasons and seasons to win. It would be boring.

"Sometimes you have to lose, I speak personally, sometimes it's good to lose to realise how difficult it is. When you come back and win games you get more credit."

Liverpool are gearing up for a crucial showdown with Leipzig in the last-16 of the Champions League on Tuesday night, which will take place in Hungary due to Covid-19 travel restrictions.

Unlike the Premier League champions, Leipzig have been in fine form in Germany's top-flight of late, recording three straights wins to keep pace with Bayern Munich at the top of the table.

Liverpool will hope to claim a big victory in the first leg at the Puskas Arena, Budapest, and turn their season around.