Graham Potter has told Brighton’s strikers to go out and prove he does not need to go out and spend and buy a “silver bullet” solution to his team’s goalscoring problems.

Albion netted only 39 goals last season as they finished 15th in the Premier League table, only four teams scoring fewer.

Potter has seen veteran striker Glenn Murray depart for Watford this summer, and so far been foiled in bids to land forwards in the transfer market, with Celtic’s Odsonne Eduard the latest target to look out of reach, at £40million.

But the Albion manager intends to help the forwards he has, like Frenchman Neal Maupay, top scorer with ten goals in his first season in the top flight last year, improve their tallies.

Potter, whose team open their campaign at home to Chelsea on Monday, said: “I look to the likes of Neal, Aaron Connolly, Leandro Trossard, and Steven Alzate. 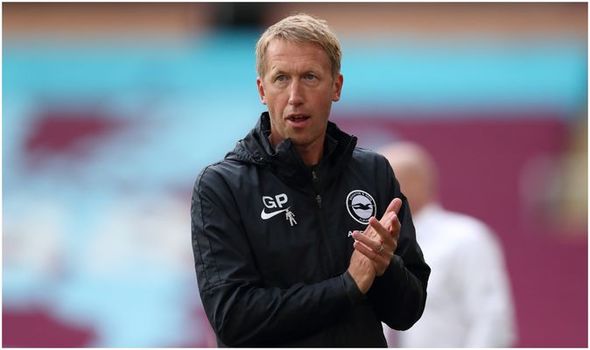 “If you look at their goals last year, they could improve those tallies.

“Rather than look for the silver bullet that is out there, you think ‘Can we improve those guys and help them score more?’

“Three or four of them were making their first starts in the Premier League. So you would like to think that they could take a step forward, and that might mean that the goals could come from within.

“They will be better for the experience. Of course we want to attack better as a team, we want to score more goals and win more games. That’s the challenge for us. We look forward to it. The boys understand that’s the next step we have to take – without losing our defensive stability. “

But at the same time, Potter insisted, Brighton are still looking for another striker to help Maupay.

He said: “You are always looking to see if there is someone who can bring something extra to your group.

“While the window is open you have a responsibility to keep looking at players, you never know.”

Potter is also on the look out for a left-back, and Brighton have made enquiries for Lazio’s Jordan Lukaku – the 26-year-old younger brother of Inter Milan’s Romelu.