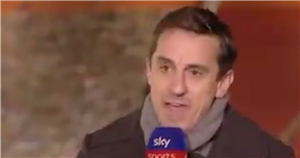 Pogba was left on the bench for a number of games amid questions over his future though has become a regular for the Red Devils in recent weeks.

He is playing further left than before with Bruno Fernandes impressing in a more central position.

And Neville believes it’s the only way that Solskjaer can get the best out of his two creative stars.

Speaking on Sky Sports, Neville said: "I have to say that it became evident probably two months ago that if Paul Pogba was going to play a lot of games for Manchester United this season he was going to have to play wide on the left.

“Because the three in midfield…Ole really only trusts McTominay, Fred, Matic. Two sitting and he trusts Bruno in front.

“So Paul Pogba is only going to play in that one in front. I think in the big games he's always going to play two of those defensive ones, so he had to be on the left.

"And it started out a little bit scabby on that left hand side but he's now starting to get a bit of freedom.

“And I like him when he's in and around the 18-yard-box, he impacts matches and I think tonight he can become a massive player for United this season."

Though the World Cup winner recently said: “I give my best to be on the pitch, to play and give my best for the team.

"I can play left, right, anywhere. I just give all I've got just to help the team the most I can.”