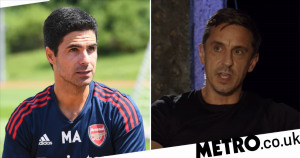 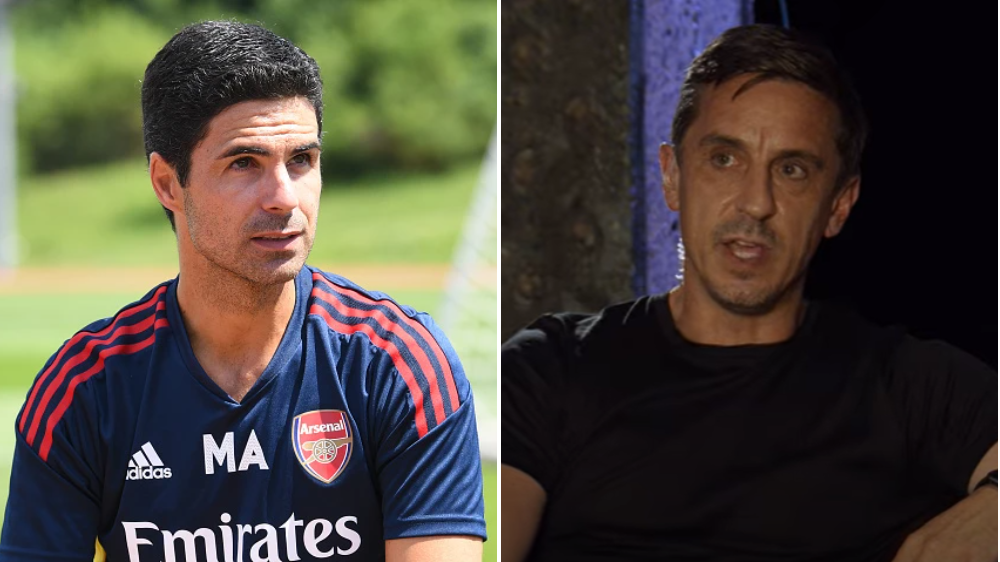 Manchester United legend Gary Neville has revealed his concerns over Arsenal’s squad and ‘inexperienced’ manager Mikel Arteta ahead of the new season.

Arteta has spent two-and-a-half turbulent years in charge of Arsenal, with his Gunners side winning the FA Cup in 2020 but flattering to deceive in the Premier League and Europe.

Arsenal looked on course to finish fourth last season and secure a return to the Champions League, but Arteta’s team faltered towards the end of the campaign and saw north London rivals Tottenham pinch the final top-four spot.

Neville hopes those at Arsenal ‘get behind’ Arteta this season but admits he still has doubts about the 40-year-old, who took on his first managerial role when he was appointed as Unai Emery’s replacement.

Speaking on The Overlap – in partnership with Sky Bet – Neville said: ‘I actually hope the fans get behind Mikel Arteta this season, I genuinely do.

‘I just worry about the experience in terms of young manager. To be fair, it’s not unfounded, the evidence is there! Last season, Arsenal should have finished in the top four.

‘In that game, Spurs’ experience on that night it was alarming how naïve Arsenal were and how short they were. My concern is just purely around that.’

Arsenal have enjoyed another productive summer transfer window, bringing the likes of Gabriel Jesus, Oleksandr Zinchenko and Fabio Vieira to the Emirates.

But Neville believes Arsenal’s squad still lacks leaders and expects the Gunners to miss out on a top-four finish unless both Chelsea and Manchester United ‘blow up’.

‘Is he going to, in the difficult moments of the season, be able to pull it all together? He might do.

‘I like the [transfer] window [Arsenal have had], I like everything you’ve done. Arsenal’s players that were there last season will have been burnt a bit by what happened in terms of falling away at the end [from the top four].

‘So, have they got enough experience when they hit that same situation again and they’re under pressure with 10 games to go, who is going to get them over the line on the pitch to ensure that they don’t do the same thing again?

‘That moment will come because I think they’ll be vying for third or fourth. I just think that’s when Arsenal in the past have just [fallen short].

‘I know Chelsea and Manchester United are struggling a bit in terms of where they are and they might both blow up, but I think will both have to happen in order for Arsenal to land in the top four.’