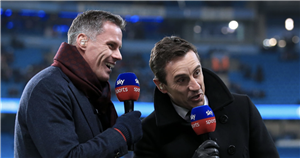 Trent Alexander-Arnold, Reece James, Kieran Trippier and Kyle Walker were all called up for this summer's tournament with Jesse Lingard most notably missing out, even after his astonishing form since joining West Ham United on-loan in January.

The Manchester United loanee scored nine goals in 16 matches for The Hammers but was still unable to convince Southgate to include him in the 26-man squad.

Neville tweeted his astonishment that four right-backs made the final selection:

"What a time to be a right back!!" said the former England international who then went on to have a sly dig at fellow pundit Jamie Carragher.

The dig is a reference to Carragher's position during his playing days, a centre-back, whilst Neville operated at right-back.

With four right-backs included in the squad, Neville's insinuation is that although it used to be an out of favoured role to play, everyone now wants to play as a right-back.

Despite it's now found popularity, the dilemma for Southgate is having four quality footballers all battling it out for one position in the starting 11.

Today, the England manager announced his 26-man squad for the European Championships after revealing a provisional squad on Tuesday last week.

Before it was revealed, Mason Greenwood announced that he would be withdrawing from the England squad citing a groin problem.

As well as the aforementioned Lingard, missing out are James Ward-Prowse, Ben Godfrey, Aaron Ramsdale, Ben White and Ollie Watkins.

England take on Austria on Wednesday evening in a Euros warm-up game at Middlesbrough's Riverside Stadium.