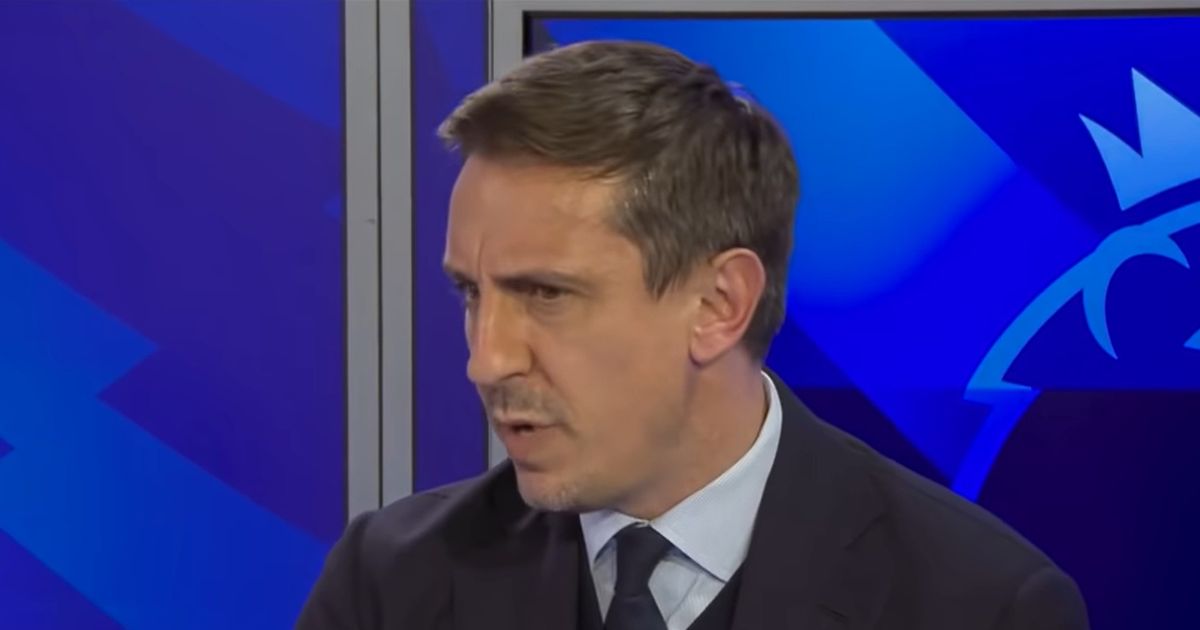 Gary Neville branded Arsenal's Rob Holding a "little boy" after the defender was sent off in the Gunners damaging 3-0 North London derby defeat to Tottenham.

Holding received his marching orders with just 33 minutes on the clock at the Tottenham Hotspur Stadium as the defender was run ragged by Spurs striker Son Heung-min. Having already been cautioned following a third foul on Korean, Holding was then sent for an early bath after a cyclical block on the Tottenham forward.

The red card effectively extinguished all hopes Mikel Arteta's men harboured of mounting a comeback after Harry Kane had put the home side in front from the spot. And it's fair to say a disbelieving Neville was left less than impressed by Holding's reckless play.

‘"What is he doing? What is he doing?! Oh my goodness," blasted Neville while commentating on the game for Sky Sports. "I’m watching the run from Son and he [Holding] has a jab with his elbow, it comes away from his body.

"He’s been erratic, rash, he’s lacked composure. It’s madness. Mikel Arteta has big problems now. His centre-back has caused him huge issues in the first 35 minutes of this match.

"We spoke about Holding earlier in the game. Son played him. He played him and played him, like a little boy. Sometimes as a defender your head goes, you’re emotional and you do rash things. Son was in his head."

Should Arsenal's Rob Holding have been sent off against Tottenham? Let us know in the comments section below

Holding's woes were then quickly compounded as Kane headed home a Spurs second minutes after the Gunners centre-back was dismissed. The elusive Son then rounded off the scoring in an emphatic win for Tottenham, netting his 21st Premier League goal of the season early in the second half.

It wasn't only Neville was who left enraged following Holding's poor decision-making, either. Fellow Sky Sports pundit Jamie Redknapp was also critical of the 26-year-old, who he claimed lacked a "cool head" on the night.

Redknapp said at half-time: "There were two instances before when he could have been booked. We spoke about derby games and how it’s about having a cool head, don’t do silly things.

"Once you’ve been booked you have to be so careful. He’s got a major problem because Son is too quick for him. The second yellow could even be a red, it’s a really poor decision from him."

The result is a setback in Arsenal's hopes of a top-four Premier League finish and subsequent qualification to the Champions League. Victory over Spurs would have guaranteed the Gunners a place in Europe's elite club competition next season, as well as higher-placed finish than their bitter North London rivals, however defeat has left Arteta's side just one point above Tottenham with two matches remaining.

The Gunners will be well aware that wins at Newcastle and against Everton at the Emirates on the final day would secure Champions League football next term, but dropping points would open the door to Tottenham. Spurs welcome struggling Burnley to the Tottenham Hotspur Stadium this Sunday before travelling to Carrow Road to take on an already-relegated Norwich on the Premier League's final day.