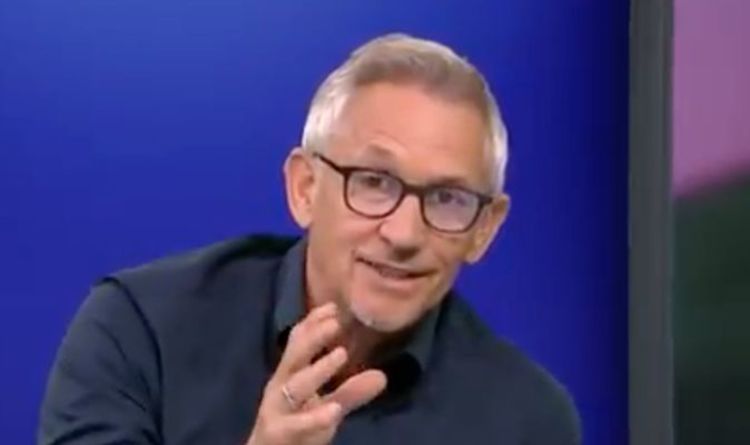 Gary Lineker could not hide his delight as he congratulated Emma Raducanu on her stunning US Open victory live on air while presenting Match of the Day on Saturday night. Raducanu made history by beating Leylah Fernandez 6-4 6-3 in the final in New York to end Britain’s 44-year wait for a women’s Grand Slam singles champion.

The 18-year-old has received praise from a number of high-profile figures after her incredible win, which many are describing as one of the greatest feats in Britain’s sporting history.

Unfortunately for Lineker and his co-hosts Alan Shearer and Ian Wright they were unable to give the game their full attention due to the fact they were halfway through Match of the Day when she claimed victory.

However, before analysing Crystal Palace’s 3-0 defeat of Tottenham, Lineker broke away to say: “You may have missed the start of the show because you might have been watching the tennis.

“If you were, you saw something special. We had half an eye on it ourselves, if we’re being perfectly honest!

Lineker later wrote on social media: “First time in my life I’ve ever tweeted whilst on air but my goodness what a performance, what a triumph, what an amazing young woman. Congratulations @EmmaRaducanu on a truly staggering achievement. US Open winner at 18 without losing a set. Extraordinarily fabulous.”

Raducanu takes home an eye-watering £1.8m in prize money after her win, and the teenager insisted the future is looking bright for the women’s game.

“It shows the future of women’s tennis and depth of the game is so great, every player in the draw has a shot at winning any tournament,” she said.

“I hope the next generation can follow in the steps of some of the legends, for example Billie Jean right here,” she added, with the iconic pioneer having presented Raducanu with the trophy.

“It means so much to have Virginia Wade here and also Tim Henman, British icons and for me to follow in their footsteps… it gave me the belief I could do it.”

Tributes to Raducanu have been paid from figures as important as Her Majesty the Queen, with the monarch posting a message on the Royal Family website which read: “I send my congratulations to you on your success in winning the United States Open Tennis Championships.

“It is a remarkable achievement at such a young age, and is testament to your hard work and dedication. I have no doubt your outstanding performance, and that of your opponent Leylah Fernandez, will inspire the next generation of tennis players.”

Elsewhere, Prime Minister Boris Johnson tweeted: “What a sensational match! Huge congratulations to @EmmaRaducanu You showed extraordinary skill, poise and guts and we are all hugely proud of you.”

The sky appears to be the limit for what Raducanu could go on to achieve in the future.

But she will no doubt now have the Wimbledon title firmly in her sights next year after gaining that valuable winning experience.

She is also now expected to earn around £100m in sponsorship deals.